Evgeny was a hard-working miner born and raised on a small isolated island located on the Baltic Sea. He spent his entire life on the island living an honest, simple, yet hard-working existence largely sheltered from the outside world. Growing up, he had a close bond with his mother who always told him to be wary of people with money and wealth, teaching him that the working class honest Joe was more reliable and trustworthy than any rich capitalist. He also mistrustful of outsiders.

When old enough he began working in the mines and the large coal deposits located underground was the main source of income for the island. He later married another island resident with a strong personality who endeavoured
to teach Evgeny English. She also specialised in maths and arithmetic and Evgeny would often remark that he never understood women. 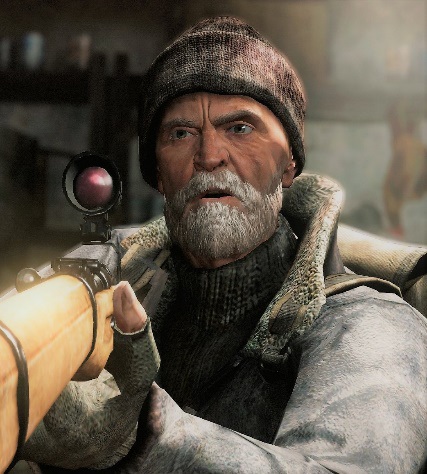 By the late 1970’s the coal industry fell into decline on the island and Evgeny often stressed about their future. He never had any desire to leave the island and the prospect of working in the outside world troubled him. In 1988 they had their first daughter as Evgeny became a father to Irina, a beautiful baby girl named after his grandmother. He noted she had his eyes and nose but the mouth of his wife. Together they vowed to bring her up healthy and strong. This was a happy period in his life, especially as the mining business was also picking up again and he wanted to ensure Irina experienced the same feelings of happiness when she was older. It was his responsibility as a parent. To continue practicing his English he began keeping a journal to record her life as she matured.

Evgeny doted on his daughter and she grew up to be a strong and fierce little girl, much more in line with her mother than Evgeny himself. He referred to her as Kroshka, meaning babe. She would imitate her mother and her happy smile kept his worries in check over the island’s future. By 1994 the mining industry was in trouble once again and Evgeny was fearful of losing his job. The uncertainty over Sushestvovanie’s economy constantly played on his mind and he feared for Irina’s future.

By 2000, Alex Wesker had arrived at Sushestvovanie for the first time and promised to revitalise industry across the island. Evgeny accepted a new job offer to help construct a new facility beneath the mines for pharmaceuticals development, but he was very mistrustful of Wesker from the outset, remembering the values about rich outsiders his mother had taught him. He was also sad that by now Irina seemed to have a closer bond with her mother than with him. She was very rebellious and he was just an embarrassment to her, only coming to him for money or a request. By 2007 Evgeny’s wife died and a year later Irina also went to work in the mines, despite ignoring his pleas not to do so. He didn’t trust Alex Wesker nor any of the people working inside the mining facility, but by now he had a reputation for just being an insignificant, bitter old man. He was one of the few residents to take a dislike to Wesker and therefore had become isolated from the rest of the island community, viewed by many as just a stubborn dinosaur.

About a year later Irina had disappeared and never returned home from the mine. Evgeny had noticed something bad was happening to the island. People were disappearing, becoming sick, and he was witnessing strange things he couldn’t explain. Deep down he knew it was all down to Wesker. Right from the start he believed she smelled of evil, but he couldn’t prove it and the rest of the island was still under her spell.

Evgeny left his home and instead set up a solitary existence inside one of the old control rooms in the sewers. There he lived in solitude for two years, occasionally venturing to the surface to hunt for sustenance. All the while he never gave up hope of finding Irina, believing her to still be alive somewhere on the island. It was because of his isolation that he avoided detection by Wesker’s subordinates and was never fitted with a sensor bracelet or injected with the t-Phobos virus.

By early 2011, Evgeny’s heath had degenerated and had a brief run in with Claire Redfield and Moira Burton, immediately recognising them as outsiders and treating them with disdain. However, he later visited the wreckage of the Monument Tower following its destruction and rescued Moira from the rubble. He brought her back to the sewers and patched her up, ensuring she made a full recovery. He tried to teach her to hunt, saying it was vital to her survival on the island, but to begin with their relationship was fractured and filled with mistrust. Evgeny was disgusted with her liberal attitude to swearing and offensive language and would often tell her to ‘wash her mouth out with soap.’ However, as time passed, they developed a mutual respect for each other and Moira’s looks and similar age to Irina led to Evgeny also calling her Kroshka.

For six months they lived and survived together, though Evgeny’s health grew ever worse and he soon realised he was dying. He hid his illness from Moira and was determined to survive until he discovered the fate of his daughter. The sudden emergence of the Uroboros-based Revenants in the wild presented a new problem as they were killing and eating all of the game across the island. One day, at the fishing village, they found an old document with a list of names of people taken to the nearby mines to be experimented on. Irina’s name was on this list. Once at the mines, they found a letter from Irina, and Evgeny realised at last that she was dead.

Having found the answer he sought, he returned to the sewers to die, locking Moira outside so that she would not see him suffer. He was now finally at peace but his relationship with Moira inspired her to survive the horrors of the island and made her determined to repair the fractured relationship with her own father, Barry Burton. Just before he died, Evgeny finally told Moira his name, and then at last found peace.