Excella Gionne grew up in a very privileged background for the Gionne family had a vast fortune resulting from a lucrative import-export trading business. On top of that, Excella’s grandmother was a member of the famed Travis family; the original merchant dynasty responsible for the formation of Tricell itself. As well as being from a noble and storied lineage, Excella was also blessed with model-like looks and a confident personality. Her breeding and beauty had convinced Excella of her own genetic superiority, and she had a tendency to look down on others, especially men. She also inherited her father’s sharp business acumen, skipping several grades through school and breezed through university majoring in genetic engineering.

Her grandmother’s family at Tricell took notice of her talents and she was brought into their Pharmaceutical Division at the young age of 18. She was passionate, and resolved to be satisfied with no less than the top position in the company. However, although she was a gifted descendant of Tricell’s founding family, she was still a Gionne, an outcast of the Travis Empire. 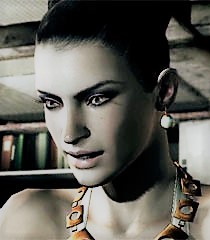 With all the in-house research teams of the pharmaceutical division at Tricell’s disposal, Excella was given just one to manage. She was humiliated by this and viewed it as in indignation. She had been in Tricell for approximately two years when she was approached out of the blue by Albert Wesker in 2003. He had spotted her talents and determination and had been watching her for a long time. He supplied her with virus information from Umbrella’s stolen archives, specifically on the t and t-Veronica viruses. His plan was for her to use this information to rise to power within Tricell so that he could manipulate her and use that power for himself. Thanks to him, Excella was armed with the tools to make the advances to her career that she desired. She used the information and technology obtained from Wesker to advance Tricell’s bioweapons division exponentially. In a fortunate turn for Tricell, Umbrella, who had previously dominated the weapons market, had gone bankrupt, greatly increasing Tricell’s sway in this area.

Thanks to Excella’s efforts in expanding Tricell’s market share, she was soon given more of a voice within the company. Before long, she was making key decisions that would affect the fortunes of the pharmaceutical division. This also included a secret deal with the F.B.C.’s Morgan Lansdale to allow Tricell’s research teams to assist with the development of the t-Abyss Virus. She was also an officer of the Global Pharmaceutical Consortium and was influential in using that privileged position for Tricell’s benefit.

In 2005 she interviewed Jessica Sherawat, requesting a report on the now completed t-Abyss Virus. Because Lansdale had gone back on his part of the deal and kept t-Abyss for himself, Excella got Jessica onto Tricell’s payroll, knowing she was already secretly working for Lansdale and ordered her to co-operate with Raymond Vester to secure a sample of t-Abyss for the company. Following a successful mission on the Queen Zenobia, the last remaining sample of t-Abyss was now in Tricell’s hands. Excella planned to use it to monopolise marine-based biological weapons production.

In 2006, Albert Wesker formally joined Tricell after faking his death for the second time and severing all ties with the ‘rival company.’ He exploited Excella’s romantic feelings towards him and persuaded her to use her newfound influence to take over the director’s position of Tricell Africa. She achieved this powerful role easily enough by using her adroit use of flattery and intimidation. This action was all down to Wesker who planned to use Excella and Tricell’s resources to further the Uroboros Plan, but Excella was too wrapped up in her own self-importance to realise she was being used and that Wesker had no real interest in her whatsoever besides being a useful pawn for him to manipulate and exploit. Her first order of business as Africa branch manager was to excavate and restore the old Umbrella Africa lab which had been closed down in the late 1990s. This was the facility where all Progenitor Virus research was carried out so its importance to the Uroboros plan was incalculable. Excella then hired Ricardo Irving to sell bio-weapons to secure increased funding for the Uroboros project.

For the next few years, she did everything she could to make her beloved Wesker’s plan become a reality. She also took care of the regular injections Wesker needed of PG67-AW. As the Uroboros Plan was neared completion in 2009, Excella began to fancy herself as the queen in the new world order that would follow the plan’s execution. When the B.S.A.A. entered the Kijuju Autonomous Zone to apprehend Irving during the field testing of the Type 2 Plaga, Excella used her position within the G.P.C. to order all surviving agents to withdraw from the area. However, this order was defied by Chris Redfield and Sheva Alomar and they were able to uncover the old Umbrella lab and Tricell’s role in the experiments. Excella attempted unsuccessfully to persuade Chris and Sheva to leave and even unleashed the U-8 creature and another failed Uroboros experiment on them whist constantly taunting Chris about the whereabouts of Jill Valentine.

Unfortunately for Excella, her dreams of being Wesker’s queen in his new world were dashed when the man that was to be her king betrayed her and injected her with the Uroboros Virus. Her DNA turned out not to be superior and her body rejected the virus, becoming just another mindless mass of black tentacles known as the Uroboros Aheri. In the end the name Excella Gionne was added to the long list of those used and discarded by Albert Wesker.