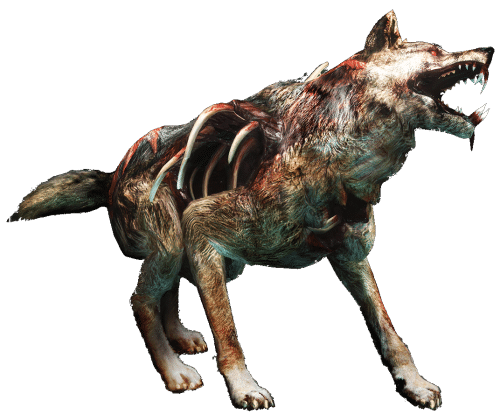 The Fenrir is an experimental B.O.W. designed to test the effectiveness of the t-Abyss virus on land-based animals. This was a wolf-based B.O.W. developed for deployment in mountainous regions. The base specimen was a Eurasian Wolf. The t-Abyss virus rots away the specimen’s chest cavity to reveal exposed ribs though any further skin necrosis is shielded by the wolf’s thick coat of fur. In addition there is also a unique discolouration around the eyes.

Compared to the Doberman-inspired Cerberus, the Fenrir is less controllable, but excels in savagery and fighting power. It is also extremely aggressive. Retaining many lupine features, Fenrirs hunt in packs, surrounding their prey and cutting off escape routes then circling and tormenting before striking. They wear their target down, allowing it to slowly exhaust itself in futile attempts to escape the closing pack in what is a long, torturous procedure. The howling of a Fenrir echoing in the mountains is a terrifying sign that they have started their hunt.

There are two variants and the black Fenrirs are the leaders in Fenrir packs, and are far larger than their regular cousins, standing easily taller than a person. They summon the pack with a howl upon sighting prey.