Finn Macauley was a rookie member of the B.S.A.A. who joined the organisation in 2012. He was honest and sincere, if somewhat timid. He held Chris Redfield in high regard and sought him out soon after joining to speak with him, but unfortunately Finn was so nervous he couldn’t get any words out. His mother always tried to encourage him to be more outgoing to improve his confidence but it was an aspect of life he always struggled with.

He trained in demolitions and explosives and his first mission with Alpha Team was the Edonian Civil War where Neo-Umbrella had supplied the Edonian Liberation Army with the C-Virus under the guise of a nutritional supplement. 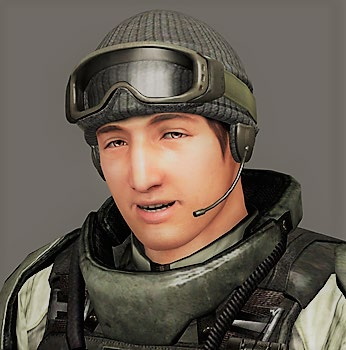 Finn was apprehensive in the build up to the mission but Piers Nivans took him under his wing and ensured he was okay. The day before leaving for Edonia, Finn wrote a letter to his mother describing how honoured he was to be fighting alongside Chris Redfield and the rest of Alpha Team. He also promised he would try to be more outgoing and asked her not to worry about him.

The mission in Edonia launched on December 24th, 2012 and Finn was responsible for delivering the mission briefing and providing details of the J’avo; the new species of B.O.W. the guerrillas were using against them. He also drove the armoured personnel carrier and used its heavy weaponry to drive back the Ogroman creature. When the team was pinned down at a train station, Finn used his explosives to clear a path through for Alpha Team to escape. Later in the mission, when Bravo Team were pinned down on a bridge, Finn bravely rescued a wounded Bravo member and helped out his hero Chris when part of the bridge collapsed. He also disabled several anti-tank guns which allowed B.S.A.A. bombers to launch an airstrike on a second Ogroman.

After Alpha Team penetrated City Hall and secured Carla Radames, Finn was tasked with looking after her. But his inexperience resulted in him becoming distracted and Carla seized her chance to ambush the whole team. Detonating a needle bomb, Finn was infected with the C-Virus and turned into a chrysalid whilst desperately pleading with Chris Redfield for help. The chrysalid then hatched and what remained of Finn was now a Napad B.O.W. The creature charged at Chris and slammed him into the floor, causing his head injury.

He was eventually killed by B.S.A.A. support troops.