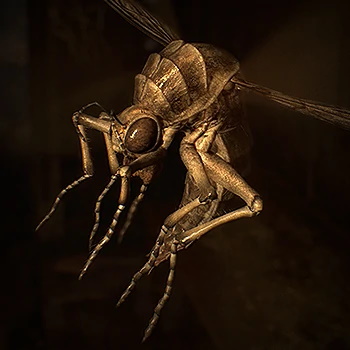 The Flying Bug refers to the swarm of insects that are effectively incubated by Marguerite Baker.

After Eveline infected Marguerite, she quickly developed a symbiosis with various insects native to Louisiana such as flies, beetles and centipedes. However, the Flying Bug is not one insect, instead a Mold created hybrid of many creatures infused into a cranefly like bug. These new hybrids are affectionately referred to as her babies by Marguerite.

Singularly, they are quite weak and can be dispatched with light weaponry, however in a swarm they pose a major threat to an enemy, using resulting in the prey fleeing from the area.

After being birthed by Marguerite, these new independent organisms began to form their own nests in the boathouse area of the Baker Farm. They and their nests are especially vulnerable to fire.