Fong Ling’s parents were killed shortly after she was born, leaving her an orphan alongside her older brother. She was taken in and raised in the care of the Chinese Government who indoctrinated and trained her as an agent, teaching her to be a cold and calculated operative, devoid of all emotion. She was expertly skilled in firearms and acrobatics and was a dedicated professional, always willing to put the mission ahead of any personal agenda.

Fong Ling demonstrated these talents by tracking down and arresting her own brother on government orders. His democratic political activities had made him an enemy of the state and she showed no emotion when he was executed the very same day. Fong Ling never harboured any animosity towards her superiors, believing her brother’s death was necessary for the good of China. 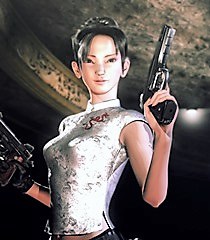 In 2002 she was called into action when terrorist and former Umbrella employee Morpheus D. Duvall, hijacked the luxury cruiser Spencer Rain and threatened to launch missiles containing the t-Virus at key targets in both the U.S. and China. As a proven covert agent for state security, Fong Ling was the natural choice for an infiltration mission. She successfully made it on board the Spencer Rain undetected and quickly saved the life of her American counterpart, Bruce McGivern, after he was caught and held at gun point by Morpheus. She threw a grenade onto the deck and distracted the terrorist long enough for Bruce to escape and Morpheus was seriously injured in the blast.

Thanks to Fong Ling’s actions, Morpheus was forced to inject himself with the t+G Virus; an experimental prototype Umbrella had recently created by fusing together the G-Virus and the t-virus to generate a protective electromagnetic field. Fong Ling continued with her mission across the ship, having frequent run-ins with Bruce yet never allowing him to compromise her movements. She referred to him as a ‘Don-Gua’ which translated as ‘idiot’ in Chinese yet she told him it meant ‘cool guy.’

Eventually, they managed to escape the ship after Bruce fought the prototype T091 Tyrant. Now on an island home to Umbrella’s old waste disposal plant and Benthic Laboratories, Fong Ling continued her mission, making her way towards the heliport. However, by this point the Chinese Government had given into Morpheus’ terrorist demands and made arrangements to pay the ransom demand, making Fong Ling’s presence on the island obsolete. Now viewed as a liability by her own government, an assassination attempt was made using a highly classified laser targeting system connected to an orbital satellite that locked onto a metallic implant in her arm. She was saved at the last moment by Bruce who frantically cut the tracking chip out of her arm and destroyed it. Despite her own employers trying to kill her, Fong Ling remained loyal to them and to the mission and vowed to track Morpheus down. She infiltrated the tunnel system beneath the island and had a run-in with Pluto; an experimental creature roaming the tunnels. She was later captured by Morpheus and used as bait to lure out Bruce.

After escaping, she guided him through the maze-like corridors of the missile silo and watched as he finally defeated Morpheus who by this point had mutated hopelessly out of control and was destroyed by his own missiles. Fong Ling and Bruce managed to escape on a life raft where they shared a romantic moment before being picked up by helicopter. Bruce tried to persuade her to return to America with him but she insisted on returning to China.