Frederic Downing was an employee of WilPharma Corporation based in Harvardville. Since joining the company in the early 21st Century he worked his way up the corporate ladder to become senior researcher. He was a well-spoken man with impeccable manners and a penchant for traditional Earl Grey tea.
Downing’s background is vague and all that is known is that he was once a former employee of Umbrella based in Raccoon City. In mid-September 1998 when William Birkin was finalising the G-Virus, Downing somehow managed to steal a sample undetected, a feat even Umbrella themselves could not manage, and fled the city just prior to the biological outbreak that engulfed the town. He also had in his possession several samples of the t-Virus and this theft was never recognised by Umbrella or any of its affiliates. Downing then erased his past and found employment at WilPharma; who at that time were an up and coming international pharmaceutical enterprise. His true intentions were to sell the viruses to terrorists as a black market broker, but he figured their value would triple if he could first create a vaccine for each and then sell them as a set. With his plan finalised, Downing had the luxury of being able to search for potential customers whilst creating these vaccines. Downing and his research team began work on the t-Vaccine first and looked for a suitable opportunity to test it. 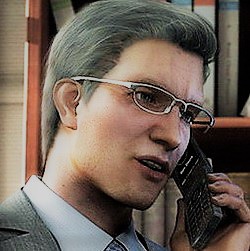 In 2002, Downing disguised himself as a black market broker and came into contact with General Grande, leader of the Republic of Bajirib and an advocator of terrorism. He sold Grande several samples of the t-Virus, sparking several small incidents in India. This allowed WilPharma to step in and test their vaccine. As part of a secret contract with the Pentagon, WilPharma conducted clinical trials in India over the next three years to perfect the reagent. By 2005, Downing declared the vaccine a success, the very same year WilPharma established a new state of the art research facility in Harvardville. Downing had been instrumental in WilPharma’s euphoric rise, working closely with Senator Ron Davis to establish the new headquarters and elevating their corporate status to replace Umbrella as the world’s leading pharmaceutical enterprise.

He made arrangements to sell a large quantity of t-Virus and its vaccine to Grande, making the General the only man in the world to possess both. However, the power-hungry leader also wanted the G-Virus, which proved to be a stumbling block for Downing as he had so far been unsuccessful in creating a vaccine. Because the virus was so unpredictable and impossible to control, Downing had shelved the G-Vaccine program and had the only sample locked down at WilPharma, although its existence remained a secret to those even within the company. Downing disliked the G-Virus, referring to it as ‘wickedly volatile and uncontrollable.’ At his time at Umbrella he had not worked on the G project and was never made aware of the ‘DEVIL’ antidote that Birkin had engineered. Nevertheless, Downing agreed to send data on the G-virus to Grande and to do this he needed a willing subject he could infect with the virus to showcase a demonstration.

Downing found his man in Curtis Miller, a troubled and depressed individual who had lost his entire family in the Raccoon City tragedy. Downing exposed Curtis to the shocking truth behind the incident, prompting Curtis to try to publically expose the truth behind the U.S. Government’s connection to Umbrella and their role in destroying the town. Downing’s manipulation of Curtis went exactly as planned and the lie was further drawn out when he had Curtis infect Harvardville Airport with the t-Virus. As a back-up should Curtis fail, Downing had one of his own employees infected with the virus travelling towards the airport on a flight from Atmos Airlines. He would infect the other passengers and the plane would crash into the airport.
Downing also arranged for most of the produced vaccine to be destroyed so that his price for selling it could go up. By this point, Curtis was a broken man and made his way back to the WilPharma HQ and injected himself with the G-Virus sample. As he began to mutate and cause havoc, Downing ensured his every action was being recorded and monitored. He also lured Claire Redfield to the facility and staged an explosion to fake his own death so he could escape undetected. G-Curtis decimated a platoon of marines but was eventually destroyed by Leon S. Kennedy and Angela Miller, Curtis’ own sister. Downing’s plan appeared to have been executed perfectly and even Claire Redfield was convinced the man behind the whole thing had been Ron Davis in an attempt to raise WilPharma stock prices. Claire only discovered something was amiss about Downing when Davis denied knowing anything about the G-Virus and she discovered the cord had been deliberately cut on the phone Frederic had used to warn her.

Following the incident, Downing contacted General Grande to arrange the details of their transaction. He waited in the woods on the edge of town with the development data for the t-Vaccine and associated samples. He reviewed the footage of Curtis’ mutation and wanted extra money for the G-Virus data and advised Grande against using it. But Downing was unaware his contact from Grande’s organisation had already been caught and apprehended by U.S. Government agents and therefore would not be coming to meet with him as scheduled. Minutes later Downing’s escape was thwarted when he was caught and arrested by Leon Kennedy, Claire Redfield and Angela Miller. He later confessed everything and WilPharma, although innocent in the whole affair, were later bought out by Tricell Inc as their public image was decimated beyond repair thanks to Downing’s scheming.