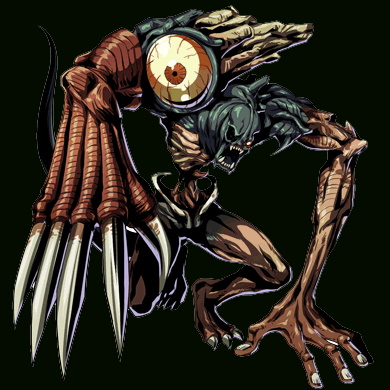 A G creature is the result of a human being directly injected with the G-Virus before the virus was completed. In this case, Curtis Miller.

These were originally designed to be weaponised B.O.W.s of the G-Virus developed by William Birkin as desired by the Chicago branch of Umbrella. However, when Birkin’s focus switched from using the virus to create new weapons to instead creating new, superior life-forms, this angered the Chicago branch and triggered a chain of events that eventually led to his death in September 1998. Consequently the virus was left in a semi-complete stage and direct injection resulted in these organisms that were simply known as ‘G’.

Whereas the t-Virus caused only a single generation of mutations, the G-Virus would keep going and affect its host at the genetic level, evolving and changing DNA to meet its needs. Direct injection created G cells in the host’s body and these cells fused with the cells of the host, eroding flesh whilst rearranging its anatomy, causing it to mutate into an unheard of life-form. This resulted in a creature that slowly lost all sense of reason and humanity, developing into a dangerous and volatile creature existing only to destroy and reproduce with a blood relative in order to spread its seed.

A G-Creature has incredibly strong life-force and amazing strength. It will also retain memories of its former life but with each major mutation it undertook, these memories would become less and less until it eventually had no comprehension whatsoever of its former existence. During the Harvardville incident, Curtis Miller injected himself with the G-Virus after being injured in an explosion. His mutation thereafter was similar, but not identical to what William Birkin experienced in 1998.

FIRST FORM G: – Its first form began the asymmetrical mutations and left the host with a moderately human appearance but the effects of the G-Virus on the host’s right arm gave it superhuman strength and a giant eyeball that grew from the shoulder and functioned just like any other natural organ. It also increased in aggressiveness and began a quest to seek out compatible hosts to try and breed. It had the ability to implant embryos into other organisms. If compatible, they would become G-Creatures, but if incompatible with the new host, the embryo grew and eventually erupted from the body, maturing into an independent organism known as a G-Adult Body. During the climactic battle with the US Army, the G-Curtis locates his sister, Angela as being a possible host for a new G-Creature. However, before this can occur, a rain of rubble from the Harvardville Facility falls on Curtis burying him the process. However, this only triggers a mutation…

SECOND FORM G: – When a G-Creature mutates into its second form, the G-Virus spreads down to infect the lower body as well, causing more asymmetrical mutations. The head of the original host is sucked down into the heart area, and a new head is grown in its place, including a whole new brain. Other mutations included a different bone and skin structure and the development of new organs exclusive to G. In addition, large claws grew out of the hand. G-Curtis now relentless stalks Angela with increased agility. Eventually, G-Curtis is downed by Leon S. Kennedy shooting off a stray tentacle of G that was wrapped around Angela’s leg. This see’s G-Curtis fall to fiery death as the elaborate self destruct sequence takes his life.

His remains will later be acquired and a G-Virus sample by Tricell.