The G-Virus was the result of an experiment to implant the NE-α parasite into the body of Lisa Trevor. The parasite was a prototype designed to increase control capability over Stage3 t-Virus B.O.W.s but proved to be too volatile and would kill its host within five minutes of implantation. Arklay Labs researchers decided to test the NE-α on Lisa Trevor because her numerous exposures to the Progenitor Virus over two decades had left her with an extraordinary vitality. Initially the experiment seemed to work but when the parasite entered Lisa’s brain, it suddenly disappeared and subtle changes were observed in her DNA. Closer examination of her cells revealed the original form of the G-Virus.

This epochal discovery deviated from the t-Virus Project and William himself immediately drew up the “G-Virus Project” to headquarters and obtained approval after several years. This project became the sole focus of his work for the next decade. 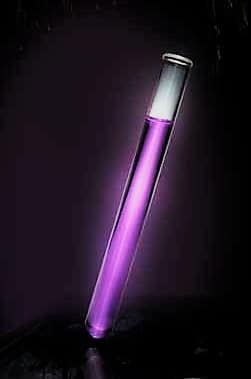 The fundamental difference between the G-Virus and the t-Virus is that G infection creates an evolutionary process in its host that would eventually lead to an entirely new life form. The t-Virus only caused mutations in a single generation of organisms, whilst the G-Virus was capable of reproducing itself in the form of G-Creatures. In other words, the G cells brought about by the virus fundamentally changed its host organism’s body structure, while simultaneously feeding off that body and rearranging its biological structure. This was how those infected by G underwent such dramatic evolution. Through this method, infected individuals repeated unpredictable change and became an entirely new species with the ability to propagate. G breeding was performed by implanting embryos proliferated in its body into other creatures. In this case, G tended to instinctively search for hereditary close relatives as a normal G was more likely to be born when the genetics of the host were close to the target creature. In addition, the G-Virus was even said to bring the dead back to life.

All this lead to the inescapable conclusion that the G-Virus was a monumental importance and even more wondrous than the t-Virus. But unlike creatures created through t, G infectants could not pass the virus on through physical contact such as bites and open wounds. Direct injection of the G-Virus revitalised cellular functions, leading to increased muscle mass with multiple mutations across the upper body and extended claws on one arm. The most distinguishing feature of an organism infected with the G-Virus was the appearance of an enlarged eyeball on its mutated shoulder. The host was granted increased strength and durability alongside a totally unprecedented regenerative capability. Severe injury would lead to endless cycles of further cellular mutations, allowing it to adapt to the environment and become stronger. But with each mutation cycle, the host became more de-stabilised, losing more of its former memory and being onwardly driven only by instinct. Initially the virus was to focus on creating G-Creatures for the purposes of biological warfare as weapons.

However, as Birkin researched further he began to realise that the evolutionary properties the virus contained could potentially lead to the creation of a superior race of human beings, or ‘G-Humans.’ Whilst the t-Virus just induced random mutations, the purpose of the G-Virus was to induce mutations that could evolve the subject into a new breed, or a separate stable species. For example, if two dogs were to be successfully infected with the G-Virus, the resulting G-Dogs would be able to breed with each other, creating a superior society of new organisms. Therefore, the ultimate goal for William Birkin was to create and breed G-Humans by using the virus to create an evolved race of meta-humans. This was the reason the G-Virus was sometimes referred to as the ‘God-Virus’ and as a result Birkin changed his focus and tried to use the G-Virus to create a new race and not just a biological weapon. Other speculations include the G actually stands for ‘Golgotha’ after the site where Jesus Christ was crucified who would later be reborn as a god. This is symbolic of Birkin’s desire to create G-Humans and make gods of humanity.

All B.O.W.s created by the t-Virus were simply mutations replicated through cloning, but a compatible G would negate this need because it would simply increase its number and spread through reproductive activity. But as G-Virus research progressed, Birkin’s efforts to create a superior species were hampered by constant pressure from the Chicago branch of Umbrella who desired more conventional weapons built for combat. To this end, by the time Umbrella sent agents to forcibly retrieve the virus from Birkin in September 1998, his research was not finished and the virus was still incomplete, meaning that when he injected it into himself, the virus caused severe deformities all over his body and instead of an advanced G-Human, he became just a standard G-Creature; an abnormal monstrosity destined to slowly lose all self-consciousness and intelligence, driven solely by the instinct to breed with blood-relatives. Upon invasion of the host body, G-Cells fused with the cells of the host, eroding flesh while rearranging its anatomy, causing it to mutate and evolve into an unheard-of life-form. In essence, any human incompatible to the virus would become a G-Creature rather than a perfect G-Human. This was a B.O.W. boasting abnormal regenerative ability with autonomous replication possible in the form of using an embryo grown inside infected individuals to parasitize other victims.

Once implanted, the G-embryo could take all the time it needed to fuse with its host body, so long as the body’s immune system didn’t resist it. When this fusion was completed, the host body’s cell structure was swapped out entirely for the virus, and the organism evolved into a G. But if the infected subject was not a close genetic or hereditary match, the G cells caused dramatic rejection and as a result it would evolve into an imperfect creature called a ‘G Adult Organism.’ When normal G cells were unable to fuse with a host, a G Adult Organism was born after destroying the host’s body from within via bursting out of its chest, and repeating pseudo-replication. Therefore, from the moment it was born it had none of the original host’s features and transformed into an extremely distorted appearance. Although there were few samples and its detailed ecology is unknown, it was confirmed to produce a small creature called a “G Young Organism” in its body.

After the U.S. Government, Umbrella and the ‘rival company’ recovered samples of the G-Virus following the conclusion of the 1998 Raccoon City incident, further research was conducted yet the virus was never perfected due to its volatile nature. Even pharmaceutical company WilPharma shelved plans to create their own vaccine for G, despite their earlier success in creating a vaccine for the t-Virus. It seemed no one other than William Birkin could perfect the virus and that opportunity was taken away from him because of Umbrella’s own greed.

DEVIL ANTIGEN BODIES – There is some dispute as to whether the DEVIL was a vaccine or simply just a stabilising agent for controlling the G-Virus’ sudden mutation to help reduce the chances of the infectant becoming a G-Creature. Once infected by the G-virus, the host body’s cell structure was broken down and slowly replaced by those from the virus. The Devil Antigen attacked the G-cells at their most vulnerable rear defences and so as long as this process was in its early stages it was perfectly possible for the antibodies to reverse the cell fusion process as they had plenty of time to do their job. DEVIL was developed mainly by Annette Birkin and required a special method of production.

Firstly, the cartridge for storing the vaccine base was placed in the VAM. After preparation of the vaccine base was completed, the white vaccine base had to be set into the vaccine generation machine inside the P-4 Level Laboratory. Once the creation program has been activated, the process would begin automatically by starting the generating program. If the above process was finished, processing would be completed in about 10 seconds and the vaccine would be synthesized. However, because the completed vaccine was extremely susceptible to shock or sudden temperature changes, utmost care was required upon its handling.

Although no perfect G-Humans were ever recorded, Sherry Birkin was administered the DEVIL antigen after being impregnated with an embryo by her father, William. Although DEVIL halted the spread of the virus within her body, small traces of G-Virus remained and adapted to her body. Physically she stopped aging at the age of around 20, making her look younger than her actual age. She also gained astonishing regenerative powers, including the ability to heal to blunt force physical trauma and invasion of foreign objects in mere seconds. There is no doubt that Sherry Birkin was the closest thing to a G-Human the world has ever seen.