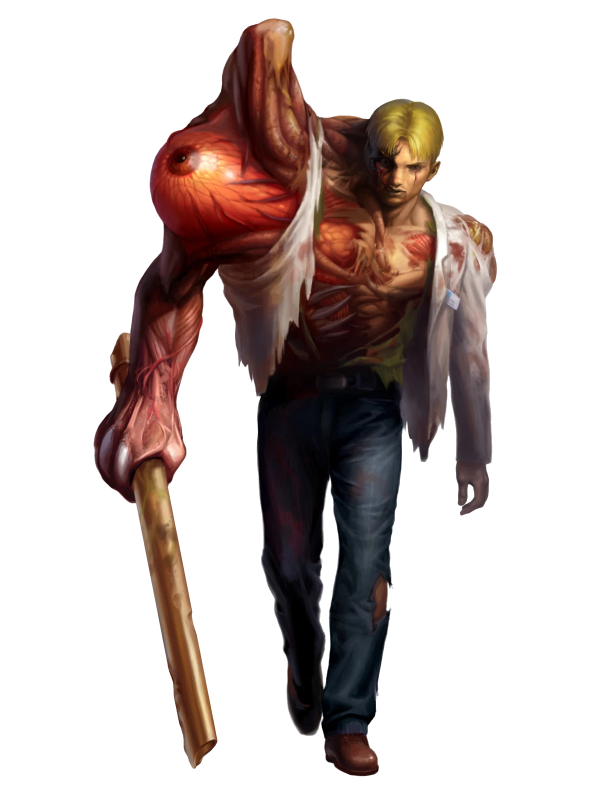 A G creature is the result of a human being directly injected with the G-Virus before the virus was completed. In this case, Dr. William Birkin.

These were originally designed to be weaponised B.O.W.s of the G-Virus developed by William Birkin as desired by the Chicago branch of Umbrella. However, when Birkin’s focus switched from using the virus to create new weapons to instead creating new, superior life-forms, this angered the Chicago branch and triggered a chain of events that eventually led to his death in September 1998. Consequently the virus was left in a semi-complete stage and direct injection resulted in these organisms that were simply known as ‘G’.

Whereas the t-Virus caused only a single generation of mutations, the G-Virus would keep going and affect its host at the genetic level, evolving and changing DNA to meet its needs. Direct injection created G cells in the host’s body and these cells fused with the cells of the host, eroding flesh whilst rearranging its anatomy, causing it to mutate into an unheard of life-form. This resulted in a creature that slowly lost all sense of reason and humanity, developing into a dangerous and volatile creature existing only to destroy and reproduce with a blood relative in order to spread its seed.

A G-Creature has incredibly strong life-force and amazing strength. It will also retain memories of its former life but with each major mutation it undertook, these memories would become less and less until it eventually had no comprehension whatsoever of its former existence. This above was particularly true to Birkin after he injected himself with the virus following the assassination attempt led by HUNK.

FIRST FORM G: – Its first form began the asymmetrical mutations and left the host with a moderately human appearance but the effects of the G-Virus on the host’s right arm gave it superhuman strength and a giant eyeball that grew from the shoulder and functioned just like any other natural organ. It also increased in aggressiveness and began a quest to seek out compatible hosts to try and breed. It had the ability to implant embryos into other organisms. If compatible, they would become G-Creatures, but if incompatible with the new host, the embryo grew and eventually erupted from the body, maturing into an independent organism known as a G-Adult Body.

SECOND FORM G: – When a G-Creature mutates into its second form, the G-Virus spreads down to infect the lower body as well, causing more asymmetrical mutations. The head of the original host is sucked down into the heart area, and a new head is grown in its place, including a whole new brain. Other mutations included a different bone and skin structure and the development of new organs exclusive to G. In addition, large claws grew out of the right hand and the eyeball embedded within the right shoulder expanded.

THIRD FORM G: – When in this form, the mutations have spread even further and all mental faculties are destroyed, meaning it no longer has any memory of its former existence. Physical alterations include creation of a new eye on the left thigh. It also grew two new arms and the larger, primary arms moved to the back, resembling demon-like wings. Small changes have also taken place in the heart and other organs. By now the host body tissue and the G-Virus have completely united to form the perfect G organism and the muscular tissue of the lower body developed extensively.

FORTH FORM G: – The mutations continue as G healed its own injuries to the extent that the G cells have spread throughout the entire body, causing a number of new mutations and resulting in the main body being too heavy to support on two legs, meaning it changed to four-legged, bi-pedal movements. Considering the extent of damage the G-Virus has caused, this can be seen as a natural evolution. In this form, the head and chest have morphed together, and the large jaws have become its most prominent characteristic. Its agility has also increased considerably but in order to compensate for these changes, G needs a constant fresh supply of energy and thus will feast on other organisms. Consequently, he more it ate, the more it mutated.

FIFTH FORM G: – The result of the above changes lead to a massive mutation to make the fifth form. By now its arms have changed into tentacles and its body has grown soft and pulsed like that of a mollusk. The remains of not-yet fully digested creatures protrude from its body and it has essentially become a living lump of flesh and teeth. It possessed a soft, malleable body that allowed it to squeeze through narrow spaces and corridors. It used its tentacles to whip and ensnare its targets, biting them if they got too near. It also maintained the same level of endurance and durability as its forth form, making it difficult to inflict critical damage, even with heavy weaponry.

Although the G-Creature recorded in Raccoon City was destroyed in its fifth form, it was unknown whether the mutation cycles would have continued into a sixth, seventh or eighth form. When the creature was observed there were no factors indicating the G-Creature’s evolution was coming to a halt.