Gabriel Chavez was a member of TerraSave and well-liked and respected by his colleagues who saw him as very robust and fearless. Much of his early adult life was spent in the U.S. Military where he served across many different continents and became a qualified maintenance engineer and mechanic. His time in the forces made him very intelligent and almost without fear. He was known as ‘Gabo’ to his friends. Upon his retirement, he joined TerraSave with a growing desire to help those whose lives had been ruined thanks to the global emergence of bioterrorism.

He was sent to Kijuju in 2009 in the aftermath of the Las Plagas outbreak and was chased by several Majini. He had respect for his boss Neil Fisher and also became good friends with Claire Redfield and Pedro Fernandez. Because of his military background, he referred to all his colleagues by their surname out of habit. One of his other duties in TerraSave was to service vehicles and equipment. 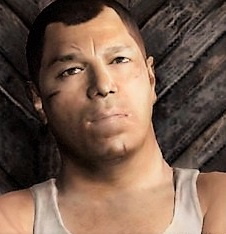 Because of his qualities, Gabe was selected as one of the candidates deemed suitable for Alex Wesker to use in her t-Phobos trials. In January 2011, he attended a TerraSave party to welcome new recruit Moira Burton when the building was attacked by armed operatives and all the candidates recommended by Fisher were taken hostage and transported to Sushestvovanie Island. Gabe later woke up in a forest alongside Fisher, Pedro Fernandez and Edward Thompson. They were all wearing sensor bracelets and he wrote a note for any more TerraSave employees who may elsewhere on the island. They were soon attacked by the Afflicted and Edward was killed. To Gabe, the creatures inhabiting the island reminded him of the Majini in Kijuju, and after Fisher diverted the creatures away, he and Pedro arrived at an abandoned fishing village. Alex Wesker had been posing as ‘The Overseer’ and instructed them to go to the Vossek; a run-down old tavern in the village and it was here they bumped into Claire and Moira. Despite his rough appearance, Gabe was quite the reading enthusiast and because of this he was able to instantly spot the quotations from Franz Kafka that the Overseer used. Gabe also found an old helicopter in a field that had belonged to a doomed traveller who visited the island in late 2008 only to be captured by its residents. He believed he could fix it and asked the others to try and find a new battery and some gas. They were successful in this task and Gabe set to work, using his vehicle maintenance skills he’d picked up in the army. But after discovering their escape attempt, Alex Wesker triggered an alarm which alerted hordes of Afflicted to the area. Amidst the chaos, Pedro succumbed to his own fear and triggered the t-Phobos virus inside him, mutating him into a powerful creature. Moira and Claire barely escaped thanks to Neil’s last-minute intervention and Gabe used the distraction to fix the helicopter and later took off alone.

But instead of abandoning his friends, he flew over to the main town and circled around, eventually locating Claire, Moira and Natalia Korda on the ground. But before he could land, Alex Wesker accused him of cheating and activated an EMP that caused the helicopter to malfunction and its systems to fail. As the chopper span out of control, the resulting panic felt by Gabe caused his bracelet to change and the virus to activate. He desperately tried to slice off his own mutating hand before eventually the helicopter crashed into a building and exploded in a ball of flame. Gabe’s charred corpse was later found six months later by Barry Burton.