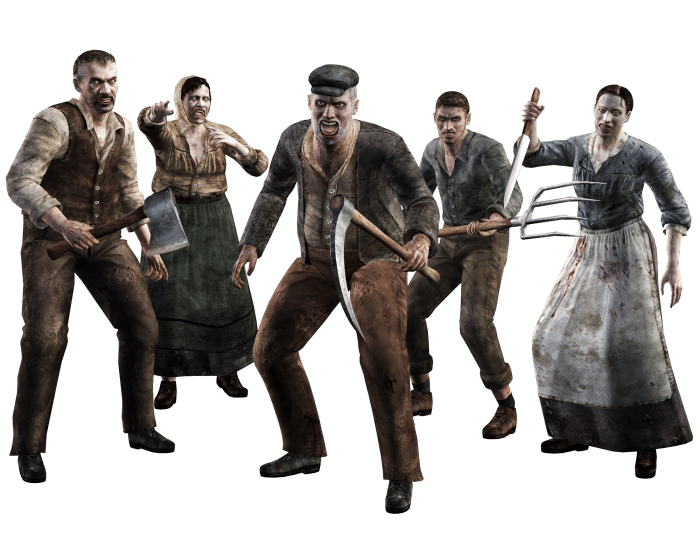 A Ganado is the result of a live human parasitized by a Subbordinate strain Las Plagas parasite. Their name comes from the Spanish word for ‘cattle.’ When a Plaga matures and integrates with a person’s central nervous system, they fall under its thrall and can easily be directed through the use of certain sounds, such as the ringing of bells. They lose all reason, becoming driven only by the Plaga’s survival instinct, and demonstrate extreme hostility towards any who are not likewise infected. They maintain their human instincts and intelligence and remain capable of setting traps, using weapons, and communicating with each other. They work together to trap a target and are susceptible to control from a carrier of the Dominant Species Plaga.

Unique frequencies not audible to the human ear are used to send directives to the Subbordinate Parasites to ensure they complete a specific task or gather in a required area. Although they appear realistically human, a trait of the Ganado is for the iris and pupils of the eye balls to turn a dull, red colour. Ganados are all adult humans because the Plaga parasites are too powerful for an underdeveloped child’s body to handle. Although they retain intelligence, they still degenerate enough to accomplish only simple tasks and will mundanely carry out work familiar to them from their time as regular humans prior to infection. The parasites also manipulate brain patterns that effect emotion and Ganados often develop increased aggression and unusual and unexpected bouts of anger. Many subjects have been documented regressing back to almost primitive ways, eating raw, rotten meat and disregarding cleanliness and personal hygiene. Unlike zombies, Ganados do feel pain and will scream in agony when struck by gunfire, but the unique abilities of the Plaga will keep their bodies surging forward, lending the appearance that even serious injury to a Ganado comes off as nothing more than a mere annoyance. They will keep on coming until a majority of their body is destroyed, and if the Plaga is still intact, it will emerge and try to escape. Significant damage means the Plaga breaks through the host’s head and starts protruding from the neck.

Their general combat ability and endurance becomes slightly higher than that of a standard Ganado and they can be identified by the A, B and C Plaga types based on the parasite’s stage of development. A-types are parasites still in the larval stage and flail around with a long tentacle with a sharp blade on the end. B-types are the mid stage between larval and adult. They spit acid and have large mouths to bite into their victims. When the Ganado’s body is destroyed, the A and B types will die with them. But C-types are adult stage parasites and are fully grown. When the base Ganado body is destroyed, the Plaga will shed its host completely then chase the aggressor as an independent organism. Several different kinds of Ganado exist, based on the kind of person they were before they were infected.

VILLAGER – Ganados made from ordinary townsfolk. The first modern appearance of the Plagas was in miners who inhaled the spores of the long-dormant parasites. Soon after, the cult began actively injecting Plaga eggs into people. These Ganados continue their communal lifestyle just as they did when they were humans. When observed from a distance it is hard to tell that anything is amiss, making them ideal as infiltration weapons. But the moment they notice an intruder in their midst they become extremely aggressive. They will swarm upon an intruder with kitchen knives, farm tools and whatever else they have on hand.

Following the conclusion of the South Europe incident, exiles looking to reclaim their ancestral home bypassed the quarantine zone and over time became infected by recessive Plaga living wild in the area. These Ganados slightly more docile since they never under the influence of a Dominant Plaga carrier. 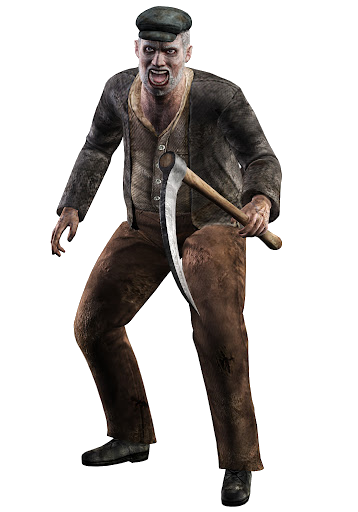 CHAINSAW GANADO – These Ganados are fewer in number and have a slightly higher genetic compatibility to the Plagas then normal, which gives them superior physical strength and endurance. They are motivated by strong, destructive urges and swing their lumberjack chainsaws in restless pursuit of those they perceive as enemies. Several Chainsaw Ganados were present in the Pueblo hamlet in Southern Europe. They had a menacing appearance and their faces were completely concealed behind large, burlap sacks. One infectant was known locally as Dr. Salvador.

Likewise the female equivalent chose to wrap their heads in bandages. Finally there was a larger man who appears to have grown unnaturally thanks to growth hormone secreted by the parasite. His strength has developed to the extent he can wield a dual-bladed chainsaw. Why Chainsaw Ganados choose to cover their faces has never been fully determined by researchers, but it is believed to be an influence of the Plaga.

Chainsaw Ganado’s were also a lot more resilient than standard Ganado and would endure substantial firepower before being downed.

CULTIST GANADO – These Ganados are devout followers of the Los Illuminados. They stand out due to their pale white skin and robes with others wearing make-up and tattoos on their faces. They can wield powerful weapons such as flails and scythes as well as firearms and other projectile weapons. The cultists who dress in the gold-rimmed red robes and goat masks have greater endurance than most cultists.

They will organise and act as commanders on thebattlefield. Like the villagers, they retain full memory of their previous existence and will often be found preaching to altars and taking part in incantations and teachings of the cult’s religion.

MILITIA GANADO – These are former soldiers that have been purposefully infected by the parasites. As trained combatants, many of them carry heavier equipment than standard Ganados. Additionally they are more organised and have a better understanding of tactics. They utilised many weapons used by the cultists as well as advanced weapons such as stun road, morning stars and automatic firearms. Some also wear helmets and body armour to protect themselves from harm. Their skin has a flecked, grey-like appearance.

A unique Ganado who carries a large Gatling Gun. He wore a beret and eye patch over his right eye. Interestingly he also tended to smoke large cigars as a leftover habit from his time as a normal human. Though normally his Gatling Gun would have to be mounted for him to be able to lift it, the Plaga inside him gives him the strength to wield it with his bare hands. He has no sense of ammo preservation of precision aim and will just spray an area liberally with bullets in the rough direction of his targets. Although immensely strong and dangerous, his tactics are predictable.

Other Ganado types have also been documented. In 2011 a strain of Synthetic Plaga was used to create a group of more docile Ganado. Thanks to the flaws embedded in the parasite these Ganado were much more zombie-like and had sluggish movements compared to their Southern European counterparts. They developed mutations with physical similarities to Type 1 infection but they boasted the reproductive properties of Type 2 parasites. Their skin turned a very pale grey but they still attack at will with no fear of injury or death and are entirely devoted to their masters.