George Hamilton was a respected surgeon working in Raccoon City and was married for many years until becoming separated from his spouse. By September 1998, he was attempting to cope with the break-up of his family and the stress of working long and demanding hours at the hospital. What became of George’s family is unknown but it is thought they were not in Raccoon City at the time of the incident and had moved to a neighbouring town following the divorce.

George lived in relative luxury due to his highly demanding occupation and was very well-spoken. He had a naturally active lifestyle and felt relaxed when out camping or hiking. He was proud of being a doctor and sometimes romanticised his profession, which also contributed to his divorce from his wife, although he would be the first to remark she was not without guilt herself. Whilst working at the hospital he had a reputation for never taking the lead or calling the shots, but he did possess a cooperative spirit and had the power to naturally acquire the trust of others. These were traits he carried over during his desperate plight to escape Raccoon City as the t-Virus
tightened its grip over the city. 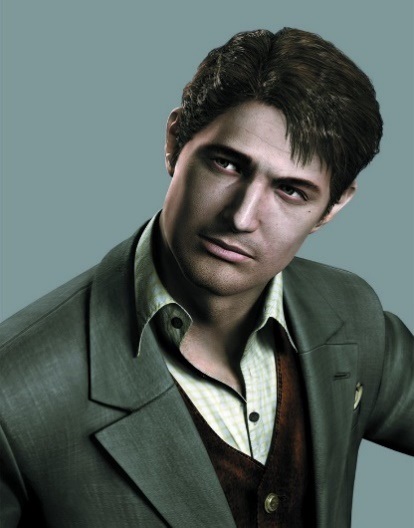 Outside of work he had a passion for clocks, watches and watchmaking. He had a large personal collection and had taken a great interest in the various timepieces people wore around him. He also liked outdoor pursuits, particularly canoeing and hiking, and he had a close friend in Raccoon City named Peter Jenkins who was a professor at the university. George was a former student there himself and that was how they had first become acquainted. Peter had a hand in developing a vaccine for the t-Virus known as Daylight. Because of the deep trust he shared with George, Peter shared this dangerous secret only with him.

George was relaxing in J’s Bar during the night of the outbreak in Raccoon. He managed to escape and spent the next week running and hiding in various locations across the city with a pocket of other survivors. He got on especially well with a waitress from J’s called Cindy Lennox and the two became close during their travels.

By October 1st, George was sheltering in the underground car park of the R.P.D. where he found a note on the wall from Peter requesting his help. Immediately he made his way to the university to look for his friend but Peter had already been murdered. Following the instructions he left behind, George attempted to make the Daylight vaccine, whilst at the same time evading U.B.C.S. troops and the escaped Thanatos Tyrant. But eventually George and his fellow survivors prevailed and managed to escape the doomed city with a sample intact just minutes before the missile wiped out the town.