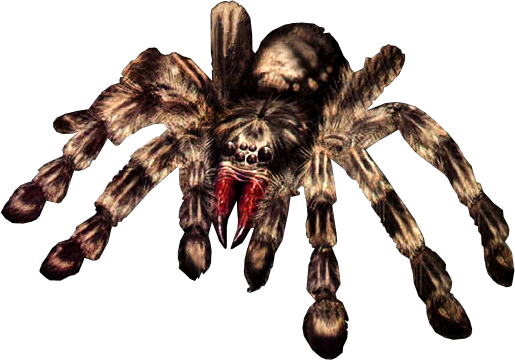 Giant Spiders were the result of early tests using arachnids as a base to evaluate growth effects of the prototype t-Virus on certain organisms. When further tests were conducted the weaponised variants became known as ‘Web-Spinners’ whilst the term ‘Giant Spider’ was used to refer to any sub-species of spider that became secondarily-infected by the t-Virus such as those found in the bowels of the Management Training Facility and the sewers beneath Raccoon City. The most notable attribute of a Giant Spider is its increased size and increased levels of toxicity in its venom. Gigantism caused by t-Virus infection is an effect that would prove to be particularly strong in arthropods such as insects and spiders. They often like to ambush their prey by lying in wait on the ceiling or wall using their enhanced mobility and projectile venom to ensnare their target.

Although the virus caused them to grow in size, they were not quite as large as the Web-Spinner and therefore retained the ability to spin webs. They bred in large numbers and female Giant Spiders also carried sacs of their young in their abdomens. If anything happened to the mother, the sac would burst and the little spiders would emergeand attack anything they perceived as a threat. These little spiders were still small enough to be stepped on but were dangerous in large numbers. Overall the differences between a Giant Spider and its weaponised cousin the Web-Spinner are minimal.

WEBSPINNER – The Web-Spinner was one of the earliest t-Virus B.O.W.s and was developed at Arklay Labs. The key difference between a Web-Spinner and a Giant Spider was that a Web-Spinner grew so large it became unable to actually spin any webs, though it still possessed the spinning gland to make its thread. This was a somewhat ironic development considering their name. Its main method of attack was to secrete and spit a corrosive liquid capable of poisoning its victims.

The re-writing of its DNA caused the spider to become huge and its naturally grotesque appearance was enough to put the fear of god into its prey. The Web-Spinners were also noted for their ability to spread the virus in a large, expanding radius thanks to their ability to climb walls and ceilings. Researchers noted that whilst the application of the t-Virus made the specimens become large and aggressive, its overall behavioural pattern did not change and remained that of a normal spider. Its main attacking characteristic was to only prey upon targets that happen to pass by its territory and would use these to supplement its diet.

Any external control was impossible and this severely limited its practicality as a weapon. But if used as a B.O.W. it could be effective to spread the virus by reaching places other conventional organisms could not and its repulsive appearance would cause opponents to panic. As well as venom secretion, the Web-Spinner could also attack with the sharp, long nails on its eight legs and once grasping its target, it would press down with powerful forelimbs and eat. The creature would usually lurk in dark, confined spaces due to its lack of ability to spin a nest. But ultimately because of low intelligence, natural aggressiveness and an inability to program with commands, the Web-Spinner project was eventually scrapped.

BLACK TIGER SPIDER – The Black Tiger was the result of a web-spinner B.O.W. that became secondarily exposed to further t-Virus infection.

The Web-Spinner was an early B.O.W. that was soon scrapped, but several subjects were kept alive for data collection. One of these specimens underwent further experimentation and this was distinguished from other specimens by the unique, black markings on its body. When it got loose in the courtyard tunnels, it survived hidden in the darkest corners and preyed on researchers and survivors walking through. Compared to a normal Web Spinner, the Black Tiger has a much larger physique and exceptional vitality. Its ability to spin webs and create a nest returned and it turned one of the underground rooms into its sanctum. It is unknown why the Black Tiger underwent further mutations and why its web spinning ability returned, but these advantages allowed the spider to hunt and kill prey in a much more spider-like fashion. It shot its web to snare unsuspecting targets and contained a large quantity of venom in its abdomen. Its webs were further enhanced by this venom, and it could also spit at its targets, causing horrible disfigurement. Its abdominal cavity also protected countless offspring. Victims were drained of blood and spun in webs left hanging down from the ceiling, allowing the baby spiders to eat at their leisure. 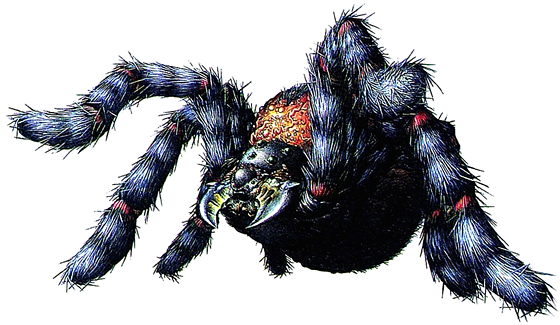 BLACK WIDOW SPIDER – This spider was a B.O.W. created by Umbrella based on data collected from a series of secondary infected arachnids observed in Raccoon City. The base organism is the titular black widow and possessed a phenomenal vitality unseen in previous arachnid models. Additionally it could move around lightly and efficiently even if its abdomen was destroyed. It was extremely poisonous and a curious effect of the t-Virus was a colouration change from deep black to green and purple. But its main distinguishing feature was its completely hairless body. It attacked its prey by secreting a highly toxious venom or by climbing up its prey and wrapping its legs around their body to restrict escape movement. It was also completely resistant to anti-B.O.W. gas countermeasures.

A single, giant specimen was observed in the South Pole facility following secondary exposure to the t-Virus and changes to its environment. It exhibited the same traits as its smaller Black Widow cousins and carried its young in her stomach, just as her Raccoon City predecessors did, and released them upon death. It is unknown why a singular specimen underwent such rapid growth but it appears related to further exposure to the virus similar to the effect that resulted in the unique Black Tiger specimen at the Arklay Mansion.

Black Widows were specially developed as a B.O.W. before being sent to Rockfort Island for training purposes. They were then to be stored at the Antarctic base for transport before being sent out to all Umbrella facilities worldwide. 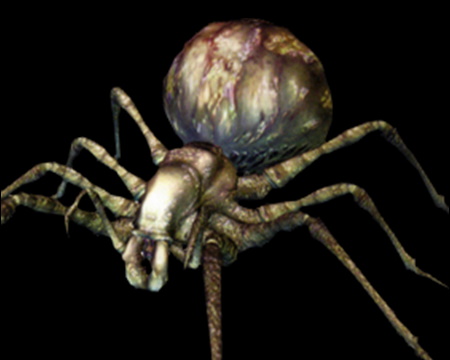 JUMPING MANEATER – The Jumping Maneater was a low-budget product created by Umbrella to capitalise on the high adaptability of the t-Virus in arachnids. The base organism was a South American jumping spider because the goal of the project was to create a spider-B.O.W. optimised for hot and humid climates. Like other spiders, the virus had a profound effect on size, with the adult spider growing hundreds of times bigger than it normally would. It retained its ability to spin webs and proved to be a worthy alternative to the Web-Spinner. The Jumping Maneater was mass-produced and several batches were purchased by Javier Hidalgo and sent to Amparo where they were able to thrive in such a hot jungle environment. But like all arachnid based B.O.W.s, its intelligence was low and it could not be controlled. During the 2002 Amparo incident, a number of specimens were released into the Waterside village of Mixcoatl where they killed a number of villagers. 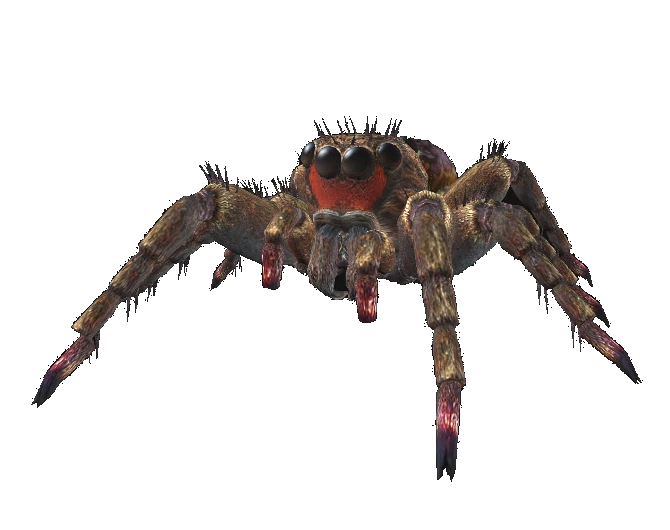 GIANT WHIP SPIDER – Giant Whip Spiders are the result of Amblypygi arachnids on Sushestvovanie Island becoming secondarily infected with the t-Phobos Virus. Although usually harmless to humans and possessing no silk glands or venomous fangs, viral infection caused them to grow up to 10 times their original size and become much more aggressive, both common traits in Chelicerata arthropods infected with a t-strain virus. Giant Whip Spiders possess eight legs but only used six for walking, leading to a sideways crab-like movement. The final pair of legs are sensory organs. Their bodies are broad and highly flattened, with a solid carapace and a segmented abdomen.

They use their pedipalps to attack and hold their prey. Because they are not native to cold climates, the Amblypygi species were originally brought across to Sushestvovanie for research purposes and exposure to t-Phobos also caused them to breed in large numbers. They can scale walls and cliffs with ease and often like to attack in large groups. But despite possessing a solid black carapace, they are surprisingly weak and easy to kill. Also, despite their viral infection, if they are cooked thoroughly enough, they remain edible as a food source to humans.