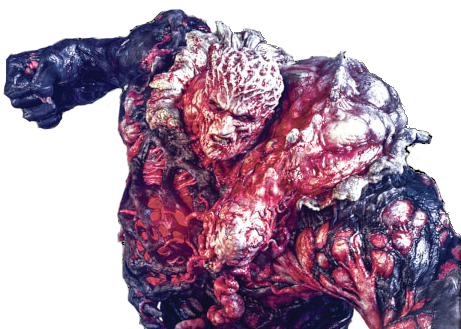 After encountering Chris Redfield in a rooftop battle, Chris was eventually able to propel Arias over his shoulders where he fell through the glass and plummeted down the atrium and was left mortally wounded on the floor far below, his body completely broken. As a contingency for such an occurrence, Diego Gomez was programmed to shed his power limiter and mutate should Arias die, that was his trigger. At this point, the Tyrant-like Gomez mutated and bonded with Arias’ body in a technique not unlike that of the Queen Plaga bonding with Ramon Salazar. This was the only way for Arias to remain alive and he was now in control of the muscular Tyrant body, with the remains of Diego’s face now grafted onto his chest and shoulder.

The mutated Arias leapt back up to the roof to confront Chris but was distracted by Leon, which allowed Christo get away and search for the vaccine for Rebecca. As Arias got the upper hand over Leon, he was confronted by the Silver Dagger B.S.A.A. team who fired at him with a rail gun. Although Arias survived, the blast tore through his shoulder and obliterated the remains of Diego. Arias attacked the Osprey and was left hanging in the air, using extendable claws to hold himself up in the air. But eventually Arias was destroyed completely when Chris later reappeared and blew him apart with a grenade launcher.