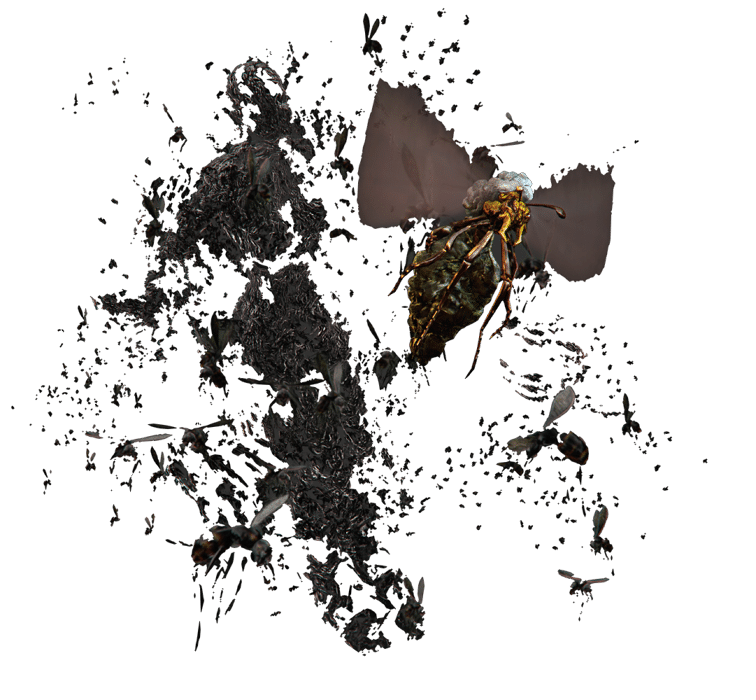 A C-Virus mutation that occurs after chrysalidification, composed of countless bee-like creatures who group together to form the silhouette of a woman. The creature is named after the Serbian word for “nest.” The queen controls the swarm from within, sharing a single nervous system with the entire cloud; as long as she lives, the creature cannot be defeated. When attacked, the individuals that make up the swarm will spread out to protect the queen—if she is killed, the Gnezdo will be destroyed completely.

Normally, Gnezdo in their human form will appear to move by walking. When they discover an enemy, part of the swarm forms a mass that is fired at the enemy from the hand of the human-shaped form. When the swarm makes contact with its target, it will surround it and start to feed. Although these characteristics make Gnezdo a formidable enemy, it can be evaded by diving underwater. The Queen is bigger than her subordinates, but her size is exaggerated by numerous pouches containing numerous small babies at the top and bottom of her body. When these pouches stress and compress, the queen is either visible or hidden, which is somewhat convincing. The Queen also becomes visible when a large contingent of the swarm moves away from the main body to attack a target. The outgoing projectile by consequence thins out the main body, leaving the queen visible.