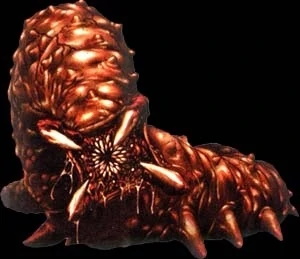 The Grave Digger was originally just a small millipede that became secondarily infected by the t-Virus. Thanks to increased contaminants from the underground lab and Dead Factory, the soil in which this arthropod dwelled underground was heavily contaminated. The millipede went through repeated moulting and metamorphosis inside this infected area and soon became a creature that bore little resemblance to its original form.

Although it maintained a worm-like appearance, it grew up to ten meters in length and its jaws became powerful enough to crush through concrete, allowing it to create tunnels and move all over the city. Its impressive digestive system enabled the creature to swallow a human being whole. When hunting prey, the Grave Digger detected vibrations of movement then sensed their distance from underneath the ground before rushing up to the surface in a surprise attack. Its huge form left the creature in a constant state of hunger and in order to maintain its bulk, it feasted on the corpses living beneath the cemetery in Raccoon Park, hence the name Grave Digger.

It was extremely hostile towards any living human it encountered because of its constant feeling of starvation. The Grave Digger also reproduced by laying eggs, sometimes in bunches of 100 that would hatch into Sliding Worms.

The Grave Digger laid its eggs in bunches, sometimes in the hundreds in the contaminated sewer zones in Raccoon City. Under these unique conditions, these eggs incubated and hatched in as little as two hours and gave birth to another irregular mutant known as the Sliding Worm. These larvae grew to about one meter in length and like the adult variety, had four small but very sharp fangs on its mouth. Its body was slimy, elastic and very flexible, allowing it to bounce along the floor as it sensed its prey.

It had incredible jumping power and was able to propel itself off the ground using powerful muscles and flexibility. The Sliding Worm was attracted to blood and used its fangs to bite and cling to its victim, sucking their blood like a leech. Just one worm could extract one litre of blood at a time but if they attacked in swarms their prey could soon die of blood loss if they didn’t escape quickly. The larva absorbed nourishment this way and had capacity to mature into a fully-grown Grave Digger in just one week by shedding its skin over and over, becoming more durable each time. 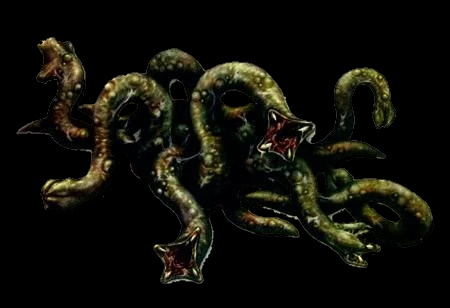