Greg Glenn was a Special Response Team member working at Harvardville and was good friends with his Captain and supervising officer, Angela Miller. He liked a drink and often got drunk whenever the team went out socialising. Although he never spoke to Angela about her brother when they were on duty, after a few beers he would admit that if he had lost his family in Raccoon City, he would have gone to the same extremes as Curtis to get justice for them.

On November 12th, 2005, Greg was called into action when the S.R.T. team were deployed to Harvardville Airport following reports of a biohazard. Although he had heard of the Raccoon City incident, Greg still couldn’t take the idea of zombies seriously. When Leon S. Kennedy arrived to co- ordinate rescue efforts, Greg immediately clashed with him and did not want to follow his orders. When they infiltrated the airport and encountered the zombies, Greg got a little too trigger happy for Leon’s liking and wasted a lot of ammo shooting at the zombies with Leon constantly having to remind him to shoot them in the head. 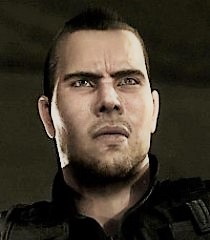 The zombies were slow and cumbersome and Greg couldn’t see them being a threat. It was only when he let his guard down and almost got bit did he come to realise the danger they were all in.

Eventually they made it to the V.I.P. lounge where they rescued several survivors, including Claire Redfield and Senator Ron Davis. Greg supported the wounded senator as they made their escape from the airport but as the zombies closed in he was bitten and infected. Bravely, he earned Leon’s respect by remaining behind to buy the others more time to escape. He later became a zombie himself and was eventually shot and killed by the U.S. Marines that stormed the airport.