Greg Mueller was an Umbrella researcher based in Raccoon City and was heavily involved in the Tyrant Project. He also later worked at Raccoon University which also had strong ties to the corporation. He was an extremely intelligent man and often believed himself to be above his superiors, regularly disagreeing with their decisions, particularly in relation to Tyrant development. He was also a doctor and at some point had developed a formula to induce partial and specific amnesia in a subject. His distinguishing feature was a pair of gold-rimmed spectacles he wore with his first name engraved inside. 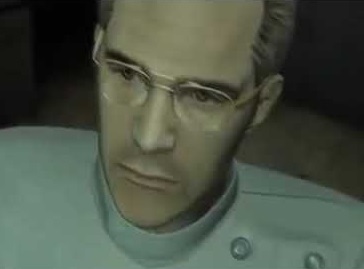 In 1993 he colluded with Raccoon Forest hospital administrator Albert Lester and was in charge of a classified experiment to provide an experimental t-Virus strain to be tested on patients. The transactions were done via one of Umbrella’s dummy companies and Lester and the staff were paid handsomely in exchange for the results of the clinical trials being sent directly to Mueller to advance biological weapons development.

A year later in 1994, Raccoon University was extensively expanded and remodelled thanks to generous funds from Umbrella and many researchers including Greg were subcontracted to work there.

In 1996, Dr. Mueller performed a clinical trial using a neutered form of the t-Virus on a group of student volunteers. One of these participants was a computer technician named Yoko Suzuki who worked at William Birkin’s underground laboratory. The experiment took place on May 14th 1996 with 13 subjects but there was some complications, leaving Yoko badly traumatised. Using his own developed formula, Mueller operated on Yoko to help her supress the memory of the experiment so deep that she could not remember it. The incident was never officially spoken of again but other researchers who knew of the tests, such as Monica, would often make cryptic remarks to Yoko leaving her puzzled and confused.

In 1998, following the mansion incident and thanks to the recovered combat data from the T-002 Tyrant against the S.T.A.R.S. members, the Tyrant Program really gained momentum with Umbrella ordering mass-production to begin. This decision left Greg very bitter, believing that Umbrella was cheapening their creations. He strongly believed that their most successful B.O.W. should be beautiful, unique, god-like, and not just repetitive killing machines rolling off an assembly line. To try and prove his superiors wrong, Mueller began utilising data from the T-103 models to develop his own, unique Tyrant specimen in the basement of Raccoon University. He intended his own creation to be the opposite of the T-103 by having an increased emphasis on intelligence and agility. Unlike the T-103’s, it was not generated from a cloned embryo and was instead constructed from a compatible African-American male. The resulting creature was named ‘Thanatos’ – named after the Greek god of death. Mueller took his proposal to Umbrella and was incensed when they wanted to mass-produce the Thanatos as a sub-species of the T-103. Mueller had always intended Thanatos to be a single, unique and magnificent specimen of perfection. He became so disillusioned he even publicly branded the whole t-Virus project a disaster and his relationship with the company naturally soured shortly afterwards. He believed too much growth weakened an organisation and that only one masterpiece should be enough.

In order to gain further revenge against Umbrella, Mueller partnered with a naive but gifted university professor named Peter Jenkins to develop a potential vaccine to the deadly t-Virus, something that if successful would destroy the very heart of the corporation’s profitable bio-weapons program and buy him more leverage in the Tyrant Project. Mueller managed to get Jenkins’ trust by suggesting he had severed all ties with his former employers and revealed some of Umbrella’s more morally questionable activities from the past, leaving Jenkins disgusted with the company. He went on to create the reagent that became known as Daylight, so named because nobody needed an umbrella in the daylight. However, Jenkins became suspicious of Greg when he somehow acquired a sample of the t-Virus for testing, despite having claimed to have left Umbrella months ago. Once Daylight was perfected and Peter realised the truth behind Greg’s past, Greg murdered him by slitting his throat.

By now Umbrella was on his trail and he was marked for assassination by Umbrella’s internal Monitor espionage group. In the final day of the Raccoon City incident, a U.B.C.S. team was deployed to the university under the command of Nikolai Zinoviev to take him out and recover a blood sample from Thanatos. This order was known as Emperor’s Mushroom. In order to buy time, Mueller released Thanatos from its slumber and it slaughtered the U.B.C.S. team watched by Nikolai from a safe distance. In the university lab, Greg confronted several civilian survivors, one of which was Yoko Suzuki and taunted her about her past. He also explained that they would be used as test subjects to gather further combat data on Thanatos. However, Nikolai, who was hiding in the rafters above, killed Greg with a single gunshot to the head.