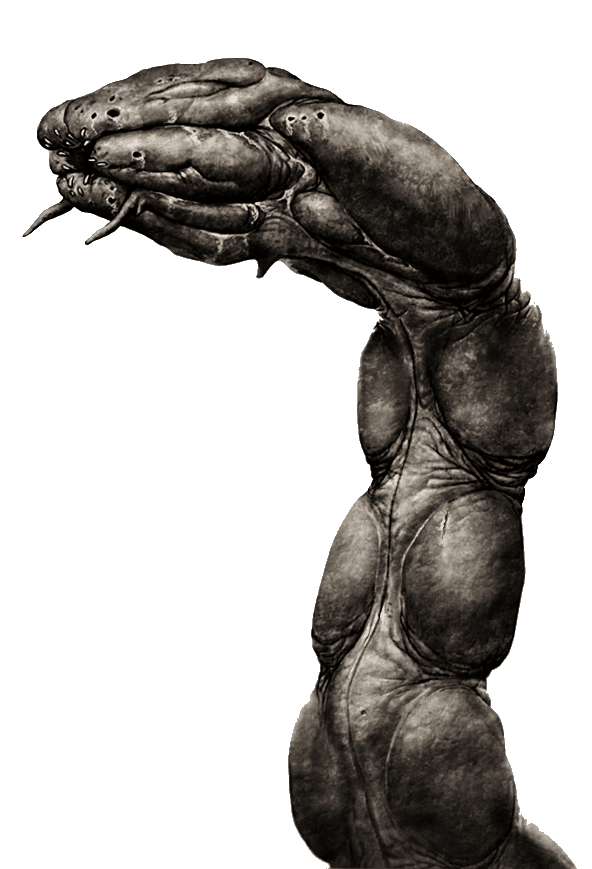 The Gulp Worm was a new weapon concept following data analysis from the arthropod Grave Digger creature observed during the Raccoon City incident.
The base organism was an earthworm that went through extensive gene manipulation and artificial strengthening before being administered with the
t-Virus. Like most arthropods, the virus caused the creature to grow to gigantic proportions and its skin hardened to allow its massive bulk to tunnel
through large volumes of solid earth and rock. Its mouth opened up like a petal and it developed strong teeth and a powerful digestive system capable of
swallowing an adult human whole.

The creature possessed no optic organs and hunted via sound patterns from vibrations in the earth. In addition it also had a powerful sense of smell to track its prey from underground before forcefully jumping out from beneath to launch its attack. It normally liked to remain dormant underground and would attack without warning. Only one unique specimen was developed and during the prototype stage it was transferred to Rockfort Island for data collection.

A series of controlled combat tests were set up against trainees of the Anti-B.O.W. Countermeasure Service present at the base. The results of said tests would determine whether the creature was to be further developed as a marketable B.O.W. During the biohazard caused by the rival company’s attack in December 1998, the Grave Digger escaped and had free roam of the island, preferring to dwell in the caves beneath the military training facility.