The Halbert was originally a failed insect experiment which was discarded and sent to Benthic Island for disposal. They were named after the same Halberd symbol used as a sigil of the Ashford family although this is believed to be mere coincidence. When the t-Virus leaked across the undersea laboratory in 2002, the virus caused the creatures to grow and develop a more potent poison secreted from their enlarged stinger. The Halbert created a hive in the enlarged plant room and a queen was nurtured to rule over them all.

They were observed as displaying similar behaviour to ants and bees moving in swarms. The mother creature produced thousands of guards from her giant abdomen in the course of one lifetime. She became so big her wings could not support her weight and she lost the ability to fly. Like regular infected wasps the Halberts are fiercely territorial and will attack anyone and anything that dare enters their domain. They are also extremely durable with the vitality of a cockroach and a hardened exoskeleton similar to a horseshoe crab.

The Wasps were secondary infectants, becoming exposed to the t-Virus either by ingesting insect carriers of the virus or by feeding on the pollen of Plant 42. The virus caused them to secrete abnormal amounts of growth hormone causing them to grow up to ten times their original size. They also had giant stingers filled with natural venom that was further enhanced by the t-Virus. Winged creatures capable of flying had the potential to spread the virus over a large area and the infected wasp would encircle its prey before thrusting its stinger into the target’s body.

The wasps were societal insects that congregated in nests, ready to attack anyone that wandered too close. Though it was possible to fend off one or two, any unfortunate victim of their attack would fall prey to a large number of the creatures when they attacked in swarms. Because their life cycle was short they often bred in large numbers and researchers noted the effects of the t-Virus appeared to vary on each wasp, resulting in different growth sizes, aggressiveness and endurance levels. Witnesses also reported sightings of a singular wasp queen which was noticeably larger than the other subjects and boasted improved killing power. 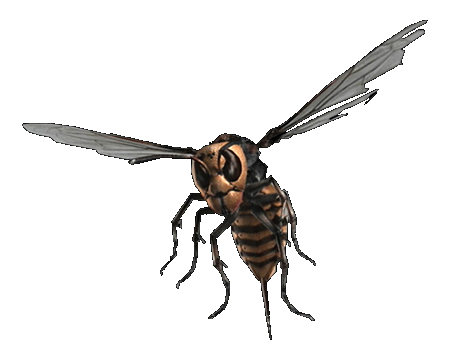