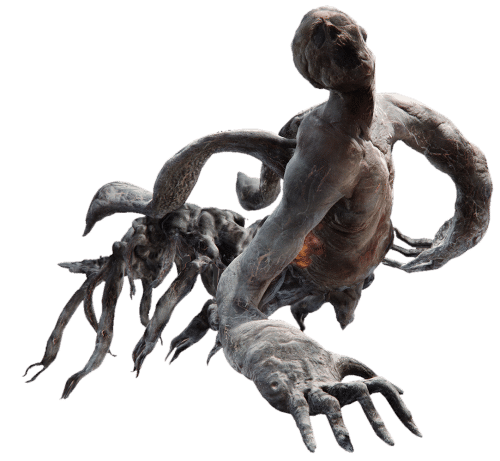 The Haos was the ultimate weapon designed by Neo-Umbrella to unleash chaos and anarchy across the world through global dispersion of a C-Virus airborne toxin. Through repeated experiments, the best elements of several other Complete Mutation Species were taken and combined into this organism. The final creature is huge and was developed over a long-period of time inside a huge Chrysalid in the hidden undersea facility. It has transparent, elasticated skin which allows the human-like skeleton and organs inside to be seen with the naked eye.

It has an organ in its body that generates a gas capable of turning living creatures into zombies, the concentration and dispensability of which is several thousand times that of a Lepotica’s toxin. Haos was Neo-Umbrella’s final weapon, created to realise Carla Radames’ vengeful destruction of the world. If its completed form ever reached the surface, it would divide and multiply indefinitely and bring about total global infection in just a few days. It is also the biggest biological weapon ever created, measuring somewhere between 20-30 metres long.

Although Haos is reminiscent of a larger version of a Lepotica, it bears more of a physical resemblance to a Rasklapanje although this is purely coincidental. Because of its size, the creature has three connected hearts and rather than muscle or fat, its skin is very fleshy and is about as transparent as a squid. Blood congests and congeals in various wrinkles and extremities, and its fingers and joints are still reminiscent of a humans. Fluids constantly disperse from small holes in its body and the composition of internal floating particles can be seen through its skin when extremely close up.

Haos was developed using a variant of the C-Virus made stronger by adding the characteristics of microbes and bacteria who were able to survive and thrive in high-temperature, extreme environments. The creature has the ability to heal itself and will reform into a Chrysalid to repair wounds and change its overall size. Like a Rasklapanje, the Haos can split its body in two and still pursue its target. It is also extremely flexible. Rather fittingly, it is named after the Serbian word for ‘Chaos.’ Because it was designed to be a singular creature with a singular purpose, records of its development were purged and the process to create Haos remains unknown. But because it was capable of infinite division, it also had the potential to reproduce and create many more like itself. This ensured its infection would spread faster and wider and make a colony of Haos creatures harder to track down and destroy.  But due to the untimely death of Carla Radames, Haos was activated prematurely at only 70.3% complete, meaning it was not yet a fully developed organism. When it did hatch, its lower body was still majorly underdeveloped. It was resistant to conventional gunfire but vulnerable to raw electricity.

Because it was not fully developed, Haos was eventually destroyed by the B.S.A.A. before it could reach the surface and begin its pre-programmed mission.