Helena Harper was an agent working for the United States Secret Service. Her parents died when she was young and her sister Deborah was her only living relative. She was a woman of strong moral convictions and was very sympathetic to the plight of others. However, she did allow her emotions to get the better of her at times and these occurrences dogged her throughout her career as an employee of the U.S. Government.

Helena’s career began as a trainee for the Central Intelligence Agency. Her superiors were impressed by her skills and the fact that she didn’t compromise her beliefs and was not one to step aside and let others take charge. She graduated top of her class and was the agency’s first choice for the job. She began as an agent in training and showed immense drive and potential, though her superiors were concerned she would let her morals get in the way of her work, and they were soon proved to be right. 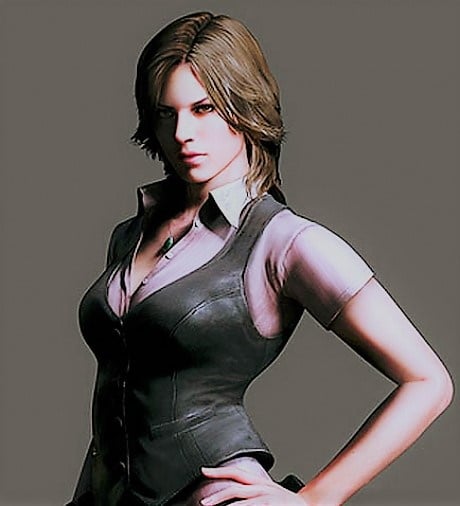 While investigating a series of murders, Helena successfully found and apprehended the killer. But in the process, she used excessive force on the suspect and was suspended from the agency. She claimed she had to shut the killer up because he was making threats in front of the victim’s family. After her suspension period was over, she found herself in situations where she couldn’t maintain her self-control. Ingrid Hunnigan believed Helena to be the ideal agent if you looked past her rash behaviour. She saw her strong will as a positive thing and recommended her as a potential candidate for the newly formed Division of Security Operations (D.S.O.). Hunnigan wrote a strong appraisal for Helena, citing her incredible abilities and strong conviction as being enough to overshadow her faults.

But as Helena’s application was under review, Deborah Harper was having problems with her then boyfriend, and when he became abusive with her, an enraged Helena lost control and ended up shooting and injuring him. Her superiors were unwilling to overlook her gross misconduct, but they didn’t want to fire her, so she was transferred to the Secret Service and her chances of joining the D.S.O. were ruined.

Helena served in the Secret Service for the next year without any major incidents, although she had a cold reputation with many of her colleagues who referred to her as the ‘C.I.A.’S problem child.’

When National Security Advisor Derek Simmons began formulating a plan to silence President Adam Benford over his desire to reveal the truth about the Raccoon City incident, he began to take an interest in Helena’s career. He needed someone he could easily manipulate in order to assist him with his plan and Helena seemed to have the ideal traits with her strong morals and beliefs. She was fiercely protective of her sister and Simmons knew that was the key to exploiting her. Additionally her mistrust and soiled reputation with her peers ensured no one would believe her should she try to expose the truth.

On June 26th, 2013, Helena and Deborah were kidnapped by agents of ‘The Family’ and brought to the secret meeting ground beneath Tall Oaks cathedral. There, Simmons blackmailed Helena into abandoning her security post at the presidential reception due to take place at Ivy University in three days’ time. This would create an opening for the president to be eliminated. If Helena did not comply, Deborah would be killed and as she was dragged away, Helena confessed she would do anything to keep her sister safe. On June 29th, Helena did as ordered and abandoned her post and leaked false information across the Secret Service radio channel that caused a change in the president’s security detail. As events began to unfold, Helena’s guilt finally caught up with her and she attempted to warn the other agents about the assassination attempt. But because of her past reputation, no one believed her. Shortly afterwards, strategically placed Lepotica B.O.W.s around town began to unleash clouds of gas laced with the C-Virus, transforming the whole population of the town into zombies. Helena desperately tried to get back to the president only to find him already infected and his zombified form feasting on the body of one of his dead bodyguards.

Zombie Benford attacked Helena but she was saved by Leon S. Kennedy. Helena was in shock at this grisly sight and blurted out that the whole thing was her fault. She promised Leon she would explain everything if he accompanied her to Tall Oaks Cathedral. Helena’s plan now was to turn herself in, but not before using Leon to rescue Deborah from Simmons. Together, Leon and Helena fought through the infected university, the sewers and the main town streets before catching a lift with some survivors to the cathedral on the edge of town. En route, Leon constantly questioned Helena but she was evasive with her answers. Her top priority was just getting to Deborah.

Upon reaching the cathedral, they fought their way underground and through the laboratory before eventually finding Deborah. Unfortunately they were too late and she had already been injected with the C-Virus. She mutated and Helena was forced to kill her own sister along with Leon and the mysterious spy known as Ada Wong. Although she was left heartbroken by this chain of events, Helena decided to use her last few hours of freedom to try and redeem herself by helping Leon expose Simmons.

Hunnigan helped them fake their own deaths and together they boarded a plane headed for Lanshiang, China, where Simmons had already fled after another bioterrorist incident had broken out. However, Simmons had anticipated their plan and planted a Lepotica on their plane, causing it to crash. At the crash site, Leon and Helena met Sherry Birkin and Jake Muller who informed them of Simmons’ location. Eventually they managed to confront Simmons and witnessed his mutation after he was attacked by a J’avo and infected with an enhanced strain of the C-Virus. He mutated into a powerful monster, but whatever fear Helena had of him was completely drowned out by her pure hate and drive for vengeance over her innocent sister. After numerous battles over several hours and several different locations, Simmons was finally defeated and the spy Ada Wong had left behind documented proof of Simmons’ role behind everything.

Following the incident and their return to the U.S., Helena confessed her crime and was ready to be taken into custody after the private funeral service for Deborah. But unknown to her, the investigation commission had reviewed all the evidence into the Tall Oaks attack and concluded that she could not be held accountable or responsible for Simmons’ actions and was acquitted. Instead she was formally enlisted into the D.S.O. having proved her abilities and played a huge role in preventing a potential world-wide catastrophe.