Veltro were a radicalised group that started out as a large organisation made up of patriotic activists before evolving into an internationally designated terrorist organisation.

The Il Veltro logo represented a hound that saves Italy from corruption and they were led by a former college professor named Jack Norman. Whilst not out and out evil, Norman was a driven, middle-aged man who pushed ahead and pursued his ideal, never questioning the ethics of his own deeds. 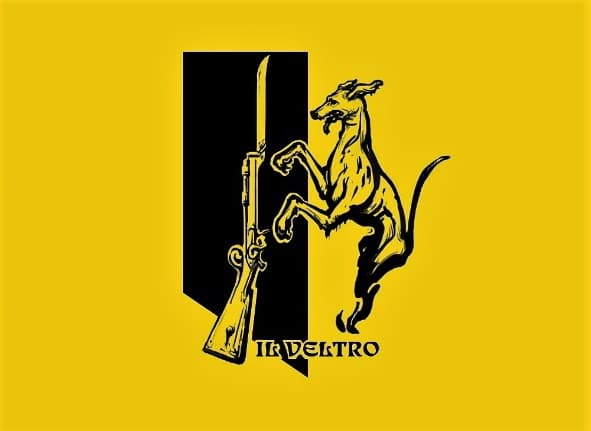 Over time his overpowering charisma gradually converted Veltro into an armed sect by introducing increasingly jingoistic policies. The group was radicalised and reduced its number to a select few individuals. Members dressed in standard military attire and their faces were all concealed with gas masks to hide their true identities. Only Norman revealed his true self to the masses and he was the public face of Veltro. Their name is a reference to the greyhound from Dante Alighieri’s Divine Comedy; a symbol that pursued greed in all its forms and eradicated it to restore world order and justice. The organisation was shrouded largely in secrecy and no one knew much about their origins other than they were originally just a student group running under a professor.

They took great inspiration from Dante and Jack Norman would spread their propaganda through video-sharing websites to make sure the voice of Veltro was heard throughout the world. But although they touted themselves as Italy’s saviours, their terrorist actions contradicted the greyhound symbol they claimed to represent. Their manifesto described destiny as being the will of a higher power and instead of the impure being cursed, their destiny is to be torn apart by the fangs of the greyhound. Veltro believed there were no victims on the Earth because everyone played their part in the creation of a world that has now become so weak. Only their members were pure of purpose and each and every one of its members were willing to sacrifice themselves for their cause of purging the world.

As they became more radicalised, their large membership reduced in number, and so did their finance, meaning they had to resort to urban guerrilla tactics to make ends meet. Their weapon of choice was the AK-47 and those loyal to the group often had family ties, such as husband and wife. Veltro was deeply opposed to the construction of Terragrigia; the unique aquapolis project constructed just off the coast of the Mediterranean Sea sustained by solar energy and environmentally-friendly green technologies. They were very vocal in their protests and did much to disrupt the project’s development. This brought their attention to Morgan Lansdale who was secretly plotting a major bioterrorist incident using the newly developed t-Abyss Virus in order to create enough clinical data to develop a vaccine.

Terragrigia was a suitable target because its boundaries as a joint European/U.S. venture ensured the F.B.C. would have full jurisdiction over any bio-terrorism related incident. This made Veltro the obvious choice to become his scapegoats. Because Jack Norman never questioned the ethics of his own deeds, this ironically made him quite easy to deceive and Lansdale had no problem manipulating him to his own needs. Lansdale secretly financed Veltro allowing them to purchase black market B.O.W.s and provided them with the t-Abyss Virus which was dispersed over Terragrigia in 2004 using an unmanned aerial vehicle. This triggered the infamous three week incident referred to as the ‘Terragrigia Panic’ and brought global infamy to Veltro. The city was eventually destroyed and Jack Norman was ready to claim a great victory until he was betrayed by Lansdale.

The t-Abyss Virus was unleashed upon the three Queen ships Veltro were using as mobile command posts and the Regia Solis activation sank the Queen Dido, leaving Norman and several of his subordinates trapped at the bottom of the ocean. Although thought dead, they survived through sheer willpower and forced ingestion of the t-Abyss Virus. Whilst a majority of their number mutated and died over the passing months, the sheer drive for revenge kept Norman alive  Morgan Lansdale and the F.B.C. later publically announced they had successfully disbanded Veltro completely, though Jack Norman was still hailed as a martyr when video footage of Veltro claiming responsibility for the Terragrigia Panic was shared globally via the internet.

Reports emerged in 2005 of a possible Veltro revival but this was in fact a staged resurrection concocted as part of an ultra-classified sting operation by B.S.A.A. Director Clive O’Brian to entrap Lansdale, whom he long believed was involved in the orchestration of the terrorist incidentat Terragrigia. The fake movement actually attracted copycats and new members loyal to the Veltro cause and their base of operations was Valkoinnen Mokki Airport high up in the Finnish mountains. Tricell agent Raymond Vester even played the part of Jack Norman to fool B.S.A.A. field agents and Lansdale himself who could not afford Jack Norman to be found alive. Lansdale firebombed the airport and sent an F.B.C. strike team down to the sunken wreck of the Queen Dido to discover the truth and the team was wiped out in a shootout with Veltro survivors who had been trapped down there for over a year.

Although the real Jack Norman was eventually found alive by Chris Redfield and Jill Valentine on the sunken Dido wreck, long-term isolation had driven him insane and he ingested the t-Abyss virus and transformed into a monster. But his video surveillance of all of Veltro’s meetings with Lansdale during the planning of the Terragrigia Panic provided enough irrefutable evidence to bring about Lansdale’s downfall and the eventual dissolution of the Federal Bioterrorism Commission. Veltro was wiped out, but their legacy claimed one final victory over the man who had set about their downfall.