Ingrid Hunnigan was a communications expert and systems analyst employed by the U.S. Government. She was the interface between the U.S. administration and the field agent, relaying instructions, keeping the agent updated via video-codec and informing them of any intelligence and mission updates from headquarters. She was also the agent’s first and foremost contact whenever they required information and help in specific situations. In later years she became a member of the ‘F.O.S.’ (Field Operations Support) as part of the Division of Security Operations operating under the direct control of the President. Born in 1980, her early background is unclear, but her calm and confident personality compliments an above-average level of intelligence suggesting she received a high-quality education. 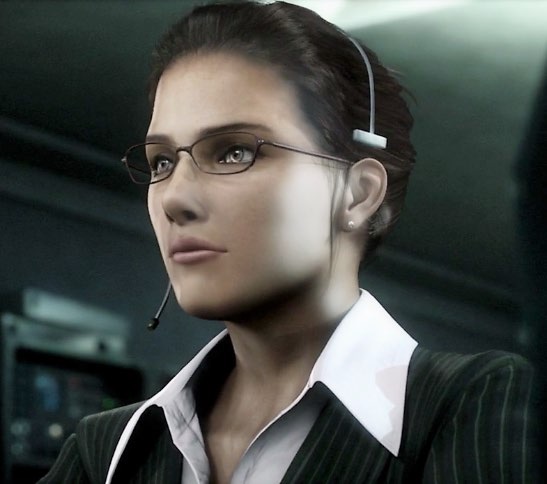 Her parents were quite inquisitive and would often ask if she had found a boyfriend. Although an attractive young woman, Hunnigan always put her work first and was very career-minded. She also had a passion for jewellery and precious stones. Hunnigan was level-headed, intelligent and competent at hacking into most security systems as well as handling the relevant mission intelligence. Her work ethic was exemplary and she often received high praise from her superiors. This resulted in a high-level of trust and Hunnigan was able to go about her business without being questioned.

In Autumn 2004, Hunnigan was assigned to assist Leon S. Kennedy in locating Ashley Graham, the daughter of the new U.S. President who had been abducted by persons unknown whilst travelling back from university. After Leon was dispatched to Southern Europe, Hunnigan was on hand throughout the operation offering advice and assistance to Leon whenever necessary. She also used her intelligence channels to uncover more information on the Los Illuminados cult. Once Leon had secured Ashley from her prison in an old church, Hunnigan arranged for a rescue helicopter to extract them both from the area, only to lose contact with the pilot shortly afterwards and conclude it had been shot down by the cult members. Shortly afterwards, her connection to Leon was cut off by Ramon Salazar who jacked the communication lines. During this mission, Hunnigan worked 24 hours a day with only one thing on her mind; rescuing the subject and successfully completing the mission. A textbook workaholic if ever there was one, she did not know the meaning of the words ‘time off’. Her colleagues, who she treated rather coldly, would often bear witness to that. But by the time she managed to re-establish communication with Leon, he had rescued Ashley and was on his way out of the hot zone area. By now, Leon had taken more than a professional interest in Hunnigan and asked for her phone number, but she playfully rejected his advances, reminding him he was still on duty.

Just over a year later in November 2005, Hunnigan was on hand to assist Leon once again during the bioterrorist attack at Harvardville Airport. Once she was able to confirm the presence of the t-Virus, she submitted a plan to President Graham who pushed through a Special Emergency Act via Congress to dispatch a convoy of U.S. Marines to the hot zone, all of whom had been vaccinated beforehand against infection. It was thanks to the marines that the outbreak at the airport was contained. Following the incident, Hunnigan wrote a transcript of the confidential meeting between Leon and Chris Redfield of the B.S.A.A. This meeting was set up to ease the tension between the two respective organisations and Hunnigan sent the transcript to Adam Benford.

Throughout the next several years, Hunnigan continued in her role as mission co-ordinator for the Secret Military Agency for a number of classified operations around the world. She also assisted Secret Service agents and when the Field Operations Support was founded by Adam Benford in 2011, Hunnigan was installed as operations coordinator. Leon, other field agents and her superiors trusted her greatly, even to the extent they often tolerated decisions she made that overstepped her authority. She was an indispensable member of the F.O.S.

In late February of that year, Hunnigan again worked with Leon as he infiltrated the Eastern Slav Republic in Eastern Europe to confirm whether or not B.O.W.s were being used in the civil war currently dividing the small country. Not long after Leon arrived, Hunnigan communicated that his mission had been aborted and that all American citizens including embassy staff were to evacuate immediately. Leon ignored this order in what became a small fracture in their working relationship. In the aftermath of the battle which brought down President Svetlana Belikova, Hunnigan explained the facts about a secret U.S. and Russian pact to take action against the illegal use of B.O.W.s. Leon was again irritated at the turn of events and this marked the only time Hunnigan’s relationship with him ever became strained. Leon had expected her to confide in him given their past working relationship but as ever her first loyalty was always to the mission at hand.

Nothing much was known about Hunnigan’s private life, which left her co-workers heavily speculating behind her back. Later that year one colleague overheard Hunnigan on the phone to her mom, apparently berating her for trying to help find her a boyfriend and develop a life outside of work. In 2012, Hunnigan supported Helena Harper’s application into the D.S.O, but was overruled and told Harper must serve in the U.S.S.S. because of her past indiscretions.

In 2013, Hunnigan was Leon and Helena’s radio operator when the bioterrorist incident occurred in Tall Oaks which killed President Benford. She relayed intelligence that the virus used was the same one reported by the B.S.A.A. in Edonia six months earlier called the C-Virus, and that a mysterious group named Neo-Umbrella were claiming responsibility for the attack. She had her suspicions about National Security Advisor Derek Simmons when he announced Leon and Helena as chief suspects in Benford’s murder and so helped the two agents fake their deaths so they could escape the town and get on a flight to Lanshiang. Once there, Hunnigan provided assistance up until the conclusion of the incident, helping Leon communicate with Chris Redfield so the latter could rescue Jake Muller and Sherry Birkin. Following the incident, Hunnigan attended Deborah Harper’s funeral and informed Helena that she would not be found guilty over her role in Benford’s death and that she could continue on active service.