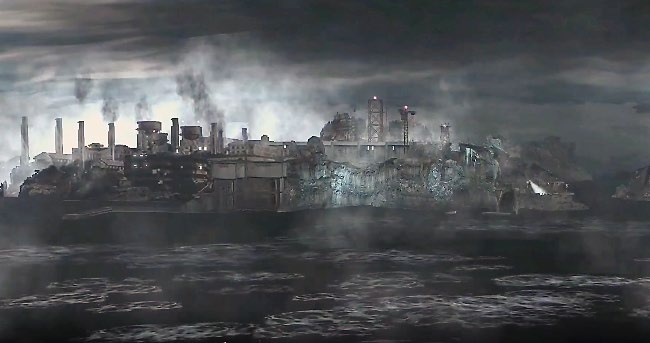 This facility was used as the main headquarters of Osmund Saddler and housed the bulk of the Los Illuminados research into the Las Plagas parasites. The island was roughly several miles in diameter and located approximately two miles off the coast of Southern Europe, on the outskirts of Pueblo and the rural region under the control of the Salazar dynasty. The castle could still be seen from the island and the Queen Plaga was held there, with a boat utilised to transfer personnel and resources to and from the island as needed. Although undisclosed, the island housed the remnants of an abandoned military facility and pre-dating the installation was the remnants of ancient ruins and an old settlement depicting cave paintings and scrawlings of long-ago human ritualistic sacrifice underneath the symbol of the Los Illuminados.

Once his operation was up and running in the early 2000’s, Osmund Saddler had his Los Illuminados minions expand and reopen the island facilities for the purpose of modifying the Las Plagas into bioweapons and desecrating life. Crude laboratory facilities were constructed and researchers like Luis Sera were hired to carry out insidious research. It was here that Sera, blinded by his fascination of the Plaga, unwittingly created the deadly Dominant Plaga variant and countless creatures soon followed including the Regeneradors and the Iron Maidens. Additionally the island was well fortified and harboured a large contingent of Ganado militia for security purposes.

The island contained a network of partially submerged caves, and along the bluffs were the ruins of an old fort. This place featured remnants of collapsed buildings and structures made into a crude guard post and lookout featuring a large search light. A trick lock was in place here and several reflective mirrors had to be rearranged to deflect a laser beam onto a prism to unlock the main gate. This followed onto a trail up the cliffs with more elevated guard positions before a side door led into the main complex. Due to the nature of the Ganado and their lack of hygiene, this place was full of rust and grime and everything was in a state of extreme disrepair.

Kitchen areas and guards rooms were a greasy mess with dining halls and storage rooms containing rotting food and supplies. On the first floor was an operating theatre where the Regeneradors were developed and a card key was needed for access to restricted areas. A terminal could reprogram the key cards for various other rooms. Further on was a waste disposal area with a mechanical crane to drop great quantities of waste underground. Beyond that was the holding cell where the Ganados kept Ashley Graham. There was also a conference room and the main laboratory where all the individual Plaga samples were nurtured and preserved under optimum temperature and lighting conditions. An alternative exit from the laboratory led back outside where a bridge crossed over to a radio tower used for external broadcasts. From this tower the whole island could be seen and it was largely industrial, housing numerous factories, chimneys and warehouses. In the lower levels beyond the waste processing area were more large storage warehouses stacked to the brim with crates and
boxes containing all manner of supplies and equipment. This area also led directly to the harbour where Saddler’s men were refurbishing an old battleship ready to launch an invasion. The outside areas were all connected by a road system and transport trucks were also utilised with large freight elevators for supply movements. Other areas of the island included a foundry and blast furnace.

Saddler had his own throne room beyond a small worship area that was protected by a complex system of lasers in the outer corridor. A hidden elevator behind the throne led down to the caves beneath the island where the testing ground for the U-3 was installed and suspended above a large chasm. On the other side of the chasm the caves led back up to the surface alongside the ancient remains of an old settlement. Remnants of stone dwellings and old pillars offered a picturesque glimpse into a time long since passed. To the east was a small fortress and a gate to the next area which was the quarry on the back end of the island. Three insignias were required to access this area. Numerous construction had taken place here and the entire area was massively fortified with watch towers and crudely constructed garrisons.

Beyond this point was the remains of an old temple, still bearing carvings and inscriptions clearly etched into the sandstone walls. This was situated next to an old prison area and the outside prison yard was heavily fortified to repel any attack. Inside the buildings beyond was the central laboratory where Ashley Graham was held during her final stages of becoming a Ganado and the connecting corridors held various research areas including Luis’ Plaga removal machine. Evidence of further construction was found across the island with partially erected scaffolding and steel girder foundations of new structures in place for further development. Most of the strategic areas on the island were completely destroyed in autumn 2004 by explosive charges planted by Ada Wong. Evidently Ada and her organisation had made secret preparations there before her mission to recover a Dominant Plaga specimen. Needless to say, Ada’s actions completely erased the results of all the experiments conducted on the island. Following this incident, the ruins of the island were left abandoned.