Ivan Judanovich was an Ataman from the Council of Elders that led the fight against the oligarch government of the Eastern Slav Republic after the divide between rich and poor became so great that civil war erupted. After the rise in capitalism following the dissolution of the Soviet Union, conglomerates gained power in political circles and business oligarchs came into power, essentially being able to buy the presidency. The poor were left to starve on the streets and it eventually ignited a rebellion.

Judanovich and his peers’ organised armed freedom fighters to fight back against the oligarch-controlled government forces. This civil war erupted in 2006, and decimated the government’s plans to get the Eastern Slav Republic accepted into the European Union. 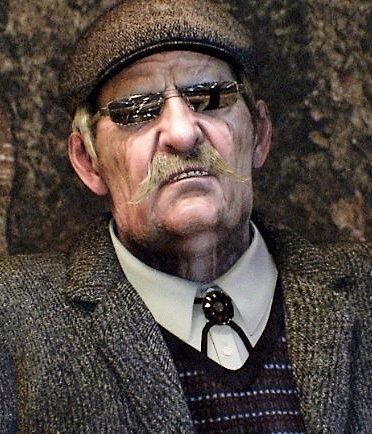 Judanovich and the others rebel leaders formed the Council of Elders which co-ordinated the rebel war strategy against the Government. When the oligarchs used their financial power to make their military stronger and better equipped, it tipped the war in their favour and so it was Judanovich who took the decision to move the rebels’ base of operations to a hidden location, a more suitable place from which they could launch their guerrilla war against the government. Judanovich was inspired by Igor Mechnikov; a poet who first pushed for independence a century earlier and fought successfully during the time of the Russian Revolutions. His poem Grace was used as an inspiration to the current day resistance movement.

Several years later, Svetlana Belikova, the Eastern Slav’s first female President, offered a cease-fire to the rebels in an attempt to improve the country’s reputation with the wider European community. Judanovich and the other elders accepted these terms but the break in hostilities was short lived. In November 2010 the government’s military suddenly resumed their attacks after discovering the rebels’ land contained valuable natural resources. The new attacks were relentless, with the government publicly claiming they were fighting terrorism. Becoming ever more desperate, the resistance fighters turned to the use of black market B.O.W.s in a bid to turn the war in their favour. However, they were unaware these black market B.O.W.s were actually supplied by a front company affiliated to Svetlana Belikova’s government named Yakovlev Security, who had been performing secret tests on Las Plagas parasites.

Picking up where Tricell had left off, her team of scientists successfully managed to create a new Synthetic Plaga cultivated in a special ‘beehive’ laboratory. This new strain had all the traits of a regular Dominant Plaga, but contained a deliberate genetic flaw to slowly regress the host into a Ganado. Belikova gave the Plagas to the rebels to let the Elders give commands to Licker Betas using ultra high-frequency sound waves. However, she knew that the Plagas were defective and would eventually spread and infect all the resistance from within, turning them into mindless Ganados.

Her government would then clean up the mess, wipe out the biohazard threat and join the long list of communities who have battled to destroy the threat of bio organic weapons, thus strengthening the Eastern Slav Republic’s political position and standing in the wider world. However, her plan did not work as fast as expected and thanks to the controlled Lickers, the resistance led by Ataman fought on. Belikova then tried a different approach, negotiating with the Council of Elders to reward them a significant slice of the oil profits in exchange for endingthe war. Every council elder agreed to her terms, except for Judanovich who sensed a trap. Taking matters into his own hands, he injected the Synthetic Plaga into his own body and used the Lickers to attack the presidential palace in the city of Holifgrad; a key strategic location for the government. Initially the plan was a success, and little by little the resistance moved closer to the city, ready to storm the presidential palace, but the defective Plaga inside Ataman was weakening him, and he had to constantly fight to remain in control of his own mind. His time was quickly running out.

When U.S. Government agent Leon Kennedy was dispatched to the country to verify the usage of B.O.W.s in the war, Ataman used his controlled Lickers to attack him, sparing his life at the last moment so he could be taken hostage and interrogated. But the strain of using the Plaga to command the Lickers had clearly taken its toll on Ataman and by this point he was severely weakened. He was also elderly and his body frail. Whilst in one of their many hideouts, Leon was being interrogated by Judanovich’s subordinate, Alexander ‘Sasha’ Kozachenko, when government forces attacked them. Minutes prior to this, Judanovich suffered a violent coughing fit as the Plaga inside him squirmed around his central nervous system.

Despite concern from Sasha and his partner J.D., Judanovich insisted he was okay. But when government soldiers rooted them out, Judanovich finally turned into a Ganado with greying skin and blood-red eyes. This distraction was enough for Sasha to attack the guards and for Leon to get free. In the aftermath of the fight, Judanovich managed to regain control of himself once again but was too weak to escape the tunnels. Knowing he could no longer control the Plaga inside him, he begged Kozachenko to end his life while he was still human and asked him to continue the attack upon the presidential palace, leading the fight in his place.

He then revealed the location where the Elders had hidden the rest of the Synthetic Plaga samples. Following this, Kozachenko shot Judanovich several times, killing him and the Plaga that resided within his body. Sasha then later took the Plaga into his own body and followed Judanovich’s wishes by launching an attack at the central palace in a bid to topple the government.