J.D. (real name unknown) was a freedom fighter opposing government forces in the civil war decimating the Eastern Slav Republic. He was young and inexperienced, yet immensely keen, very excitable, and possessed a good heart. He grew up as a good friend to Alexander Kozachenko and his fiancée Irina and would often follow them around like a lost puppy. He had a very carefree personality and even though a majority of people growing up in Eastern Slav hated America, J.D. had a great deal of affection for all things made in America such as Hollywood movies, DVD’s, music and junk food. He also tried to make this come across in his demeanour and mannerisms when engaging with people, often coming across with an excitable and somewhat stereotypical tone. 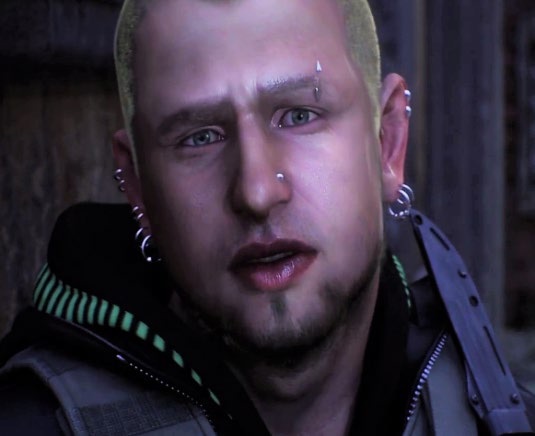 He joined the resistance at the same time as Kozachenko and whilst the latter had good reason to enlist after government forces bombed the school that killed his fiancé, J.D. joined up for no other reason than because his friend did. In truth he had no real understanding of politics and did not know anything about the unfolding situation that triggered the civil war in the first place. Although his heart was in the right place, at his core J.D. was a bit of a coward and would often hide behind Kozachenko. He did not possess any combat skills and his effectiveness with firearms was limited to his experiences watching blockbuster movies.

In 2011, J.D. was with Kozachenko in one of the rebel hideouts in the city of Holifgrad when United States Government agent Leon Kennedy was captured. Leon was interrogated and accused of being a spy for the CIA. However, J.D. was fascinated by Leon and kept asking him all kinds of questions about America and its culture. He also took Leon’s weapon and wore his body armour. After the hideout was stormed by government forces, J.D. was shot by one of the soldiers although his body armour prevented the bullet from penetrating him. He did not realise this at first having felt the impact and believed himself to be dying. It took Kozachenko to bluntly point out Leon’s armour had saved him for J.D. to realise he was okay.

After they encountered several Ganado in the underground tunnels, Leon was forced to kill them with a metal pipe after J.D. froze with fear, despite being armed with Leon’s machine gun. After they barely escaped with their lives, J.D. led them to the surface and on to the sanctuary of another rebel hideout at the church. Here, Kozachenko confronted Leon again and confessed he planned to use the Synthetic Plaga in the possession of the Council of Elders to launch an attack on the Presidential Palace. Even J.D. could see the danger in this plan and released Leon and gave him back his weapons, begging him to go and stop go and stop Kozachenko. Buddy was J.D.s closest friend and he didn’t want him to die.

However, after Leon had left, the church was attacked by a horde of Ganado and the rebels stationed there were overrun. J.D., having found the courage to fight bravely, was infected with a Type 2 Plaga. By the time Leon returned, the Plaga burst from his head and attacked, with Leon forced to kill him.