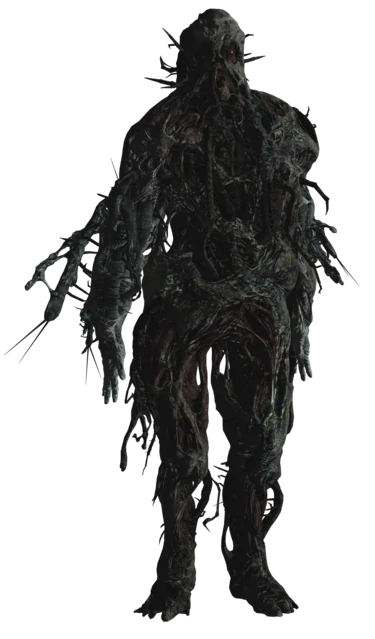 Jack Baker was infected by the bio-weapon Eveline following her escape in Dulvey, Louisiana. Like his other family members, infection was initlaly fixed by Eveline between Stages 1 and 2 thus enabling him to have great regenerative abilities.

Jack was infected after attempting to save his wife Marguerite Baker and immediately showed a dramatic increase in his temper and regenerative abilities – stabbing himself in his heart as an offering to his master. As the mold infection increased to his brain, Eveline retained full control as the head of the Baker household became a stage 2 infectant. In this phase, Jack experienced hallucinations of Eveline and began carrying out her orders without question. His regenerative powers increased and his behaviour became quite hostile. His thoughts were completely in tune with those of the E-Series asset and eventually Jack lost all sense of ego. Eveline controlled his infection and kept it restricted to the mid-stage, for if it continued unchecked the mold would eventually take over every cell in his body and Jack would lose his human form. Eveline initially saw Jack as her surrogate ‘daddy’ and she continued to manipulate him and the rest of the Bakers at will.

Jack would spend years being under the influence of Eveline and would eventually encounter Ethan Winters. He would go onto to hunt Ethan around his home suffering from injury after injury. This included shooting himself in the head. At all times he was able to regenerate, but after Ethan was successful in slicing Jack in half, he was unable to properly regenerate. This injury also severed the link to Eveline resulting in the mutamycete infection to take over fully. Jack would then become a stage 3 B.O.W. becoming extremely large and spider-like.

During the battle in the boathouse, Jack was injected by Ethan with the D-series serum which subdued the creature, calcifying it in the process. However, as Jack was an E-series biological weapon, the serum wasn’t 100% effective and Jack survived for longer in torment. Having lost his human form, he now resembled a mass of decaying skin and barnacles in vaguely humanoid form. His body was covered in centipedes and he became known as the ‘Swamp Man.’ He spent weeks after Eveline’s death prowling the woods and looking for his daughter, Zoe, but he was eventually killed by his own brother, Joe.