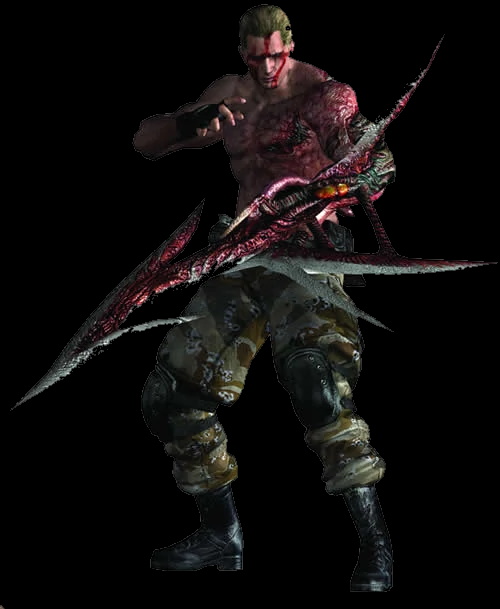 The result of the forced mutation of the Las Plagas parasite inside Jack Krauser.

During his confrontation with Leon S. Kennedy in the sandy fort, Krauser throws his gun away before triggering his Dominant Plaga mutation, wanting Leon to ‘Witness the power!’ His left arm suddenly expands and the skin rips away to reveal a bladed claw, impervious to bullets.

Krauser, having been entrusted with the Dominant Plaga retains a degree of control and ultimately his humanity and was able to mutate when he felt the situation required it.

In this case, the Plaga targeted Krauser’s known weak point – his left arm that had ironically been severely injured on his last mission with Leon in Amparo. The Plaga grew from that injury creating a shield for Krauser whilst also gaining superhuman strength and agility. Despite this, he was not impervious to attacks and through close combat knife skills from Leon, Krauser was downed.

Despite, this the Plaga had not been defeated and was only temporarily downed. It was only through the second sustained attack by spy, Ada Wong was that the Dominant Plaga and Krauser himself was destroyed.