Jack Krauser was an elite operative for the famed U.S. Special Operations Command. He was an exceptional soldier who participated in many successful operations during his distinguished career. He was recognised as a first class soldier and gained many extraordinary achievements throughout his service. His success largely came from always
throwing himself 100% into his job having never been totally comfortable in everyday society. He believed each day spent fighting in the military gave meaning to his life. Although skilled with ranged weapons such as a bow and arrow, Krauser’s real talent lay in close quarters combat and he was proficient in martial arts and could handle bladed weapons with almost surgical precision. 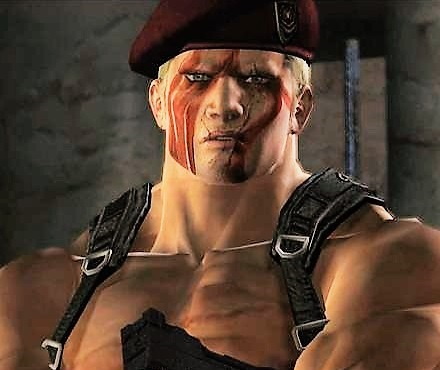 He had strong views about terrorism and believed the United States were being steered in the wrong direction which was only escalating a global issue.
But despite these private misgivings, Krauser was a fierce patriot and utterly loyal to his government.

In 2002 he was handpicked to assist U.S. Government agent Leon S. Kennedy in a mission to investigate South American drug lord Javier Hidalgo’s relationship to Umbrella. Krauser had read Leon’s file and knew of the Raccoon City incident but still remained very sceptical about the existence of zombies and bio-organic weapons. Krauser was sent into the Amazon jungle alone under the call-sign ‘Silver Dax’ and was instructed by a radio operator named ‘Hannah.’ He hitched a lift to the rendezvous co-ordinates, but the area was in the midst of civil unrest and numerous riots had broken out, leading to road blocks being set up across the region. He eventually caught a ride on a freight train and met up with Leon in a small town. His sceptical opinion on B.O.W.s soon changed when they discovered the waterside village of Mixcoatl had been ravaged by the t-Virus.

Leon and Krauser made a good team, fighting off the mutated Hilda Hidalgo creature and rescuing Javier’s daughter, Manuela. Krauser then asked Leon to fill him on everything he had encountered thus far and Leon told him about his experiences in Raccoon City. Krauser just listened in silence. Manuela then directed them up the Amazon to Javier’s dam which had also been infected. There they found Javier himself and it was revealed that Manuela was infected with the t-Veronica virus. Leon explained its origins to Krauser and all about the Ashford’s and what Claire Redfield had encountered on Rockfort Island. He also told him about the infamous Albert Wesker, and Krauser seemed intrigued about mysterious bioterrorist now working for one of Umbrella’s rival companies. They continued to fight their way through the dam, relying on each other and using their combined skills to survive.

But Krauser was also slowly beginning to see the potential of these bio-weapons they were facing and when they finally reached Javier’s mansion, their relationship hit a turning point when Leon revealed he was actually on a top secret mission for the President designated ‘Anti-Virus Weapon Protocol No. 7600’. Whilst this disclosure demonstrated trust on Leon’s part, for Krauser it left him with a bitter taste in his mouth, knowing he had been manipulated and kept in the dark about what was really going on. He failed to see why Leon; a relatively inexperienced operative, had been given special treatment just because of his experiences in Raccoon City whilst he, a seasoned veteran who had risked life and limb for his country countless times in the past, was merely a pawn. But despite this, his professionalism ensured he remained determined to finish the mission. But as they progressed through the mansion, Krauser began to understand why Javier had wanted to use the virus and was in awe the power it represented, further poisoning his mind. After finally destroying the mutated Hilda Hidalgo, Krauser received a serious arm injury during the battle, one he knew he could never recover from via conventional means. Krauser felt sick to the stomach that he now had to depend upon Leon for survival and quickly developed an inferiority complex.

Eventually, they took on Javier after he had let himself be consumed by the Veronica plant and grown to a gargantuan size, leaving Krauser staring in awe. Manuela, who was using her flammable blood to weaken the creature that had been her father, assisted them in the battle. Krauser was awestruck by the sight and his mind was totally lost to believing someone could harness and control such an incredible power. Together the three of them managed to defeat the V-Complex and as they were airlifted to safety, Krauser found himself reflecting on the notorious Albert Wesker Leon had mentioned. He knew his military career was effectively over now due to his injury and wondered if Wesker could somehow make him strong again and provide the power he now craved. Secretly, he decided to seek Wesker out and sometime later that year, he left the military and subsequently disappeared. Leon was later told he had died in an accident. Frustrated maintaining absolute loyalty to a government he saw as morally corrupt, Krauser was ready to take on a new path in life.

Krauser was never heard from again until two years later. He had been successful in making contact with Wesker and now worked as an operative for the rival company. Wesker’s current goal was to re-open his own vision of Umbrella with himself at the helm, and this was a vision Krauser now shared. Wesker was planning a mission to collect a Dominant Species specimen of the Las Plagas parasite being used by the Los Illuminados cult in Southern Europe. Krauser’s role was to infiltrate the sect, gain their leader’s trust and ultimately steal a sample. He later approached Osmund Saddler and offered his services, demonstrating his talents by successfully kidnapping the new President’s daughter whilst she was on her way home from university in Massachusetts. As a result, Krauser was taken in by the Illuminados and used as an assassin. His lust for power meant he gave into the temptation of the parasite and readily accepted a Dominant Plaga into his body. Finally he now possessed the awesome power he had always craved. But despite his new gift, Krauser’s progress in the mission was hampered because of Saddler’s profound distrust and disgust for Americans. He could never get anywhere near a viable sample to steal and so reluctantly had to call Wesker and request Ada Wong be sent in to assist him. Krauser did not trust Ada and believed she harboured treachery. During the mission he directly threatened her but she did not at all appear intimidated by his words.

Krauser eventually reunited with Leon and they fought, with him explaining he was doing all of this for Umbrella’s sake. He later triggered his Plaga mutation and developed a scythe-like arm which incidentally was the same arm he’d injured in the South America two years previously. They clashed again and Leon eventually emerged as the victor. But Krauser was not finished yet and now turned his attentions to Ada. Unfortunately he clearly underestimated her skills and she eventually finished him off for good.

In the aftermath of the incident, despite Krauser’s undivided loyalty, Wesker described him as ‘just another expendable grunt’, with the irony being that Wesker’s attitude towards him was exactly the same as his former superiors in the U.S. Government which had turned him to the dark side in the first place. In a further ironic twist, Wesker extracted the dead Dominant Plaga from Krauser’s corpse, ensuring that in a twisted way, the former SOCOM operative achieved his mission after all.