Jack Norman rose to prominence as the undisputed leader of the terrorist group Veltro, which is Italian for Greyhound. The origins of the man himself remain a complete mystery although the group began life as a faction of Italian college students which over a sustained period of time became radicalised and jingoistic until eventually evolving into a guerrilla terrorist group. Given Norman’s advanced age over his followers he may even have been a college professor in his pre-terrorist days though this has never been confirmed.

Norman ruled Veltro with absolute authority and was idolised by his followers who all pledged to die for him. He used Dante Alighieri’s Divine Comedy as his guiding principle and the group’s bible. His charisma and passion shone through whenever he made speeches of Veltro’s doctrine which were always broadcast on video sharing websites. They were a secretive group and their members retained their anonymity by always wearing gas masks and balaclavas to conceal their faces. Norman was the only one to reveal himself to the world at large and literally became the face of Veltro. 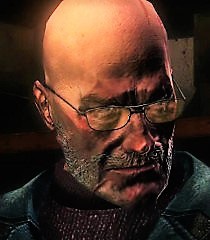 He was also very outspoken about the construction of the Terragrigia mega-float city project in the Mediterranean Sea, believing its existence to be a blasphemy and a stain on the earth. At that time, Veltro were a relatively unknown terrorist group and only ever conducted small-scale strikes and operations, but their destiny was changed in 2004 when Norman was contacted directly by Commissioner Morgan Lansdale of the Federal Bioterrorism Commission. He offered to anonymously finance Veltro and give them access to the newly-developed t-Abyss Virus in order to stage a terror attack on Terragrigia; the world’s first aquapolis. The city was a one of a kind joint American and European endeavour and powered by a solar energy matrix satellite, a feat of engineering and construction that had taken 11 years to build.

Throughout construction Veltro had been extremely vocal in its objection to the project. Lansdale’s offer was to put Veltro in the eyes of the world by having them destroy this new city, creating the largest public bioterrorism incident since the Raccoon City disaster of 1998. In return, the F.B.C. would move in and clean up the mess, expanding its power and charter in the process and giving more power and authority to Lansdale. Norman was very interested in the
proposal but was naturally very distrustful of Lansdale. The F.B.C. Commissioner offered him the use of three cruise ships for Veltro to use as their base of operations and an unmanned drone to disperse the virus across the city. With all of Veltro’s members on the ships, there would be no casualties at the hands of the F.B.C. troops and Norman could co-ordinate the attack from the harbour.

Eventually Norman agreed to the deal and Lansdale provided him with eight samples of t-Abyss. However, Norman was not stupid and as an insurance policy, had all of his meetings with Lansdale secretly video-taped so that if Veltro were ever betrayed he could expose Lansdale and ruin his career. Norman used Lansdale’s money to purchase Hunter B.O.W.s off the black market and one sunny day in 2004 they were transported into Terragrigia as up above the aerial drone dispersed the t-Abyss virus which literally rained down on the unsuspecting populace below. The incident attracted world-wide coverage as the virus destroyed the city completely over the course of three weeks. Norman fought hard, and a close encounter with a Hunter left him with permanent scars on his head. But just as he and his comrades’ sensed victory, the t-Abyss virus simultaneously infected all three of their ships and Norman immediately realised Lansdale was trying to kill them off to hide his own involvement in the orchestration of the terror incident. Norman contacted Lansdale directly and the F.B.C. Commissioner did not deny the fact he had double-crossed them. He even taunted that he would use the infected Veltro members as guinea pigs to help develop a vaccine for the virus.

Norman prepared to expose him by publicly releasing the video logs he had kept of all their interactions, but before he could act the Regia Solis satellite was deployed under Lansdale’s authorisation and the city was scorched from the sky, destroying everything within its target zone. This caused the Queen Dido to sink to the bottom of the Mediterranean still with Norman and his trusted lieutenants still on board. Trapped and with no hope of survival, Norman swore revenge on Lansdale, recording a video vowing never to rest until he had his revenge. With limited air and food, Norman and his followers were forced to inject themselves with t-Abyss in order to survive. Through sheer will and determination, many managed to fight off mutation for an extended period of time whilst others died, slow, painful deaths and sprouted huge growth-like protrusions from their bodies. The less-willed amongst them died straight away, eventually becoming creatures known as Globsters. Norman’s hate of Lansdale drove him on to survive almost a full year. He rejected the notion of death and would not let his body shut down until he was avenged. One by one his followers died around him and yet still he prevailed, waiting for the day to take his revenge.

Eventually, in 2005, an armed team of F.B.C. agents stormed the Dido looking for the video evidence and Norman killed them all, but Lansdale was not among them. By now his sanity had left him and he was not of sound mind. When Chris Redfield and Jill Valentine later arrived, he believed them to be Lansdale and attacked them, ingesting a vial of t-Abyss orally which transformed him into a creature known as the Ultimate Abyss.

Norman was eventually defeated by the B.S.A.A. agents and his dying form crawled up to the Veltro flag and declared his relief at finally being able to die. Shortly afterwards, Jack Norman was reunited with his brothers and sisters in the afterlife.