James Marcus was born in 1918 and developed an early interest in science. He attended school and became acquainted with Oswell E. Spencer at a young age. He had a brilliant mind and developed a keen passion for chess. Marcus later graduated from a top university aged 21 in 1939, becoming a prominent expert in the field of virology. He later took a job in Switzerland at a prestigious university, practicing paleobiology and the, study of extinct bacteria. He focused on evolution of specialist microbes through a virus to theorise about the formation of life on earth.

His work was successful and the talk of the university, but as time went by he began to have a difference of opinion with several professors when questions were raised about the validity of his studies. Following a scandal involving
falsified test results of which he was completely innocent, Marcus found his funding grants slashed and he was forced to turn to his old friend, Oswell Spencer for help. Marcus wasn’t someone who found it easy to get on with in the world in the first place but the Spencer Foundation agreed to fund Marcus’s research under the condition he leave the university and relocate to Spencer’s European estate. 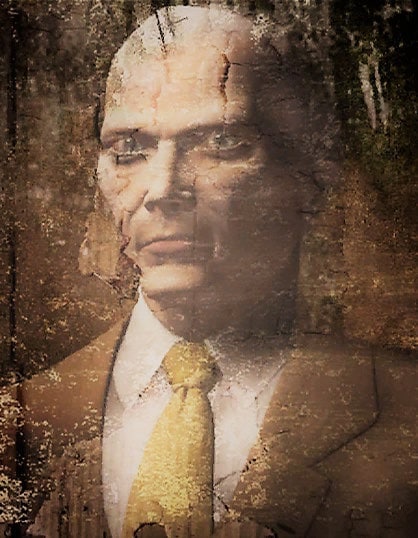 It was there that Marcus was introduced Spencer’s other great friend, Edward Ashford, and together the three shared common interests. Together they funded and planned an expedition to Africa in 1966 where they officially discovered the Progenitor Virus. Marcus believed the virus held the key to altering the DNA of a life form. He wanted to take it back and begin detailed investigations immediately. Together, the three scholars wanted to find the reasons why Progenitor failed to adapt to modern humans and desired to create a neutered strain that would allow them all to achieve immortality like the fabled kings of Ndipaya legend. This was the genesis behind the t-Virus Project.

In 1967, Marcus made the first breakthrough by running the virus through a repeat of the Stanley Miller experiment, the results of which only further reinforced his beliefs. However, as the years passed, the virus and how it should be handled caused a split in interest between Marcus and Spencer and a power struggle was born that would eventually claim the life of one of them. Marcus was so fascinated by the properties of the Progenitor Virus that he cared little about the impending formation of Umbrella and constantly performed experiment after experiment on the new virus. After Umbrella was established in April 1968, the turning point in his career came just a few months later. He and his up and coming apprentice, Brandon Bailey, had decided to return to Africa to gather up more Progenitor samples when at the last minute, Spencer suddenly requested that Marcus remain behind in Raccoon City to become Director of the new company Management Training Facility, due to be opened in August that year. Although Marcus initially had no interest in the job, he knew the opportunity would provide his own specialist facility, allowing him to continue his work on Progenitor away from the prying eyes of Spencer. Eventually, and with some reluctance, he agreed to the request.

Marcus spent the next nine years working on Progenitor, performing experiments on various types of insects, mammals and amphibians, and although Progenitor on its own was not capable of producing stable bio-organic weapons, his research laid the foundations for the very first t-type B.O.W.s. But as his work progressed he became frustrated and deemed it necessary that human test subjects needed to be introduced if his research was to go forward. But human experimentation was forbidden, despite Spencer having already secretly performed the first human Progenitor tests almost a decade earlier with the Trevor family.

In 1977, Marcus began to focus his research on the study of leeches. This was also the year Albert Wesker and William Birkin were enrolled at the Training Facility and Marcus immediately saw a potential in them that he had not seen in anyone else during his nine year tenure as Director.

Despite all this, the pivotal moment in the career of Dr. Marcus came in September 1977 when he successfully combined the Progenitor Virus with leech DNA to create the first successful strain of t-Virus. In the months following, Marcus began to use students from the school in his tests, at the same time becoming more and more isolated from staff and spending weeks at a time locked away in his private laboratory beneath the church. He perfected the t-Virus prototype in January 1978 but decided to keep his discovery a secret from Spencer and the other members of the executive board, confiding only in Brandon Bailey at the Africa lab via telegram. Ever since Edward Ashford’s death in July 1968, Marcus had suspected that Spencer had been looking for ways to gain total control of Umbrella and from that point on he had always been careful with his research, paranoid of any information leaks.

Despite his suspicions, Marcus knew that with the t-Virus, he held the power that could oust Spencer and his followers from the company for good. The only person Marcus ever fully confided in was Brandon Bailey; his student protégé and the man he hoped would one day be his successor. Bailey by this point was permanently stationed in Kijuju, running Umbrella Africa and regularly sending back Progenitor samples to Raccoon City.

However, despite all his calculating and careful planning, James Marcus made one fatal mistake which was his misguided trust of Albert Wesker and William Birkin. He had often noted in his diaries that that those two were the only ones he trusted following his forced separation from Bailey. Yet he failed to realise that Birkin and Wesker were spying on him and making regular reports back to Spencer at the Arklay Labs. Marcus also had no knowledge of Spencer’s grand plan for Wesker and that he was carefully nursing his development as part of the mysterious Wesker Children project.

By the time Marcus finally suspected something amiss after discovering security measures he’d laid to protect his work had been tampered with, it was already too late. The number of students mysteriously vanishing from the facility was rapidly becoming too large a number to cover up and he was now backed into a corner. He decided to postpone his plans to move against Spencer and instead officially announced the creation of the Tyrant Virus prototype to the board of directors. However, instead of the growing praise and promotion he expected, he was instead presented with damning reports proving he had conducted unauthorised human experimentation and deliberately withheld ground-breaking new research from the rest of the company. He was immediately stripped of all his authority and removed from power completely. Soon afterwards, the Executive Training Facility was closed down and all t-Virus research was transferred to the Arklay Labs under the supervision of Wesker and Birkin. Embittered, Marcus’ dreams of ousting Spencer was in tatters. He was exiled and left alone in his old lab at the now abandoned Training Facility, and little did he know that this entire sequence of events had been orchestrated by Spencer from the very beginning. Spencer knew all along that Marcus possessed the better scientific mind and had purposefully waited for his colleague’s research to bear fruit before he made his move to intercept it.

Throughout the 1980s, Marcus was forced to watch from a distance as the t-Virus came on leaps and bounds at Arklay. And in a further disgrace, William Birkin was even officially credited as the original developer of the t-Virus with Marcus stripped of all recognition completely. He spent the next few years in isolation, continuing work on his Queen Leech and swearing revenge. But with all his authority, tools, resources and finance taken away, he made no further
significant contributions to Umbrella. He had next to no authority in the corporation and it was now Spencer alone who held the real power. Marcus realised he had been so absorbed in his own research he failed to see what his colleague had been planning from the beginning.

When research on the t-Virus reached Level 3 in 1988 and set about creating a human biological weapon in the form of a Tyrant, Spencer formally took total control of Umbrella and had James Marcus killed to cover up any loose ends. Ironically the assassination was carried out by the very two men that Marcus had once trusted implicitly; Wesker and Birkin. Ten years after the closure of the Training Facility had buried the research on mutant leeches, the curtain on Dr. Marcus was finally brought down and his body rotted away in the waters of the gloomy research facility.

However, the Queen Leech held a certain ‘bond’ with the late Dr. Marcus, and sought out his decomposing corpse and nestled inside it, thus beginning an extraordinary process to pro-create a new life using the t-Virus within. The body of Marcus was completely absorbed by the leech and after ten years, a ‘copy’ of the late Doctor appeared at the Management Training Facility. This copy was neither a ghost nor a miraculous resurrection, but a clone created from the Queen due to permanently moulding itself to DNA from his remains. This copy even reflected the will of Marcus, and his desire for revenge on Spencer was carried over. The Queen began by infiltrating the Arklay Mansion undetected and releasing the mutant V-ACT strain of the t-Virus that created Crimson Heads. It then later infected the Management Training Facility and the Ecliptic Express with the original Prototype strain using the leeches. These incidents hammered the first nail into Umbrella’s coffin that would lead to their eventual downfall. But the Queen was confronted and destroyed by S.T.A.R.S. member Rebecca Chambers and former U.S. Marine Billy Coen.