Known as the Hero of Panemstan, Jason was a former US Army officer and leader of the Mad Dogs unit before shifting his role to become an Agent in the field. Jason would later attempt to expose Secretary Wilson in his role in testing US Army recruits with experimental versions of the T-Virus.

Jason’s background prior to his army days are unknown, but it can assumed he quickly rose through the ranks so that by 2000 was leading the Mad Dogs Unit in combat. 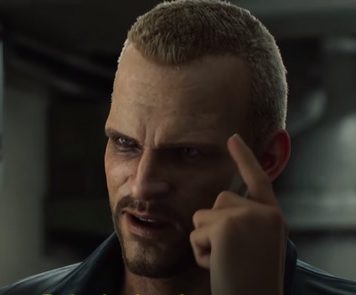 Mad Dogs were actively involved with the Panemstan Civil War as part of the US deployment to the area. During a mission, Jason and his Mad Dogs were returning to base when another helicopter was shot down by militants.

Jason disobeyed the order to return to base believing that there could be survivors to the incident. He landed in the combat zone and was able to locate a survivor called Jun See. As Jason looked to help him the group were confronted by Zombies. Shocked by this development the Mad Dogs with Jun fled to a building. Jun proclaimed that he needed an inhibitor as he had already been bitten by the monsters. Suddenly the hideout was under siege from Zombies with all members of the Mad Dogs being infected as a result.

Following this assault, the Mad Dogs were met by Shenmei who revealed she was the sister of Jun See and took his now fully zombiefied body to China. It was after this and Jason’s return to base that he and his unit were declared heroes much to admiration of the US public. Behind the scenes however, Wilson intervened and provided Jason and his unit with the antiretroviral medication that Jun See had alerted him to. Jason was now indebted to Wilson for the continued supply of this drug as without it he would mutate.

Over the next few years Jason left the army and became a US Agent, forming a partnership with Shenmei who had taken a similar path. The effects of the civil war however remained with him forever, regularly proclaiming that it was fear that would lead to terror. He intended to expose Wilson and his links to Tricell.

As the years passed, many of Jason’s former comrades became more and more embittered by their situation. In fact by 2006 only Jason remained with all others committing suicide to end their suffering. Enraged by this continued loss, Jason assisted Wilson in staging a biohazard outbreak in the White House itself.

Politically, the Panemstan Civil War was winding down with peace talks planned in the US with President Graham. Wilson and Tricell had been using the war as a test bed for combat data and for taking specimens for their “super soldier” initiative. Therefore, the end of the civil war and Graham’s plan to remove the US occupation was of great concern to him. As such, the outbreak in the White House was coordinated with a hacking attempt on data surrounding a potential biological laboratory in Shanghai, China. The blame naturally fell to the Chinese and Wilson was able to persuade Graham to maintain a presence whilst Jason, Shenmei and Leon S. Kennedy investigated further.

The three were therefore deployed to China using a submarine. Part 2 of Wilson’s plan was therefore enacted by Jason and a conspiring Shenmei – the release of Zombie Rats. The infestation quickly overwhelmed the staff but Leon was able to escape with Jason before the self-destruct system was activated. Again, from Graham’s point of view, this looked like another state attack by China.

Safely on the mainland, Jason decided to reveal to Leon his concerns and the part he played in trying to expose the US Government and their links to bioterrorism. Leon, not impressed looked to arrest Jason for his treason, however this ended up in a shootout where Jason was shot and left for dead.

After seemingly recovering from the gunshot, Jason tracked Leona and Shenmei to her family house. Enraged that Shenmei and he were not on the same page in showcasing to the world the fear and terror that he experienced, he proceeded to destroy the mansion before fleeing back to the United States to confront and expose Wilson once and for all.

Jason tracked Wilson back to the secret underground laboratory where his “super soldier” program was in full operation. As he did, it can be assumed that without a regular supply for the antiretroviral medication, the T-Virus that had resided in him for over 6 years was now able to spread freely. Although the exact reasoning is unknown, it can assumed that because the virus had been in his system for so long he had built up either a natural resistance to its more crippling effects or, his own physiological condition meant he was adaptable – Jason mutated into a Tyrant-like creature instead of a mere Zombie.

Ultimately Jason was defeated by Leon S. Kennedy and Claire Redfield. He was never able to reveal himself to the wider public and invoke the fear that he desired.