Javier was a South American drug lord in control of the Sacred Snakes crime syndicate who had taken de-facto control over a substantial area of jungle by the Amazon. He ruled the entire area absolutely and the small local government was unable to do anything about his control of the drug trade. The drugs the Sacred Snakes produced had been contaminating surrounding countries, as well as finding their way into America. Javier was amassing a fortune in drug money, building up his own private army, and fortifying his operations. He was a wanted criminal in many countries and also an uncommonly cruel man. The ability to slip through the fingers of justice and gather other criminals is not something an ordinary person could accomplish, but Javier had achieved his goals through the use of violence and strict control over the region. 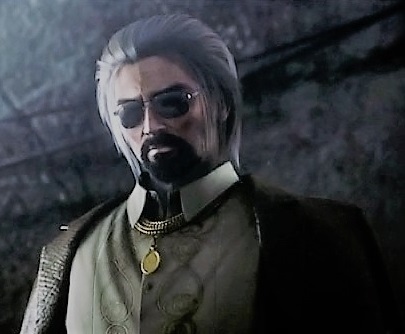 He rewarded those who submitted to him and brutally punished anyone who stood in his way, making harsh examples of anyone who opposed him. He ruled his dominion through fear for many years until he mysteriously disappeared from public view in early 2002. This led the U.S. Government to seek him out and investigate a possible link to Umbrella Corp.

Javier’s significant history dates back to his formative years where he learned about the drugs trade as a youth and soon completed his first drug deal when he was a teenager. By viciously and mercilessly murdering his enemies, he soon found himself a top a massive crime syndicate. In 1986 he and his wife Hilda gave birth to their daughter, Manuela. But not long afterwards, Hilda fell ill and was revealed to be suffering from a rare form of cancer isolated to the region of Amparo. For the next few years Javier searched desperately for a cure, eventually contacting Umbrella in 1991 following their reputation as the world’s leading pharmaceutical and medical enterprise. By using his fortune, he was able to attract interest from the illegal side of the company and put in touch with a researcher working under the supervision of the Ashford family. He agreed to purchase several samples of an experimental oncolytic strain of the t-Virus in a bid to cure Hilda’s illness.

Initially, the treatment seemed to work and Hilda’s cancer went into remission, although she failed to regain consciousness from her coma. A few months later his contact at Umbrella decided to raise the price for the viral samples and this enraged Javier immensely. He would not be made a fool of and he certainly wouldn’t be bribed. However, he was worried that if he stopped administering the virus to Hilda, her condition would worsen again. As an alternative he began to make other enquiries and heard whispers of the famed t-Veronica virus. However, he was told all research on Veronica was scrapped following the death of Alexia Ashford in 1983.

After losing patience with Hilda not waking up, Javier gave her more t-Virus until eventually she mutated into a horrible creature and lost her human form entirely. Yet rather than killing her, Javier kept her alive inside a special facility. He told Manuela that her mother had gone to paradise. In the following years, Javier expanded his empire using his vast wealth to construct a giant dam able to hold a capacity of 20 billion tonnes of water. This gained him support from the local populace as they could now enjoy an ample supply of electricity. It also raised the standard of living and financial support for the Sacred Snakes.
The dam also acted as a non-verbal threat to neighbouring communities. If anyone were to challenge his authority, he now had the power to cause a massive flood disaster. When one village challenged him, he caused an intentional water discharge ‘accident’ which resulted in the opposing village and its population of 80 people being wiped out completely.

In the years following Hilda’s death, Javier became unable to trust outsiders such as those at Umbrella and decided to try and craft his own biological weapons program. However, he had no skilled scientists or high-tech research facilities at his disposal meaning only primitive experimentation on human prisoners was his main source of data acquisition. The zombies he created were used as propagators of terror against hostile forces in the area, such as communist insurgents. But with his own B.O.W. project extremely limited, Javier turned once more to Umbrella and purchased several low-cost B.O.W.s such as the Plague Crawler and the Lurker. He also bought several specimens of a new B.O.W. dubbed Anubis, which was designed to be the successor to the now
discontinued Hunter Program.

In 2001, Manuela Hidalgo contracted the same fatal disease that had taken the life of his beloved Hilda, leaving Javier distraught. He contacted Umbrella again to make preparations about beginning a new course of treatment. Coincidentally however, Albert Wesker had turned his attentions to South America since the turn of the millennium and became aware of Javier and his dictatorship. After learning the Sacred Snakes were purchasing viral samples from Umbrella, Wesker made contact and Javier enquired about the t-Veronica virus he had first heard about ten years earlier. Wesker agreed to sell him a t-Veronica sample in exchange for a large sum of money and a significant slice of Javier’s business empire. Wesker also sold two new B.O.W.s from the rival company, including the Jabberwock S3; the first creature created solely with the t-Veronica virus.

After receiving assurances from Wesker that the virus would save his daughter, Javier decided he could combat the 15 year incubation period the virus required in a human by regularly transplanting his daughter’s organs. This resulted in the Sacred Snakes stepping up their interest in black market organ trafficking. Young girls began to disappear from their villages, and by early 2002 the vanishings had reached over 50 people. When Manuela’s illness was publicly announced, she was taken out of school from the local village of Mixcoatl and Javier disappeared completely from public view. This deeply alarmed the U.S. Government who had been following his actions closely from a distance. When further reports were received about a former Umbrella researcher entering Javier’s territory, the government put together an operation to apprehend him and Leon S. Kennedy and Jack Krauser were sent to Amparo to track him down. This former Umbrella researcher was the same individual Javier had dealt with years earlier in 1991 and a former associate of the Ashford family.
Upon arriving, they found Mixcoatl ravaged by the t-Virus and Manuela hiding out having fled from Javier’s mansion after she discovered the truth behind her treatment. She led the two agents back to Amparo and Javier’s domain. Javier made several attempts to lure his daughter back to his side but once it was clear she had turned against him for good, he let himself be consumed by the Veronica plant in his botanical garden. There he mutated and became the V-Complex. But thanks to Manuela’s flammable blood, Leon and Krauser were able to destroy him.