Jessica Sherawat was an extravagant, yet highly intelligent agent who originally worked for the Federal Bioterrorism Commission (F.B.C.), before transferring across to the Bioterrorism Security Assessment Alliance. However, it was later revealed that she was actually a triple-agent and spy working for Tricell all along.

Jessica’s distinctive wardrobe reflected her confident personality and left in no doubt her extroverted nature, although her thrill-seeking attitude often caused friction within the B.S.A.A. Blessed with beautiful good looks and an athletic body, she knew sex appeal would be a useful attribute in her line of work and believed that a certain amount of danger made a woman more attractive, explaining why she persisted in such behaviour. 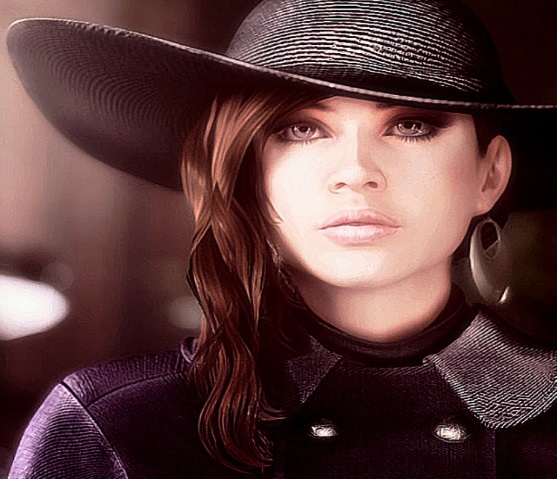 She was also extremely calculating and cunning. She often turned many a man’s head and used this to her advantage during many situations. Jessica was also a crack-shot and an expert sniper with her marksmanship skills ranking among the very best. She also excelled in logistical support and protection of equipment and assets.

Although her early career remains unclear, at some point Jessica was recruited into the F.B.C. under the command of Morgan Lansdale. She was deployed to the Mediterranean during the Terragrigia Panic of 2004 when the Italian terrorist group Il Veltro deliberately infected the mega float city with the t-Abyss Virus. Jessica was on site for the whole three week duration of the incident and for much of that time she fought alongside Parker Luciani. It is not known whether Jessica’s intentions were honourable at this point but she came across as being genuinely upset by the F.B.C.’s mishandling of the incident.

On the final day, Morgan Lansdale received approval from the European Security Force to deploy the Regia Solis Satellite to vaporise the area, essentially using the city’s own energy source to destroy it. The evacuation order was given and Jessica and Parker retreated back to the central tower the F.B.C. had been using as a base of operations throughout the conflict. By now the tower had been breached by Hunter B.O.W.s and as they fought their way through, they saved the life of an F.B.C. rookie named Raymond Vester. They arrived back at the command room in time to witness B.S.A.A. director Clive R. O’Brian clash with Lansdale over his decision to destroy Terragrigia, with O’Brian arguing they would lose crucial evidence about how the incident happened in the first place. Jessica found herself agreeing with O’Brian’s words although whether this was part of her deception is not known. It still remains unclear when exactly Jessica became a double agent or whether she was a double agent all along.

Eventually, she and Parker battled to the roof of the tower and were evacuated by helicopter only minutes before the city was destroyed. Jessica showed remorse and lamented that they came to help the people of Terragrigia, but ended up doing nothing. But her sorrow may easily have been faked for Parker’s benefit.

In the aftermath, the F.B.C. was heavily criticised for its handling of the incident and many agents left their ranks and defected to the B.S.A.A., Parker included. But by now Jessica was Morgan’s protégé and he often referred to her as his ‘bright, young assistant.’ His faith and trust in her was reciprocated with Jessica enjoying the extra power and benefits that came with being the F.B.C. Commissioner’s personal agent. Soon afterwards, Lansdale’s next request was for her to infiltrate the B.S.A.A. as his mole so he could be made aware of all of Clive O’Brian’s actions. Jessica accepted the order and resigned from her F.B.C. position, transferring across to the B.S.A.A. to be reunited with Parker. There she caught the eye of many men, Quint Cetcham in particular. He even tried to follow her home once but she expertly gave him the slip before he could discover her address.

By 2005, Jessica worked with Chris Redfield and often took to outrageously flirting with him in a bid to get him under her spell, but Chris seemed immune to her charms. As well reporting back to Lansdale, Jessica also kept in regular contact with Excella Gionne. Her Tricell research team had co-created the t-Abyss Virus alongside a private team supplied by Lansdale. But now the virus was complete, Lansdale had kept it for himself and Tricell were unhappy at this betrayal. Excella ordered Jessica to steal a t-Abyss sample and would work alongside Raymond Vester to achieve this objective.

Another Tricell spy, Vester was still an F.B.C. agent at this point and they endeavoured to use each other to manipulate both the F.B.C. and the B.S.A.A. But although they both had the same objective, they worked separately and there was an internal source of conflict between them. Raymond Vester knew Morgan Lansdale was responsible for the Terragrigia Panic that killed thousands and wanted him exposed and brought to justice.

This was why he colluded with Clive O’Brian and concocted the whole Veltro revival act. Bringing Lansdale down was his personal primary objective and the t-Abyss sample for Tricell a distant second. Jessica on the other hand was content in her role as Lansdale’s spy, enjoying the comforts and luxury it afforded given the F.B.C.’s vast resources and ever-expanding web of power. She decided she would acquire the t-Abyss sample but at the same time protect Lansdale, ensuring she could continue to carry out her dual role working for both organisations. These opposing views over Lansdale ensured there was a high-chance Jessica and Raymond would come to blows should any aspect of their mission be put in jeopardy.

The B.S.A.A. soon received intelligence that Veltro, the terrorists responsible for the Terragrigia panic and who Lansdale collaborated with, were possibly staging a comeback. This was actually an elaborate hoax by Vester and O’Brian to try and trick Lansdale into making a panicked move. Jessica saw this as the perfect opportunity to recover a t-Abyss sample for Tricell. By now she was Chris Redfield’s new partner and had developed something of a crush on him. She was determined to manipulate him using her charm and beautiful looks to help achieve her goal. Just prior to the mission, Jessica was interviewed by Excella Gionne who was acting out her role as an officer of the Global Pharmaceutical Consortium. Jessica gave frank opinions on her work colleagues and a detailed breakdown of what she knew about the t-Abyss virus thanks to her experiences in Terragrigia a year earlier.

When the mission began, Jessica was sent to the mountains of Finland alongside Chris to investigate a lead on a potential Veltro base. On route they witnessed a plane crash originally transporting B.O.W.s. that had left a nearby airport in a panic. During their investigation Jessica constantly questioned Chris about his relationship with former partner Jill Valentine, but he was always evasive with his answers. However she did coax Chris into admitting he trusted her implicitly.

After they reached the base and confirmed the location as Valkoinnen Mokki Airport, they were informed by O’Brian that the B.S.A.A. had lost contact with Jill and Parker on the Queen Zenobia, somewhere on the Mediterranean Sea. Chris and Jessica immediately boarded a helicopter to carry out search and rescue, though locating the ship without a fixed position was like searching for a needle in a haystack and took several hours.

Eventually, good work by their colleagues Keith Lumley and Quint Cetcham led to Chris and Jessica being sent the coordinates for what they believed was the Queen Zenobia. However, when they arrived they found that the ship was in fact its sister vessel Queen Semeramis, which was also infected bythe virus. Under secret orders from Lansdale, Jessica wired the Semeramis to explode, therefore destroying any evidence within that could tie the F.B.C. Commissioner back to Veltro. Eventually, Chris and Jessica located the Zenobia after Parker and Jill reactivated the ship’s transponder. Once on board, they all met up in the casino where Vester, still playing the part of Veltro at this point, was about to reveal the whole truth about Terragrigia to Jill and Parker and of Lansdale’s role in masterminding the whole event. Because of this, Jessica panicked and quickly improvised by shooting Vester, knowing he would be wearing body armour.

Vester fell and was forced to play dead, but when Parker unmasked him, he knew he had to speak up about Jessica otherwise everyone would have believed him to be a real Veltro agent. He knew she was trying to shift the blame away from Lansdale and so he whispered to Parker that she was Morgan’s spy before faking his death. Vester’s plan worked and Parker later confronted Jessica on the bridge as she was about to activate the ship’s self-destruct system to destroy all the evidence. Vester appeared alongside Parker, revealing the truth and exposing her position to stop her from ruining his personal goal of exposing Lansdale.

Angry, Jessica shot at him again, but this time Parker was hit in the leg. She activated the self-destruct and ran off. Vester pretended to chase her but instead let her go. He had already earlier acquired a t-Abyss sample so their mission for Tricell was a success. But in the end, Jessica’s efforts to save Lansdale were all for nothing as Chris and Jill Valentine eventually located the sunken Queen Dido and met Jack Norman, uncovering hard proof that Lansdale had provided Veltro with the t-Abyss virus and relevant equipment to carry out the Terragrigia Panic. He was later arrested and Jessica was forced to abandon her role as his spy.

Following the incident, Jessica and Vester met up in a cafe at an undisclosed location where Jessica was reading Dante’s Inferno. Because Vester had achieved his goal in bringing Lansdale down he no longer bore any malice against Jessica and was happy for her to take the credit with Tricell. He handed over the t-Abyss sample he’d recovered for her to deliver it to Excella Gionne and Tricell. Although Jessica enjoyed being Morgan’s spy, she was still a professional and was happy to leave him behind and move onto her next alliance. Her current whereabouts remain unknown.