Karl Heisenberg was an enigmatic individual and descended from European nobility. He along with Salvadore Moreau, Alcina Dimitrescu and Donna Benviento were all administrated with the Cadou parasite – in this case against his will as a child and thereafter served Miranda to assist her with her desire to resurrect daughter, Eva.

Heisenberg himself was a genius when it came to engineering. He saw the benefits mechanical enhancements could have on humanity and using his new found strength and attributes used his factory on the outskirts of The Village to conduct experiments to that effect. 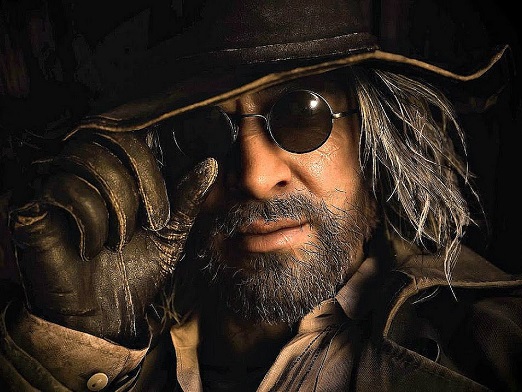 Like the other Lords, Heisenberg reacted favourably to Mold infection. His brain affinity to the Cadou was judged as being high and as such he retained much of his humanity – at least in appearance. Internally at least his reaction exhibited alarming and unique traits that saw him gain quite extraordinary powers over metal and metallic objects. His Cadou interacted with his internal organs and in doing so created a magnetic like solenoid that amplified the naturally low electro-magnetism that all humans possess. This mutation therefore meant that Heisenberg as an individual had a degree of control over nearby metals and could bend and twist them to his desire. He acted as a magnet with a side effect being that usually heavy items like an axe was now easier for him to maintain and carry – something he opted to do presumably as an outward sign of his increased strength.

Unlike the other Lords however, Heisenberg had not real desire to please Miranda. Quite the opposite. He was extremely frustrated at being trapped by her and her bidding to what he considered to be a fairly unimportant task with Eva. He had plans to overthrow Miranda and be rid of her dictatorship but was fully aware of his own powers paled next to hers. Heisenberg therefore constructed a plan.

Firstly, like the other Lords he was given the Cadou parasite to experiment on as he deemed necessary with the understanding that it would be used to locate a suitable vessel for the ceremony to resurrect Eva. Heisenberg took this opportunity to experiment on the Cadou with dead test subjects to firstly test the ability of the Mold to bring dead subjects back to life, to test out his own cybernetic enhancements and to test out their ability to heed commands. The net effect of these experiments was that in doing so, he would create an army that in theory would be loyal to his commands and could take down Miranda as well. This was the essence of the Soldat Program whereby Heisenberg was able to create many mutants including the Hauler, Soldat and its variations and a particularly aggressive B.O.W called Sturm. Records of his experiments were kept in voice recordings and diary logs.

After Miranda had successfully captured Rosemary and initiated her plans for the resurrection of Eva, Heisenberg took the opportunity to speed up his own plans. At some point he contacted the B.S.A.A who began their own investigations into Miranda’s activities. He also encountered Ethan Winters the biological father to Rosemary sculling about the Castle Dimitrescu entrance. Sensing that Miranda would be interested in this development, he took Ethan to the Church for a meeting with the other Lords. Here Heisenberg submitted to Miranda that he should be the one to play with and kill Ethan. Miranda agreed Ethan was released to him. Heisenberg kicked Ethan into a mine where he was subjected to chasing Lycans and even Urias. Ethan evaded them all and even Heisenberg’s final trap of an oversized meat grinder failed to dispose of Ethan. In escaping, he fled into Castle Dimitrescu and the auspices of Alcina Dimitrescu.

Ethan continued to show his potential and was able to dispose of Dimitrescu, Beneviento and Moreau thereafter whilst also collecting the flasks in which his daughter had been split into. At some point Heisenberg correctly theorised that Miranda was now toying with the Lords and wanted them all dead now that she had obtained the vessel for her experiment. Angered further by this apparent betrayal, Heisenberg turned his attention to Ethan himself and questioned whether he would make a powerful ally in his own quest to remove Miranda.

Heisenberg therefore sought to test Ethan once more and led him to the Lycan Stronghold before meeting with him face to face in his factory. During this meeting Heisenberg informed Ethan of his plans and their mutual dislike of Miranda. Heisenberg believed that the power from Rose was sufficient to bring down his master and wanted Ethan to join his alliance. When Ethan declined, he was thrown into the factory where he would encounter Heisenberg’s monstrous creations.

Ethan successfully navigated the obstacles in place and was looking to leave when Heisenberg confronted him once more. Enraged that Ethan had survived and conditioned to oppose his plans, Heisenberg seemingly triggered a massive mutation of his bodily structure. Already encased in a metallic exosuit, the Cadou bonded with the machine parts creating a strange machine-monster hybrid. More information here.

Ultimately, with the combined efforts of Chris Redfield and Ethan, Heisenberg was defeated and killed in the grounds of his own factory.