Keith Lumley was an original B.S.A.A. agent working under the command of Clive R. O’Brian when it first formed in 2004. He became known amongst his colleagues as ‘Grinder’ due to his liberal attitude to dating and confident personality, a moniker he would later adopt as his call sign. Although Keith could usually be found in the company of various women whilst off duty, his multiple honourable deeds as part of an elite mercenary unit earned him a place in the B.S.A.A. He was usually partnered with Quint Cetcham on field missions and the two would often have arguments on a daily basis due to their opposing personalities. Keith would playfully tease Quint about his geeky inclinations and lack of confidence with the opposite sex, commenting so often it became almost a tradition for him. 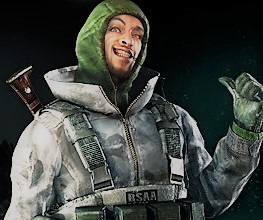 Despite this playfulness, Keith trusted Quint with his life and had the upmost respect for his technical skills. Although he often joked that Quint would prefer a new computer rather than a girlfriend, he knew there was no one better when it came to hacking into secure systems. Keith had a very positive outlook on life and was confident in his own abilities. He was blessed with superb hand to hand combat skills, honed through years of training and was proficient with two double-edged kukri combat knives he favoured in close combat.

In 2005, Keith was part of the B.S.A.A. investigation looking into the possible revival of the Il Veltro terrorist group. Alongside Quint, Keith was dispatched to a mountain range in Finland and came upon the crash site of the plane that had taken off in a hurry from Valkoinnen Mokki Airport. They liaised with the team securing the airport and became the first agents to penetrate inside. There they met with heavy resistance in the form of Farafello Hunters and packs of Fenrir. Whilst Quint tried hacking into the computer systems for information, Keith used his superior combat skills to keep them both safe. Eventually, Keith held off the B.O.W.s long enough for Quint to get a message through to O’Brian that he had uncovered his fake Veltro revival plan and the F.B.C.’s involvement. Although the whole airport was later firebombed, Keith and Quint survived the explosion and were safely evacuated from the site.

Following the incident, the B.S.A.A. were restructured and reformed under the jurisdiction of the United Nations. Keith accepted a position with the East African branch and left his former colleagues behind to embark on a new adventure.