Kenneth was the oldest member of S.T.A.R.S and highly intelligent. He attended university and gained a doctoral degree in science, using the periodic table to create numerous chemicals that specialised in countermeasures and defence.

Much of his background revolved around chemistry to and he also had a PH.D in the subject, yet behind the brains and advanced age was a man who possessed reconnaissance skills and position security not inferior to Chris Redfield in his role as Point Man; the most dangerous role on the team. He was also very athletic and he excelled at using knives. His investigation skills surpassed those of Bravo Team Captain Enrico Marini. Outside of work, his hobbies included landscape gardening and dog training. 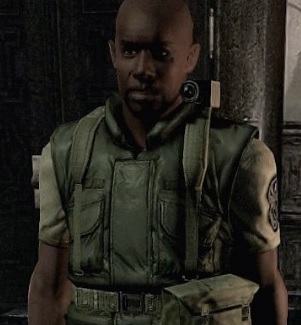 After he joined S.T.A.R.S., Kenneth was somewhat of a gentle giant and very quiet and reserved. He initially wondered whether his chemistry expertise would really be required for such an occupation in law enforcement, but these fears were soon put to rest when he learned it was Captain Wesker himself who personally sought him out for the S.T.A.R.S. team. This confidence boost brought Kenneth out of his shell and he warmed to the other members. He also often remarked he enjoyed the quiet ‘Midwestern lifestyle’ since moving to Raccoon City.

In addition to his chemistry and field work skills, he was also talented in field scouting and investigation. Enrico often tipped his hat to Kenneth’s wealth of investigative experience. He also had a reputation as a perfectionist. For the more confrontational S.T.A.R.S. missions, Kenneth was always charged with recon and position security. For field missions, he was usually the designated member to wear the shoulder-mounted bodycam for Bravo Team, with Joseph Frost likewise for Alpha.

Kenneth was part of the Bravo Team during the ill-fated mansion incident of July 1998. After Bravo Team’s helicopter crashed in the woods, he joined in the search of the surrounding area to look for escaped prisoner, Billy Coen. However, he became separated from Enrico and eventually he along with Forest Speyer and Richard Aiken became the first S.T.A.R.S. members to arrive at the Arklay mansion. After splitting up to look around, Kenneth wandered for hours around the secluded estate looking for his missing comrades and trying to stay alive. Unfortunately, he was ambushed by a zombie in the first floor west wing corridor next to the Tea Room and was killed just moments after the arrival of Alpha Team.

His body was later found by members of Alpha and the DV tape from his shoulder cam captured his final moments, showing Kenneth being unusually sloppy with his gun due to tiredness when facing down the zombie. From the moment he touched down on Raccoon Forest to the time of his death he had been operational for over 24 hours with no provisions or rest.