Kevin was an officer of the Raccoon City Police Department. He was gifted with superior athletic abilities and was an outstanding pistol shot, often winning shooting competitions within the force.

He was a good fellow all round and well-liked by his colleagues. He was also known for being a dyed-in-the-wool optimist who never dwelled on the small things in life. Despite being an excellent police officer, Kevin had aspirations to better himself by joining the Raccoon S.T.A.R.S. but he never made it and failed the selection process twice.

Those close to him believed his happy-go-lucky, blissful personality was his downfall and he was too laid back about the whole affair. When he knocked off duty, Kevin was a regular at J’s Bar in the centre of town. He had a tab there and a discarded credit slip later picked up by a customer suggested that he certainly enjoyed a beer or two, judging by the outstanding bill he’d racked up. 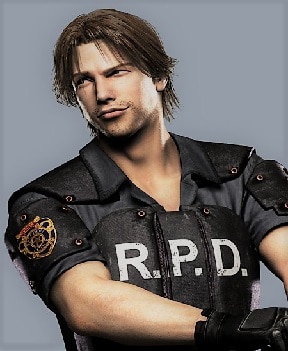 His passion for a beer would sometimes get him into trouble and despite his occupation as a law enforcement officer, he was not afraid to get his hands dirty if he’d had one too many. The amount of drunken fracas he got himself into resulted in the bar’s owner, Jack, putting his name down on a troublesome persons list which could have resulted in him being banned from the bar if he caused trouble again. When at J’s he also liked to play darts but many of the regulars would tell you that he often got thrashed miserably. His playing skills were no apparent match for his big enthusiasm for the game. As well as darts, he also had a passion for football and was a smoker.

Kevin also had a thing for cars and would often take overnight trips to random places just so he could sleep in his car. He also collected memorabilia such as highly detailed mini toy cars and famous brand steering wheels. He was also quite vain and took great pride in his appearance. Kevin worked from the Eastern Office of the R.P.D. where his desk was located and his favourite weapon was a Desert Eagle Magnum which he kept locked in his desk drawer. He worked in the same office as Jean, suggesting that they both covered the same area whilst out patrolling. His locker was located in the Night Watchman’s room near the stairs leading down to the basement level of the precinct house. This suggested that he wasn’t adverse to working nights and likely worked closely with the main watchman, George Scott.

By late September 1998 when the outbreak in Raccoon City was becoming citywide, Kevin, who was off-duty at the time though in typical fashion hadn’t bothered to change out of his uniform, was in J’s Bar enjoying a quiet beer alone. He had a paper in his pocket containing S.T.A.R.S. interview tips, although the Raccoon unit had by this time been recently disbanded. Only Brad Vickers remained on active duty and was awaiting reassignment. Over the next few days, he was due to work with Rita and Marvin Branagh to train the batch of new recruits that had been assigned to the city, one of which being Leon S. Kennedy. Kevin had briefly met him once when Leon and the other recruits came to the R.P.D. to meet their superior officers and have a look round the place.
Kevin was watching a news report about a riot that had broken out at a football game earlier that afternoon when J’s Bar was suddenly besieged by zombies. Along with several other survivors, Kevin escaped up onto the roof where they crossed over to a vacant apartment block and made it back down to street level. There he met up with Deputy Police Chief Raymond Douglas. As Douglas tried to secure their escape, Kevin assisted in using the police cars to create a barricade to slow the zombies down. After fighting through town, he eventually made it to the main square and assisted in detonating a large set of planted explosives, blowing up an entire army of zombies. He then caught a lift back to the police station.

A few days later, Kevin was one of only a handful of R.P.D. officers left alive after the outbreak had spiralled completely out of control. There they all came up with an escape plan and he assisted in securing the front gate of the police station until help arrived. Eventually a van arrived and Kevin, Rita, Harry and a few others managed to make it out of there. As well as these two confirmed incidents, Kevin was involved in happenings at several other locations throughout Raccoon City. He managed to escape the city just moments before the missile hit. Following the incident, Kevin moved to Florida where he took a new job in Miami.