Kirk Mathison was a helicopter pilot for the Bioterrorism Security Assessment Alliance. Unusually for a B.S.A.A. front-line operative, he was recruited with no prior military experience and underwent a strict training program to improve his piloting qualifications. He learned all his skills and techniques from within the organisation, making him a unique and ‘genuine’ member.

He was a cheerful man and well-liked by his colleagues. In 2005, Kirk was part of the B.S.A.A. search and rescue operation sent to recover field agents stranded on the Queen Zenobia on the Mediterranean Sea. His call sign
for this mission was ‘Hatrick’. 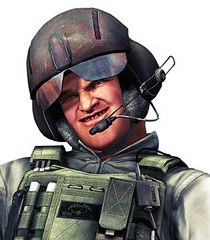 Whilst waiting to evacuate Chris Redfield and Jill Valentine from the foredeck, they were attacked by a mutated whale infected with an escaped Malacoda parasite. Whilst hovering at a safe distance, Kirk dropped down several rocket launchers to aid the agents. Once the whale was incapacitated, he was able to extract Chris and Jill just moments before the ship sank. He wanted to immediately evacuate but agreed with Chris’ assessment that they couldn’t let this
creature roam free and infect other ocean wildlife.

Kirk skilfully maneuvered the helicopter around the pulsating tentacles as Chris and Jill finished the whale off with explosive rockets and heavy weaponry. Kirk later dropped them both off at the site of the sunken Queen Dido so they could look into the remnants of Il Veltro. Later that year when the B.S.A.A. was restructured and reformed under the United Nations, Kirk was seconded to the West African branch and soon joined the Special Operations Unit Air Platoon.
In 2009, Kirk was on duty during the B.S.A.A. operation to arrest Ricardo Irving in Kijuju. He oversaw Captain DeChant’s Alpha Team infiltrate the K.A.Z and later dropped back to rescue Chris Redfield and Sheva Alomar’s Bravo Team by firing a rocket to destroy a gate blocking them in the town square besieged with Majini. He assisted Bravo Team several times and relayed orders from headquarters before his helicopter was eventually brought down by a swarm of Kipepeo B.O.W.s. The chopper exploded and a burning Kirk was thrown from the wreckage and impaled on a spike.