The Kodoku Virus (unofficial name) was a research venture  initiated by Alex Wesker following her migration to Sonido De Tortuga Island with orders and resources provided by Oswell E. Spencer to create a virus that would grant immortality to those who used it. This was an extension of the now defunct t-Virus project to create what was essentially a neutered variant of Progenitor which would be adaptable to modern humans. Wesker was provided with numerous resources including thousands of test subjects and top of the line equipment and funding. But due to her feigned loyalty to her former master, Alex instead focused her resources on developing an experimental virus with the hope of creating the perfect B.O.W., something with unmatched combat abilities and intelligence levels to allow for complete control and versatility. 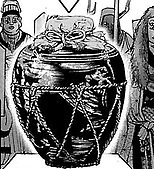 In researching methods for the proposed immortality concept, she became influenced by Charles Darwin’s concept of ‘natural selection’ and the biological concept of fitness described as reproductive success and the preservation of favoured races in the struggle for life. This provided the template to use the experimental virus on creatures only to pit themselves against each other in combat in a confined environment. The ultimate survivor would have a sample of its blood taken and then recombined ready for the next round of trials which would be repeated over and over again until only one subject remained. This process was similar to how the Hypnos Gene was developed by Dr. Klein in 1998 during development of the Hypnos T-Type Tyrant on Sheena Island.

The project was named Kodoku after a type of poisonous magic found in Japanese folklore. To create Kodoku, sorcerers would mix several insects in a jar, and let them kill one another until only one survived. The fluids of the insect that survived would be used to poison an individual with a curse that would control them, cause them misfortune, or kill them. The remaining insect could also be used as a sort of “luck charm” granting the one who performed the ritual great wealth. In return the owner is supposed to feed the bug. Neglecting to do so would enrage the insect. If the owner did not equivalently repay the insect by placing all his or her riches beside a road, plus interest in gold and silver, the insect would devour the home owner. Therefore, this ritual could also be used as a death curse by giving the riches to an ignorant individual.

Alex Wesker used Tortuga Island as a testing ground for the Kodoku Project and worked closely with a researcher named Dirk Miller. But instead of putting insects, snakes and small animals into a jar and letting them fight it out, Wesker used her experimental virus to create primitive B.O.W.s using the test subjects provided by Spencer and then had them fight each other under various controlled conditions. After each trial, the recombinant strain would be extracted from the victor and injected into the next batch of subjects. These trials would continue until only one test subject remained out of the 1000s that originally began. Once the lone survivor was acquired, she could make the most powerful virus from its blood and the ultimate B.O.W. would be born based on Survival of the Fittest doctrines.

Wesker worked on the project for over a year until she suddenly abandoned the project as part of a pre-planned betrayal of Oswell Spencer. In 2006, she left Tortuga and relocated to her new empire on Sushestvovanie Island on the Baltic Sea, a place she and her trusted associates had been building ties on since 2000 by revitalising industry and winning the trust and support of the locals. This was a place she could continue her work away from the prying eyes of Spencer. To cover up her disappearance from Tortuga, she applied the Kodoku principle not just to the B.O.W.s, but also to the research staff to weed out those unworthy. Throughout the trials Dirk Miller emerged as the only survivor and therefore won the complete trust of Alex and became guardian the experimental virus they had developed. He then took sole charge and became the consummator of the Kodoku Project.

He reported Alex’s betrayal back to Spencer but as instructed, did not elaborate on why and where she went. But with Wesker gone and Spencer’s resources used, Miller was forced to improvise to gather new test subjects and began to locally source his materials and manipulated the superstitious natives of the island by disguising himself as a Shaman. He was able to recruit followers and used them to capture innocent villagers. He produced more B.O.W.s by injecting the human natives with the special virus and thus the Kodoku trials began again.

One such subject chosen was a villager named Lopez. He was given the virus and was horribly mutated, undergoing surgery that saw him grafted with two extra arms and mechanical propellers. He became known as ‘Subject 228546’ or the Schraube Damon. Another promising subject was Marilou Mabou’s former brother, Eliseo, who demonstrated tenacity and intellect. This B.O.W. was designated ‘Subject 001193’ and was programmed to target the most powerful fighters. The trials expanded outside of the research area and instead of a jar like the original curse, the whole of Tortuga Island became the Kodoku Pot.

The Kodoku Plan continued in secret for the next eight years. Miller created superior B.O.W.s with heightened strength and combat abilities and imprinted key words to retain an element of control and an instinct to remain on the island and not let others leave. As expected, rumours of black magic and curses from the Shaman kept people away from Tortuga Island and the program continued unperturbed. But the project was not without its hardships. Because Miller was on his own without Wesker and the other researchers, he failed to retain control of the experimental bodies and many subjects escaped. As a consequence of its foundation, the Kodoku Virus was able to retain higher levels of intelligence compared to previous t-variants and this meant memories of their time as humans periodically resurfaced in some test subjects. This was the case with Subject 001193 who fled to the caves and began capturing natives and infecting them, intending to reclaim his time as a human by setting up his own village community. Additionally many agents from opposing organisations would often come to the island searching for Umbrella’s hidden legacy.

By 2014, only two subjects remained as part of the Kodoku Plan and both became entangled in a TerraSave investigation of the island and an audacious plot by Shen-Ya Pharmaceuticals to steal the Kodoku Virus. During the final battle, Subject 001193 Moiro defeated the Schraube Damon and was confirmed as the last surviving specimen of the Kodoku Project. Shen-Ya agent Zǐlì used Dirk Miller’s S-class security rating to initiate the final experiment. This isolated Subject 001193 and extracted the latest strain from its bloodstream. This virus was the ultimate result of the Kodoku Plan. Zǐlì planned to return the virus sample to Sheng-Ya Pharmaceutical for further research but she was ultimately fatally wounded and chose to use the virus on herself instead, transforming into a hideous creature. The main trait of the virus was it ability to limit necrosis to the cerebral cortex which enabled B.O.W.s to be programmed to follow more commands, retain memories of their former lives and establish a system of control never before seen in t-Virus subjects. It also contained a genetic mix of superior DNA taken from all promising subjects in the Kodoku trials. For the first time zombies could carry out somewhat complex tasks and even attempt primitive communication. Zǐlì estimated even just a single drop of the completed virus would be worth tens of millions of dollars.