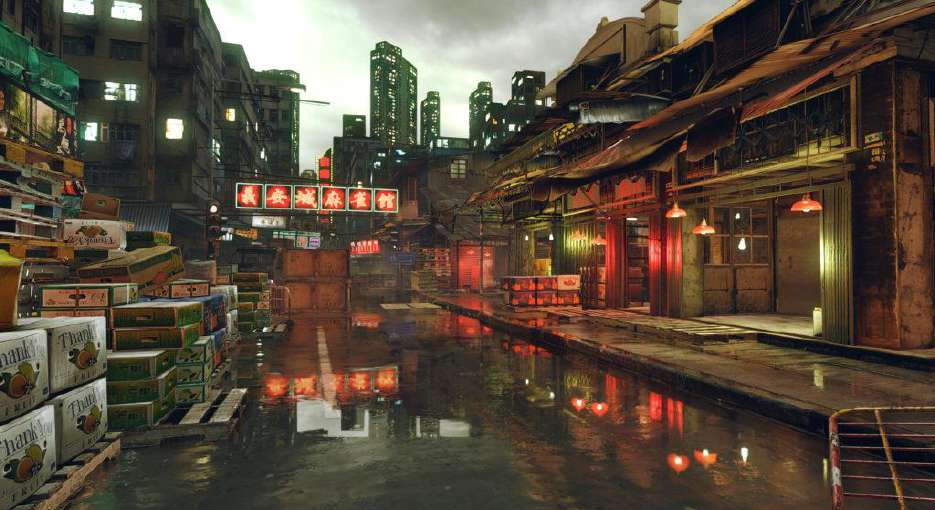 A coastal city in China, Lanshiang features a large bay and extensive transport infrastructure that includes rail, buses, and freeways. The high-rise Tatchi quarter, which includes the Quad Tower, stands in stark contrast to the labyrinthine slums of Poisawan in Waiyip, a fallout of the British colonialism of the first half of the 1900s when the ousted Qing government sought refuge in the lawless area. The influx of refugees resulted in the construction of multiple barracks in an attempt to stabilize the region. Its current population is unknown, but it is amongst one of the largest cities in the world. There are many unregistered residents and the city suffers from overpopulation.

WAIYIP: This is the main sub-region of Lanshiang, covering a large percentage of the city. Waiyip is divided into many districts, including Poisawan, Koocheng and Yuenmon. Poisawan is a huge slum constructed in the ruins of a fort. In the early twentieth century, the area was a base of operations for British colonialism. The Emperor of China was able to rally the surrounding peoples to extirpate the British from their land. Following British abandonment, the areas of Poisawan lapsed into a lawless zone. With no one in control, people started building dwellings haphazardly, until they piled up into the current labyrinthine mess the district is today.

Koocheng is a riverside district and includes major residential areas as well as shipping yards and the Kwun Lung building where Simmons and The Family based themselves. Yuenmon is a coastal district by the sea and contains the military port and naval shipyards. The Air Craft Carriers utilised by Neo-Umbrella were docked here. Other notable locations in Waiyip include the tenement building where U.N staff were taken hostage and the Vinci Medical Research Centre.

TATCHI: This is the second major sub-region of Lanshiang, and represents the central business district. Many luxurious skyscrapers are situated here and amenities include shops, restaurants and offices. It is situated north of the Kwanwing River and contains districts including Kaumon and Poklam. The most notable location inside Tatchi is the Neo-Umbrella Quad Tower, which is amongst the tallest buildings in the entire city. During the 2013 terrorist attacks, Tatchi was kept free from the J’avo attack, lulling the citizens and authorities into a false sense of security and leading many civilians to be evacuated there. But this was a ruse to cram Tatchi with as many people as possible before launching a C-Virus missile into its heart and ensuring maximum casualties.