Laura Bierce was an American supermodel and known throughout the industry as the ‘Jewel of Hollywood.’ She was extremely beautiful and one of the favourites for the Idol Survival competition; a reality TV show which saw swimwear models and gravure idols competing in a series of survival games across a deserted island. Laura presented herself as self-assured and strong-willed. Although friendly on the surface, she had a tough exterior and did not like asking people for help. However, when put in pressurised situations, she revealed her tough persona was all just an act and in reality she could get scared very easily.

In 2014 she was part of Idol Survival on Sonido de Tortuga Island and was fascinated when she was part of a scouting group who visited Ague Village and witnessed a voodoo ritual performed by the mysterious Shaman. When Assistant Director Takeru Tominaga later claimed he had seen a real life zombie wandering the jungle, Laura dismissed the sighting as his mind playing tricks because of the Shaman’s ritual. 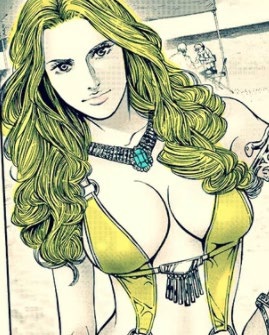 But the next day when the survival games started, Laura witnessed her cameraman being attacked by a zombie and when she made it back to base camp, most of the production crew had become infected. Laura managed to escape and made it back to the White Castle ship with survival expert Brown Anderson and comedian ‘Crazy Alexander.’ There Laura proved herself as extremely brave and capable.

She was able to expertly wield a shotgun when the zombies attacked the ship and demonstrated impressive diving skills by jumping off the main roof to escape. Brown Anderson was injured in the attack so Laura dragged his unconscious form back to shore and administered mouth to mouth CPR before he came round. Unfortunately Brown had been infected by the virus and this transmission of bodily fluids also infected Laura.

Brown and Laura later met up with Tominaga, Yuki Mayu and Zǐlì, and built a small camp laced with traps to protect themselves from the zombies. But when Laura and Brown were on watch, Brown became a zombie and attacked her. She managed to get away from him and he was later killed in a struggle with Tominaga.

Laura and her group were later chased by Subject 001193; one of two fearsome B.O.W.s left behind from the Kodoku experiment and they arrived at the abandoned military base and were saved by the B.S.A.A. From there they entered Umbrella’s hidden base where researchers Alex Wesker and Dirk Miller had performed all manner of inhumane experiments. It was there that Laura realised she was infected and she deliberately ran away so she would not attack her friends. She later returned and even saved the lives of her former colleagues when she got the drop on Zǐlì and attacked her as she held her friends hostage. Both Laura and Zǐlì plummeted down a deep pit and Laura was washed down a sewer drain. Even following the conclusion of the Sonido de Tortuga Island incident, Laura still remained on the island wandering aimlessly as a zombie until she was presumably found and eliminated by the clean-up crews.