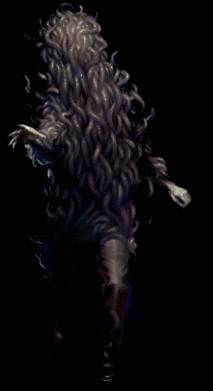 The Leech Man is the result of literally hundreds of leeches attaching themselves to a human body or corpse and working together to take full control of the primary motor functions. It is believed this was done to help the leeches become more mobile and agile in their relentless quest to find blood, which was their only form of sustenance. This strange being must not be confused with the Mimicry Marcus, as those were created via a different species of genetically modified leech that had been enhanced and developed intelligence levels to the extent they could swarm together and take a humanoid shape. The Leeches that make up the Leech Man were unable to do this and it was a simple irregular mutant.

The Leeches sucked the host body dry of blood and they solely controlled the body meaning it could no longer function on its own. It was extremely agile and used the ventilation system of the hospital to move around. The creature had limited intelligence and would ignore cornered prey if a fresh source of blood was available such as a blood pack or wet bloodstain on the floor. Likewise any person with open wounds was much more at risk than anyone healthy. The leech swarm that covered the cadaver it controlled also acted as a protective shield which was extremely hard to penetrate. Gunfire was almost ineffective and this was down to the thick bodily secretions the leeches produced. But the Leech Man was vulnerable to high heat and any exposure would cause the leeches to lose their grip on the host body and collapse,and they would expire shortly afterwards.