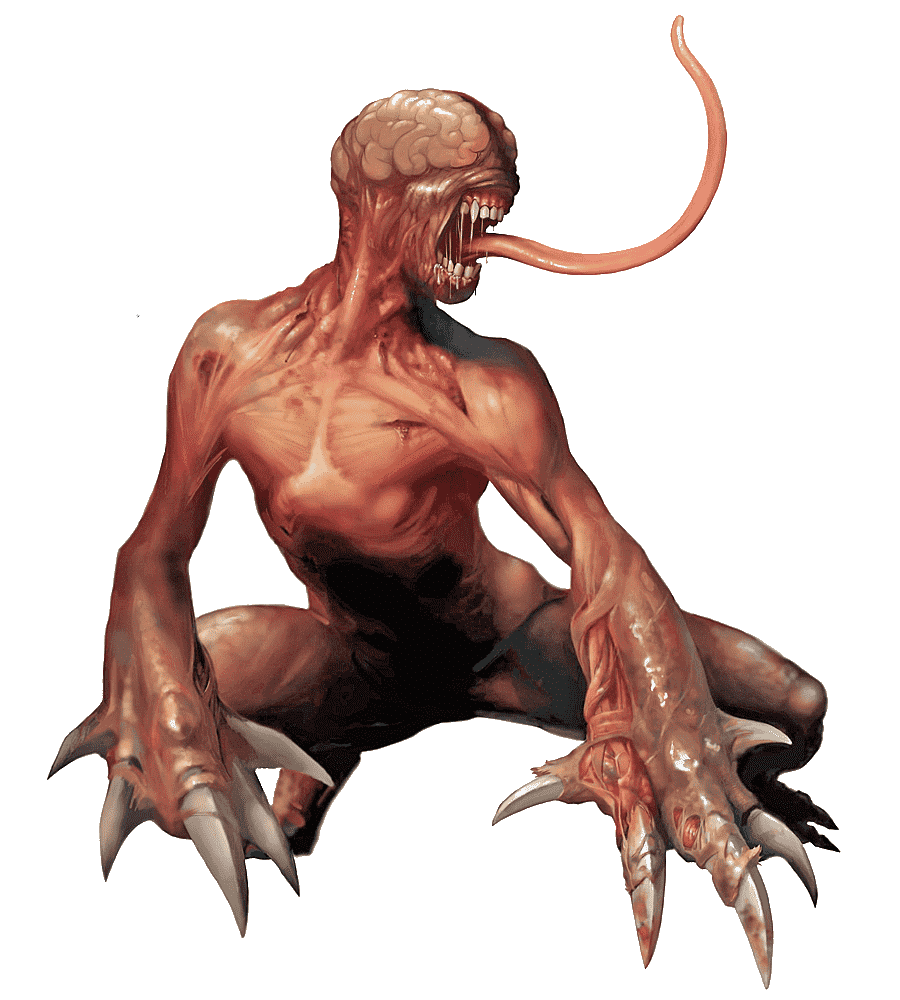 The Licker was an irregular mutant born following a human zombie’s secondary exposure to a new t-Virus strain. This new variant was developed by William Birkin at the underground laboratory following experimentation on the mutated V-ACT strain recovered from the Arklay mansion. Although the circumstances and process when these mutations occur are similar, the main difference is the end result. The V-ACT strain will transform an incapacitated zombie into a Crimson Head whereas this new strain will slowly mutate a zombie that is near death into a Licker.

When the t-Virus creates a zombie, the metabolism process is sped up, creating a constant state of hunger leading the subject to seek out and consume flesh from other organisms, including their own kind. When they are unable to find enough sustenance to sustain their energy levels, they will go into a hibernation state close to death. In certain subjects, the t-Virus then triggers a unique reaction. With the mutated strain from the mansion, this was the V-Act process which led to a Crimson Head. But the refined t-Virus variant developed from that strain, triggers the production of new cells within the body creating an altogether different mutation.

The subject’s brain expands to the extent where it shatters the skull and becomes visible. The skin also deteriorates to expose a completely reformed muscle structure that allows the new creature to carry out movements and feats of agility impossible for a regular zombie, including faster movement and jumping great heights and distances. Their bone structure also altered dramatically, enabling them to move around on all fours. In addition, their hands mutated and became larger,and their nails transformed into large claws, similar to that of a T-002 Tyrant.

The Lickers used these claws to dig into surfaces and combined with their increased muscle in their legs. This allowed them to move across walls and ceilings with minimal effort, giving them the opportunity to lay in wait and ambush their prey. Because of their enlarged brain, the eye cavities were completely concealed, leading to a rapid degeneration of ocular perception and eventually blindness. This meant Lickers could not track their prey by sight and was a severe weakness, rendering them highly susceptible to silenced weapons. But to compensate for this, the Licker developed a very highly-evolved form of hearing and attacked when detecting even just the slightest sound from any potential target.

When prey was detected, the Licker adopted an attacking stance by standing up on its rear legs. It attacked full-on with teeth or its lance-like tongue which was able to constrict and peel the skin from its victims. Their tongues could stretch to a great distance and this trait how they were originally given the name ‘Licker’ when discovered by members of the Raccoon City Police Department. A Licker could also attack with its front talons and would typically let out a piercing screech before leaping from a great distance. When in a dormant state, its breathing can also be heard.

Lickers develop as they grow and when in infant stage they are much smaller and nimble with hardly any muscle. When fully matured they are bigger, with substantial muscle mass and fully-formed, larger claws. When first observed, the Licker was just a curious mutation originally believed to be a ‘wild Tyrant’ given its similarities to the early T-Type models. The Licker remains one of Umbrella’s most popular products and long after their collapse, is still one of the most desired biological weapons by prospective customers.

EVOLVED LICKER – The Evolved Licker was the result of Umbrella’s attempt to weaponize the irregular Licker mutant that was first observed when testing the modified ε-strain t-Virus. Although impressive in its original form, the evolved Licker was larger with increased muscle density. Their skin turned green and developed scales, giving them a reptilian look. Their senses were also sharpened and instead of three claws on their hands, the Evolved Licker had a single, larger, claw that could be used for stabbing. But despite the differences in colour, durability and claw size, it still attacked in the same manner as the regular Licker. Additionally their jumping skills were also improved thanks to greatly enlarged front legs.

The base specimen for Evolved Lickers were ‘improved zombies’ and they could move around much faster than their regular counterparts. This variant would be mass-produced firstly on Sheena Island, then later across the world and was one of Umbrella’s most popular products on the B.O.W. market. 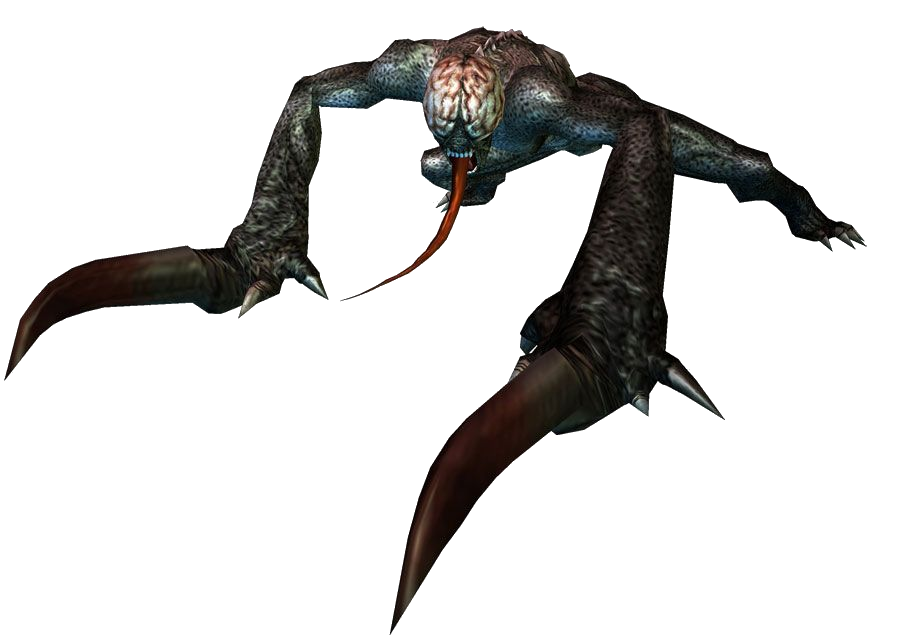 LICKER BETA – A newer variant of the standard Licker, created by injecting the T-Virus mutation with a further dose of Progenitor Virus. The result saw the loss of some of the more recognisable features, but it did grow in mass and ferocity.

The Licker Beta was created by Tricell after they acquired access to the African Research Facility and the Sonnetrappe flowers. 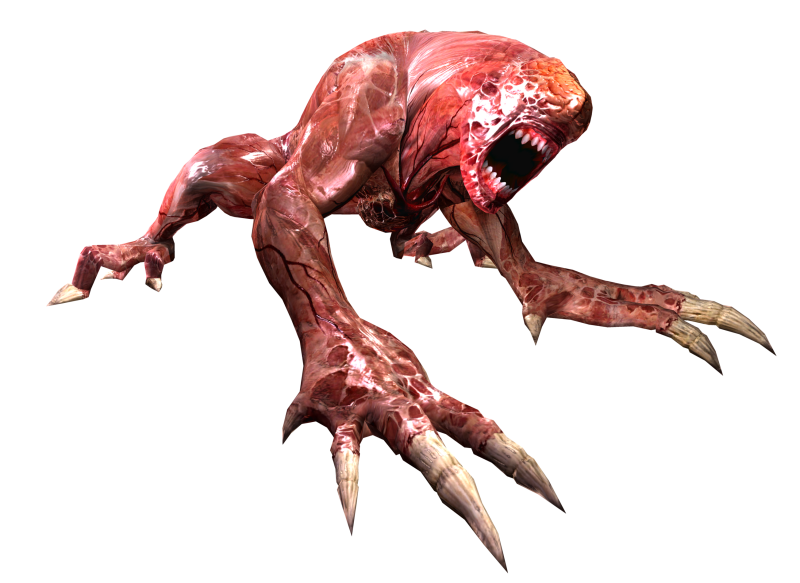 REGIS LICKER (SUSPENDED) – The Suspended was a one of a kind, unique mutation that occurred when a female zombie was secondarily exposed to the new strain of t-Virus. For reasons unknown, she developed several unusual mutations whilst still regaining much of her original human appearance. It is not known why she didn’t develop into a full Licker specimen, despite having several traits such as the lance-like tongue and the red-sinew flesh appearance due to the blood congealing beneath the skin. But its legs did not fully transform and develop claws, meaning it could only dangle down and hang from surfaces rather than crawl along them.

In addition, its brain did not expand enough to break through the skull and therefore it retained the use of its eyes and kept its hair. When the Suspended was originally just a zombie, it had its stomach ripped open and when it mutated further its internal organs became exposed. But unlike a Licker, the Suspended developed no increased muscle and its hands did not develop into claws. It also had several strange, bone-like protrusions on its right arm. Its tongue was longer than that of a regular Licker and used it as a whip to lash at its victims and even wrap around their necks and try to strangle them to death. It also possessed an ability to emit a unique sound that attracted nearby Lickers to its location.

Only one of its kind was ever recorded and it was sometimes also referred to as ‘Regis Licker.’ Unfortunately this unique specimen was destroyed before further study could be undertaken. 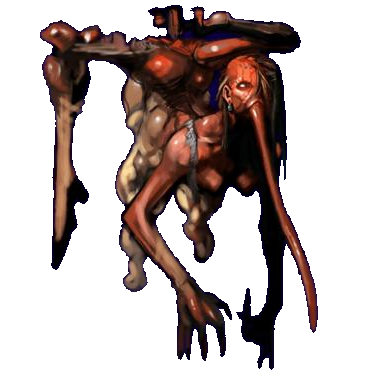