Lily Klein was a resident of Sheena Island, moving there when Umbrella purchased the island and her father became head of the Genetic Engineering Research Department at the Tyrant Plant. She led a happy and ordinary life alongside her brother, Lott, who was four years older than her. She was far too young to understand anything about Umbrella who employed and housed everyone on the island and remained blissfully ignorant to the insidious work that her father supervised at the factory. Like all the children on the island, she was educated to believe that Umbrella Corporation was elitist and that outsiders not affiliated with the company should not be regarded as ‘ordinary people’. 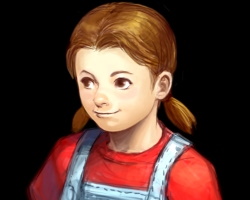 Lily’s happy life came crashing down around her when the city at the heart of the island was engulfed in a t-Virus outbreak. Her parents soon become infected and desperately shouted for her to run and escape before transforming into zombies and attacking her. Lily and Lott ran into town and took shelter at the Umbrella building opposite the Heaven’s Night nightclub. Lily waited there whilst Lott went off to look for help. After becoming bored waiting, Lily began to fiddle with the controls and listened to several recorded conversations between Vincent Goldman, the island’s commander, and his mother. It was there she was found by Ark Thompson. But before he could question her, Lott returned and he and Lily escaped. Together they fled down the canal and back to their house in the suburban area. Lott went ahead to the factory whist Lily hid in the wardrobe of her bedroom. She was again found by Ark and he gained her trust by vowing to save her brother.

After finding Lott, all three of them escaped from the island on a helicopter. What became of Lily after the events of Sheena Island, remains unknown.