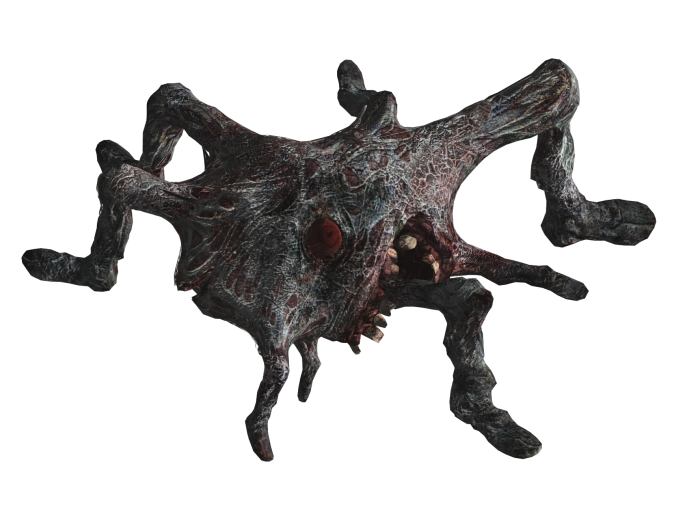 Little Crawlers (development code WH-01A) are small spider-like creatures birthed from the larger Mama Molded B.O.W.s. They will scuttle around and swarm their prey, working in groups and emitting small screeching and chirping sounds. Their small appearance is nothing more than small, flat mounds of flesh, possessing seven appendages resembling legs that are used for ambulation, a single blood-red eye, and a large mouth full of teeth. They are born directly from a Mama Molded, which forms mycelia embryos inside its body which gradually mature and evolve into a small creature spawned from the white fungal colony.

As it grows larger the Mama Molded’s skin swells, creating a tumour-like effect across its body. Eventually, the Little Crawler is strong enough to push itself free and the tumour will burst, allowing the newly formed creature to escape. Although they have inherited the White Mold, they are nowhere near as durable as their mothers, and can be easily killed without the need for special RAMROD ammunition. Even a sustained stab wound from a knife is enough to kill one. This makes any potential military applications for these creatures extremely limited, although they are still dangerous in groups. They will use their legs to leap powerfully at their victims, targeting exposed faces and using their mouth and teeth to rip away large chunks of flesh. Their other main form of attack is to jump and clamp onto their victims before self-destructing and spraying acidic bodily fluids everywhere.

Little Crawlers also have the ability to scuttle up walls and ceilings and will often hide directly above their prey, only to suddenly drop down from above and surprise their prey.