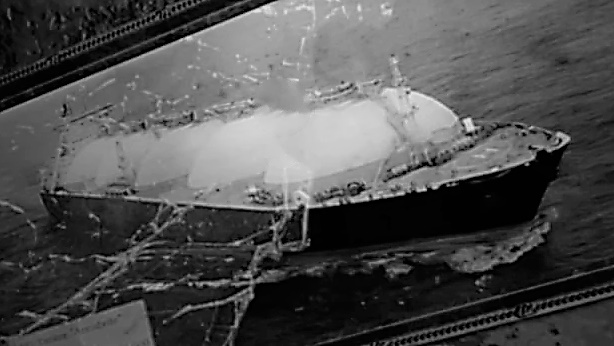 The LNG Annabelle was a typical fuel-driven containervessel specifically designed to transport large volumes of liquids or gases in bulk. It was constructed with a deadweight tonnage of 71,000 and was948 feet in length. It had five large, circular storage tanks located along the centre-line of the vessel. Surrounding the tanks was a combination of ballast tanks, cofferdams and voids; effectively giving the ship a double-hull type design. Each tank contained two main cargo pumps used for discharge operations and a third, smaller spray pump used for extracting liquid LNG to be used as fuel via a vaporiser, or for cooling down the cargo tanks. All three pumps are contained in a specialised tower hanging from the top of the tank and down the entire depth. The pump tower also contained the tank gauging system and the tank filling line, all of which were located near the bottom of the tank. All cargo pumps discharged into a common pipe running along the deck of the vessel; it branched off to either side of the vessel to the cargo manifolds, which were used for loading or discharging. All cargo tank vapour spaces were linked via a vapour header which ran parallel to the cargo header. This also had connections to the sides of the ship next to the loading and discharging manifolds.

The Annabelle was constructed over seven levels from S3 at the bottom to Level 4 at the top. Stairwell annexes ran the height of the ship and an elevator operated from S2-Level 4. The tanker had a comprehensive CCTV system, alarms would sound in any emergency situation and steel shutters would automatically seal off portions of each deck. Several floors also had secure safes on the wall containing remote bombs to be accessed by security personnel only. The ship was powered by two main engine rooms.

In 2014, the Annabelle was on a routine transportation cycle. At this time the vessel was under the command of Captain Ed Carlile. His first officer was Giovanni Finetti and second officer Clark C. Walsh. The Chief Engineer was Paul Fitzgerald and the main mechanic working under him was Dwayne Chalmers. Jim Stockman was the Communications Technician and the Physician was Gerald Waddell. Making up the ship’s compliment was a team of maintenance staff and a working crew to maintain and load/unload the cargo. But what made this journey unique was they had recently picked up three civilian passengers who were hitching a lift. Officially they were distant relatives of the captain which is why such an usual practice went overlooked by the rest of the crew, but in reality the passengers were the E-001 bioweapon ‘Eveline’ and her two handlers, Mia Winters and Alan Droney. Mia and Alan were agents working for ‘The Connections’ and following reliable intelligence that Eveline was under threat of abduction by rival organisations, the corporation had ordered Eveline be secretly relocated to The Connections’ Central American facility. Their route would take them along the Louisiana gulf in the midst of hurricane season. Jim Stockman was intrigued by their passengers and wondered why they were transporting on a tanker instead of a passenger ship. He tried talking with Eveline and Alan warned him away. Later in the voyage crew members reported hearing the girl’s laughter and being freaked out by her.

A key aspect of Eveline’s control protocol was her two handlers playing the role of her parents. Mia was very attentive to Eveline as her ‘mommy’ but Alan was less successful at convincing at playing the father role, so much so that Eveline began to discard him and she no longer perceived him as her ‘daddy’. This incident caused Eveline to get loose on the Annabelle and run amok, vomiting up bio-matter far in excess of her body mass and creating countless Molded. The crew soon came under attack and the ship fell into panic, drifting way off course in the hurricane and crashing into the swamplands of Louisiana. All the crew were killed in the ensuing mess and the natural gas cargo on board ignited and exploded, almost tearing the tanker in two. The wreck lay ensconced amidst the marshlands and blanketed by a thick expanse of trees. A search and rescue operation was launched in the Louisiana gulf by the National Guard going off the Annabelle’s last known position but thanks to the storm she was many miles off her charted course and her wreckage was never found by the authorities.

4TH FLOOR: – Housed the main bridge and control station for the tanker. Also located on this floor was the captain’s cabin. Locked in a cabinet here was a machine gun in case of mutiny problems. A map of the world was on the wall as well as an old ship’s wheel as a decorative piece on the wall.

3RD FLOOR: – Contained the main security room with readouts and control panels monitoring various systems and automated machinery on board. The main control room was also here as well as the shower room, sick bay and infirmary.

2ND FLOOR: – This floor is the main hub of the ship and had the largest attempt at decoration with sections of the floor covered in carpet and old pictures hanging from the walls. The main kitchen was located here alongside the dining room for crew. Adjacent was the break room with a sofa and chairs for relaxation when off duty. Another door in here led to the lounge with a safe containing a trick lock activated by aligning various paintings on the wall to exactly match their opposite counterparts. Also on this floor was a large bunk room for crew also containing a small diner. On the opposite side of this floor was the main guest cabin containing furniture and a double bed. This is where Mia, Alan and Eveline stayed.

1ST FLOOR: – This area was in the centre of the ship and contained the main laundry room with banks of washing machines and dryers. A stairwell leading back to S1 was sandwiched between the laundry room and a small stockroom. There was also several bunk rooms for crew and a recreation room. Finally, a maintenance room essentially doubled as an office for storing paperwork and computer records.

S1: – Contained more metallic corridors full of rivets, bulkheads and junction boxes, all connected via a network of pipes and cables. Amongst other rooms a large office was located on this level.

S2: – Contained a shower room and a small canteen with lockers. It also housed the number one and number two engine rooms and the main cargo bay. Numerous connecting corridors with large pipes and regulating machinery was installed throughout. A small storeroom was located near to the first engine room for holding luggage and small cargo. Other storerooms contained metal shelving racks full of equipment and green gas cylinders.

S3: – The lowest part of the ship and a maze of metal corridors and bulkheads. There was a central corridor down here with four cabins on either side. A door at the far end led to the main stairwell annex running the height of the ship, with access to every floor.