The Los Illuminados were a religious group native to a rural region of Spain in Southern Europe. Very little is known of them other than they encountered and worshipped the Las Plagas, believed to be sometime in the 18th Century. Even less is known of the religion they practiced, yet their lack of contact with outside communities suggests it was not favourable and certainly in opposition to the paganism preached by the first Lord Salazar. Old cave drawings and murals found in the cliff dwellings of a small island depict cult members performing ritual sacrifice and removing the hearts of their victims, all performed under their cult insignia which was purposefully designed to look like a mature Plaga parasite. 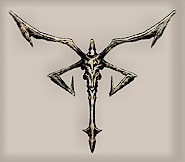 They discovered the parasite, buried in the rocks ready to emit their spores when someone wandered too close. Once they discovered the parasite they named it ‘Las Plagas’ which meant ‘the plagues’ and accepted it into their own ranks. They took the Plaga into their bodies as part of a religious ritual. They also used the parasite to recruit more followers and increase their numbers, being able to use the parasite’s powers to manipulate even unwilling subjects. The name Illuminados means Enlightened and they often refer to themselves as the Enlightened Ones.

Modern members traditionally dress in red or black robes and cowls, though murals depict older members from generations past wearing the traditional white robes of priests. No concrete details are known about the structure of the cult or its hierarchy, how they were funded or where exactly they were based, though it is believed they originally resided centuries ago on a small island located off shore several miles from Salazar castle. They were secretive, kept themselves out of everyday sight and used fear and myth for protection.

It was unfortunate for the Los Illuminados that they found an enemy in the form of the first Salazar Castellan. He saw the danger of the cult and promptly rounded them all up, taking away all their rights and powers. This was done very quickly before the cult could grow too large in number and the first Lord Salazar would never know just prevented the world’s first major biological outbreak. Las Plagas were taken away from the group and sealed deep underground beneath the very foundations of Castle Salazar. The remaining members of the Los Illuminados at that time quietly slipped into the background, never to be heard from again. They were under exile, but still they survived.

The Illuminados next emerged in the early years of the 21st Century. Osmund Saddler had grown up with the teachings of the cult, becoming a fully-fledged member and eventually their leader. He knew all about the legend of the Plaga and knew they needed to take that power back if they were to have any dominance in the modern world. The nearby castle where the Plagas were held was still under ownership of the Salazar family who by this time were now onto their eighth Castellan. After doing some research, Saddler came to know a young man who at only 20 years old could easily be manipulated. Saddler visited the young Ramon Salazar and preached him the teachings of Los Illuminados, explaining that the cult were not evil and that Salazar’s great ancestors had committed a sin for banishing them. Salazar spent many long nights in his library by candlelight pouring over old documents and journals of the time and Saddler eventually won him round. He told of how he wanted to use Las Plagas as a force for good and create a world that was totally free of all sin. In a world dominated by Las Plagas, everything would stabilise with all the infected sharing the same thoughts and desires, eliminating the inconsistencies and diversity of humans intent on destroying everything. Eventually, Salazar relented and was accepted into the ranks of the Los Illuminados in exchange for granting Saddler access to the caverns under his castle.

When Ramon released the Plagas seal no one thought they could be brought back to life. However, Plaga remains were found to be fossilized in the rocks. Although they appeared to have expired, they were able to survive by lying in a dormant state at a cellular level and remaining in a spore-like form. Salazar recruited local people from the village to travel to the castle and excavate the mines. The working men unknowingly inhaled the spores and became infected, giving birth to a new generation of Las Plagas parasites.

Some years later, these same villagers became the first Ganados and the village chief Bitorez Mendez, himself a life-long Los Illuminados preacher, gradually brought the residents round to the cult’s teachings. Now with some of the villagers under his control, Saddler infected the rest of the village via direct injection of Plagas eggs in the guise of a religious ceremony. It is believed Saddler used these Ganado to construct a primitive off-shore base on the same island still within view of Salazar castle. They recruited a private Plagas-infected militia and a heavily armed battleship was also included. The cult also hired countless researchers such as Luis Sera to study the parasites in greater detail, and others conducted genetic experiments and gene-spicing, using the Plaga
to fill in the gene-sequence gaps and producing B.O.W.s such as the Regenerador, Novistador, U-3 and El Gigante.

As well as Saddler himself, Bitorez Mendez, Ramon Salazar and Jack Krauser were also given Dominant Strain Plagas. Mendez was in control of the village Ganado, Salazar was controlling the castle zealots, and Saddler himself controlled the island forces. The Los Illuminados end game involved the capture of Ashley Graham, the daughter of the President of the United States, and injecting her with the parasite. Once infected, she would be sent back to the U.S. in exchange for a large ransom and the parasite would hatch, proceeding to infect the entire US administration and effectively bring the entire world to Saddler’s fingertips. However due to the actions of Leon S. Kennedy, these plans were destroyed and Saddler was killed.

In the fallout of the South Europe incident most believed the Los Illuminados were destroyed and banished to myth and legend once again. However, surviving members went into hiding and privately burned for revenge against the United States. The cult employed many individuals as envoys to the outside world, and one such individual was a man named Patricio. He later went into narcotics trafficking but kept in contact with the cult as an information broker. At some point, the Illuminados came into contact with black-market weapons dealer Glenn Arias and a deal was struck. Arias was granted access to the original development data for the Dominant Strain Plaga and used it to further perfect the A-Virus; a new biological agent with an engineered trait to detect friend from foe. The DNA nucleotides from Las Plagas was a key element into making this application a success. In exchange for this information, Arias promised to conduct a large-scale bio-terror attack on the United States on behalf of the Los Illuminados as revenge. This plan was to unleash the perfected A-Virus on New York City. Patricio later discovered this plot and managed to flee Spain, but the cult threatened his wife and daughter. He desperately sought out Leon S. Kennedy, wanting to provide information on the bio-terror plot in exchange for Leon rescuing his family, but he was later murdered by associates of Arias. The attack on New York City was carried out in 2014 but the catastrophe was largely averted thanks to the combined efforts of the B.S.A.A. and the D.S.O. No further information on the Los Illuminados exists at present.